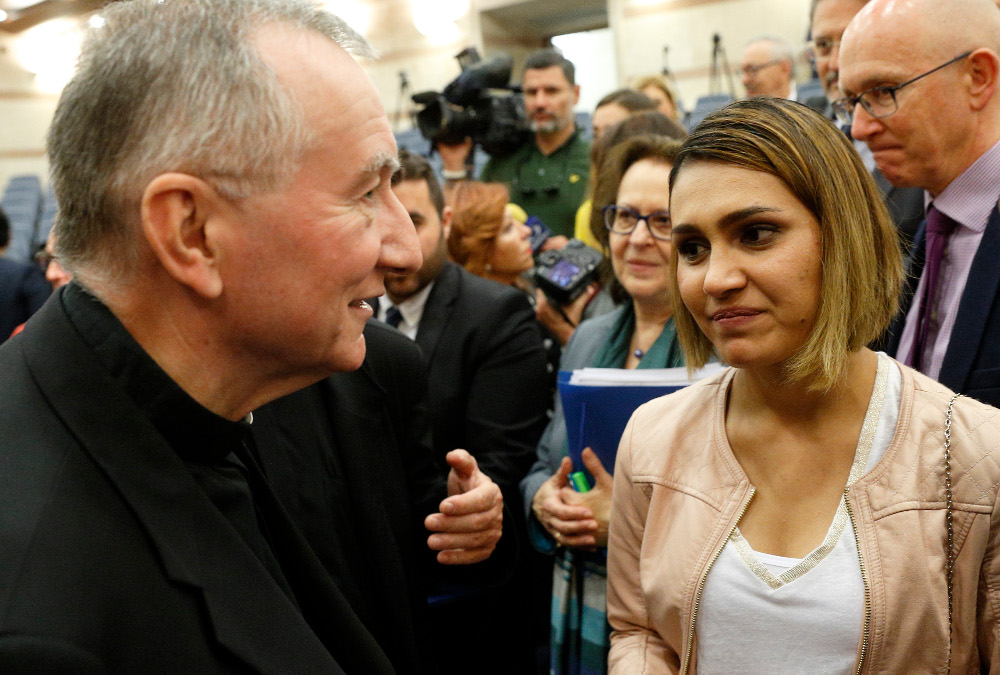 Cardinal Pietro Parolin, Vatican secretary of state, talks with Salwa Khalaf Rasho, a human rights activist who escaped Islamic State captivity, at the conclusion of a symposium on religious freedom presented by the U.S. Embassy to the Holy See in Rome June 25. (CNS/Paul Haring)

A Pakistani archbishop has warned about the "gradual erosion" of religious freedom in his country, saying the nation's caretaker government has not been able to control vigilantism undertaken by religious extremists.

Karachi Cardinal-designate Joseph Coutts, who will become Pakistan's first cardinal in 24 years during a Vatican ceremony June 28, said a law in his Muslim-majority country meant to prevent blasphemy against Islam is "being very easily misused."

"It's causing a lot of problems right now," said Coutts, speaking at June 25 event on religious freedom co-hosted by the U.S. embassy to the Holy See, Aid to the Church in Need, and the Sant'Egidio Community. "People are being killed ... just because of an accusation."

"Our government is not strong enough to control the kind of extremism that has developed in the country," he said. "It is enough to accuse someone of blasphemy ... and you're finished."

Coutts, who has led the Catholic community in Pakistan's largest city since 2012, is one of 14 prelates Francis has chosen to elevate to cardinal this week. Pakistan's last cardinal was Joseph Cordeiro, one of Coutts' predecessors in Karachi, who died in 1994.

The June 25 event, titled "Defending International Religious Freedom: Partnership and Action," highlighted a number of faith communities in different parts of the world that have suffered violence.

One of the speakers at the conference was a Yazidi from northern Iraq, who escaped enslavement by the so-called Islamic State and is now living in Germany. Another was an activist who has worked to help some 700,000 Rohingya Muslims now living in Bangladesh after suffering persecution in Myanmar.

The U.S. ambassador to the Holy See, Callista Gingrich, opened the event by citing nearly a dozen examples of religious persecution around the world and said it is "a dangerous time to be a person of faith."

"All of us gathered here today understand that religious liberty and tolerance are bulwarks against the forces of extremism," said Gingrich. "History has shown that governments and societies that champion religious liberty are safer, more prosperous, and secure."

Cardinal Pietro Parolin, the Vatican's Secretary of State, closed the conference by encouraging global governments to raise awareness about the persecution of religious minorities.

Parolin outlined seven elements he called "essential" to protecting minority groups, including "positive collaboration" between religious communities and governments, the "great duty to condemn abuse of religious belief and sentiment to justify terrorism" and educational efforts "to prevent radicalization that leads to extremism."

Salwa Rasho, a Yazidi woman who was enslaved by the Islamic State group for eight months, called on participants to discover the fate of some 3,000 Yazidis still in the group's captivity.

Rasho also asked for the global community to bring areas inhabited by religious minorities in Iraq and Syria under international protection, to set up a United Nations investigation into the Islamic State's crimes and to open borders to Yazidi refugees.

"If this action is not taken, our existence, identity and culture will be wiped out — fulfilling the aim of the Islamic State," she said.

'The tough part lies in the days ahead'

Coutts said that in Pakistan it is not only Christians who face unfair accusations of breaking the country's blasphemy law, but also Shia Muslims. Pakistan is estimated to be 97 percent Muslim, with 95 percent of those Muslims identifying as Sunni.

"We are suffering as Christians, but our Muslim brethren are also suffering," he said.

Pakistan has had blasphemy laws since its time as a British colony, but the laws were expanded in the 1980s under the military government of Muhammad Zia-ul-Haq. Critics say the laws, which prohibit defiling the Koran or the name of the prophet Mohammed, unfairly target minorities and have led to instances of mob violence.

Coutts said the violence is carried out by those with "extremist thinking largely based on emotions." He shared one example of a threat he received after he was invited by Muslim friends to visit their madrassa around Christmastime one year.

He said that some days later he and some of the Muslims received hand-written notes, warning them: "Stop all this rubbish or we'll pull out your tongues."

"What can you do with people like this?" he asked. "This is the reality. I think we've got to look for the answers but I don't know the answers."

In a brief interview with some journalists after the June 25 event, Coutts said he had been surprised by Francis' decision to make him a cardinal. The archbishop said he learned of his appointment when a parish priest offered congratulations to him.

"Of course there's great joy but there's also great responsibility and I don't know how I will be able to live up to it," said Coutts. "That's the big thing. It's nice to receive all the congratulations at this stage, but the tough part lies in the days ahead."