St. Phoebe is depicted in an icon by Eka Fragiadaki of the Angelicon workshop in Crete, Greece. The only person in Scripture identified as a deacon, Phoebe of Cenchreae, near Corinth, is thought to have carried St. Paul’s letter to the church in Rome (Romans 16:1). (Angelicon/Eka Fragiadaki)

Morel, a 42-year-old Catholic mother of four, is in the midst of a five-year education and discernment process with the U.S. Army to become a military chaplain. The problem is, there is no pathway for women to become Catholic chaplains in the military, and the military requires chaplains to be ordained.

If Morel decides to become a military chaplain, her ordination in an interdenominational church would automatically excommunicate her from the Catholic Church, a prospect Morel says feels "heavy and almost paralyzes me."

Seeking support, Morel discovered Discerning Deacons, an organization that brings together Catholics, including women discerning the diaconate, to learn, pray and discern the possible future of a permanent diaconate open to women. Through the group Morel found support alongside other women who are exploring their ministerial calls.

A recent CARA study showed declining numbers in the (all-male) diaconate in the U.S., mirroring overall trends in the priesthood and religious life. The study indicated that in 587 men were ordained to the permanent diaconate in 2020, while 410 deacons retired from active ministry and 378 died that year. About 19,000 deacons minister in the United States today, according to the study.

Inspired by Pope Francis’s vision of a synodal church, Discerning Deacons wants to grow the capacity of the U.S. church, and learn how to practice listening and walking together, said co-director Casey Stanton.

"We want to educate people about the prophetic ministry of the deacon that is connecting the needs of the people and the life of the church on the ground," she said.

Stanton, who worked in interfaith community organizing for 10 years, also ministered in a women's prison as part of a chaplaincy internship while completing her master of divinity degree at Duke University.

"I felt so alive in my work, that God was using me to be a presence of love and accompaniment in a place that was otherwise incredibly dehumanizing for the women I met," she said. "But it wasn’t clear what the vocational path would be." 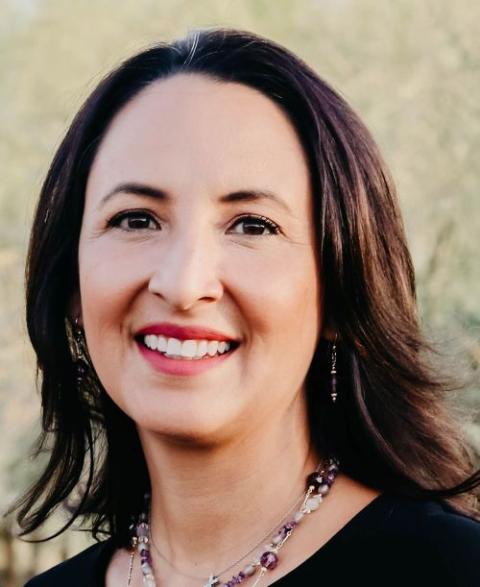 Jessica Morel has found support for her discernment journey through Discerning Deacons, which brings together Catholics to learn, pray and discern the possible future of a permanent diaconate open to women. (Courtesy of Jessica Morel)

Stanton said she was grappling with "women’s experiences of violence that were often a part of their journey," while feeling "in my bones when I would be at Mass on Sunday the absence of women proclaiming the Gospel and breaking open the word."

"I felt that it's all a kind of violence," Stanton said.

Stanton wants the Catholic liturgy to be a place of "healing and freedom," not one that reinforces the "power structures in the world that can lead to women being victims of violence."

She began to ask: "How could I serve?" That was 2016, when the first papal commission on the female diaconate was announced.

She would like all Catholics to take seriously the responsibility to discern the future on the issue of women deacons.

"How can the bishops or the pope make that decision if we aren't doing our own part for the spirit to move in our own lives?"

Like Stanton, Morel's experience accompanying women inspired her desire to minister as a military chaplain. After serving in the army for eight years, as a civilian Morel became active in holistic care for veterans living PTSD, moral injury or military sexual trauma. Simultaneously, Morel took a two-year leadership course at her Catholic parish, inspiring her to use her faith to help women heal.

Morel's work with veterans led to the desire to work with service members "at the moment of injury" as a chaplain. Although an army recruiter told her there is no pathway to become a female Catholic military chaplain, Morel re-enlisted, joining the Arizona National Guard, and began her five-year chaplaincy education and discernment process.

"I really didn’t have my eyes fully open to the limitations of women until I started this chaplaincy process," Morel said. "It has definitely stirred a lot within me, because I've always felt like I was able to do a lot within the church."

Tonight, on the feast of St. Phoebe, Discerning Deacons will hold a virtual prayer service at 7 p.m. EST. More information is on their website.

Female military chaplains are needed to serve women, as well as men, who are sexually abused in the military, according to Morel, who personally knows of five people who were raped while serving.

"I can’t even describe the devastation and the detour their lives have taken, the substance abuse, the desire to die, the ripple effect of generational suffering," she said.

One woman who said she was raped by her commanding officer told Morel that if a woman had been a chaplain at the time, she would have been more comfortable confiding in her. Chaplaincy is the only space in the military that is 100% confidential. Currently, the Arizona National Guard has 16 chaplains, including one woman, serving 8,400 service members, according to public affairs officer David Nunn.

Discerning Deacons has supported Morel through her participation in a small group of women discerning their ministries.

Morel says it brings her "so much courage to know there’s other women with journeys very similar to mine and it helps me to recognize that this has been going on for so long."

Sept. 3, 2020, on the feast of St. Phoebe, a female deacon in the early church mentioned in St. Paul's letter to the Romans, Discerning Deacons hosted a virtual gathering where women, including Kayla August, were invited to share their stories of their call.

“I always say when people ask me about the female diaconate: 'Put me in coach!' " she said.

"I felt so alive in my work, that God was using me to be a presence of love and accompaniment in a place that was otherwise incredibly dehumanizing for the women I met. ... But it wasn’t clear what the vocational path would be."
— Casey Stanton

This fall August begins doctoral studies at Boston College's School of Theology and Ministry with a focus on preaching, after spending the past few years serving as a lay minister at Lyons Hall, a women's dormitory at the University of Notre Dame.

August, who feels a call to preach, said part of her role at Notre Dame was to end Mass with a few minutes of reflection, sharing her take on the week's Gospel reading and her own "spiritual nugget."

August is glad to have had space to preach, but said Catholics are more receptive in the middle of Mass — during the homily  — and should be able to hear from diverse voices at that time. Her biggest concern is that excluding women's voices, especially women of color, August said, has been normalized.

Catholics "miss out on what God may be speaking to us," she said.

As Morel continues discerning her difficult choice about military chaplaincy, she says she keeps hope alive imagining the future of the church and the healing that could take place, if women's gifts were fully recognized.

"I really truly feel that women have this unique gift within us," Morel said. "I stay in wonder of what could be, if women were given the space to fully utilize their gifts."