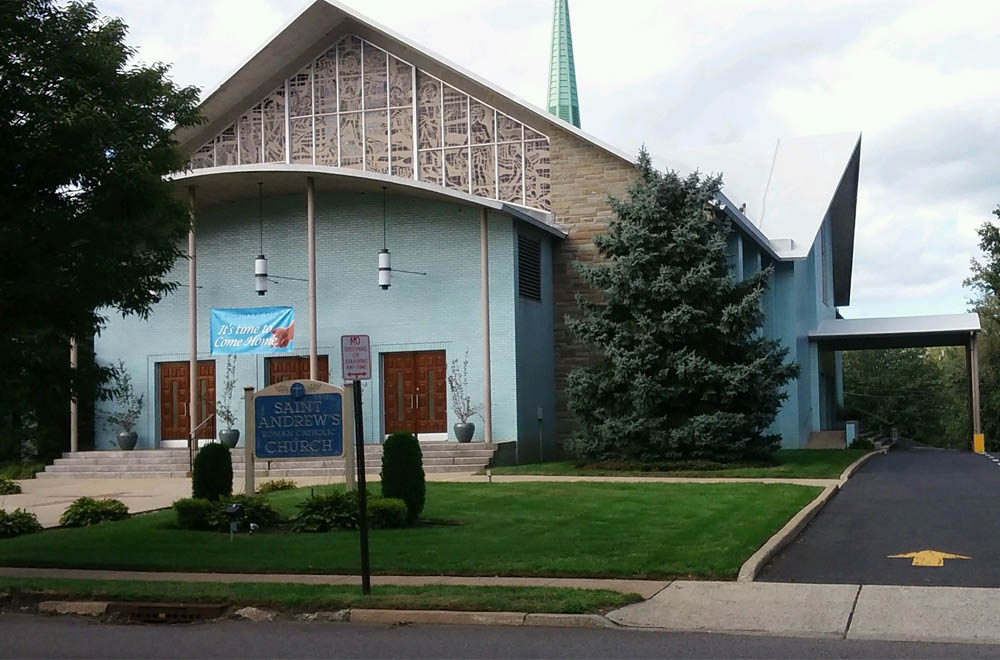 Dark smudges mar the white roof over the altar at St. Andrew's Church here, an indication of how this summer's rains threaten the modernist structure.

But nothing has caved, at least not yet.

At a time of unprecedented fury directed at church institutions, there is an uneasy calm at St. Andrew's. That is despite an allegation directed against the pastor, Fr. James Weiner, that he sexually assaulted then-seminarian Fr. Desmond Rossi in 1988, a charge being investigated by the Archdiocese of Newark.

"I don't want to rush to judgement," Chris Robinson, a parishioner, told NCR after Saturday night Mass at St. Andrew's Sept. 15. But the parish remains divided. "I will not work for the man," said liturgy council member Mike Fitzsimmons, a long active parishioner who occasionally pitches in as an altar server.

Social media input from parishioners reflect the divisions. Some defend Weiner, who from all accounts was a popular pastor since taking over in January of this year. Other social media commentators expressed a wish that St. Andrew's be destroyed.

The archdiocesan announcement, read at Masses Sept. 1 and 2, stated that Weiner was taking a leave from the parish while an accusation of "misconduct with an adult" was investigated. At the Sunday Mass on Sept. 9, a visiting priest defended Weiner, generating a standing ovation for the beleaguered pastor. 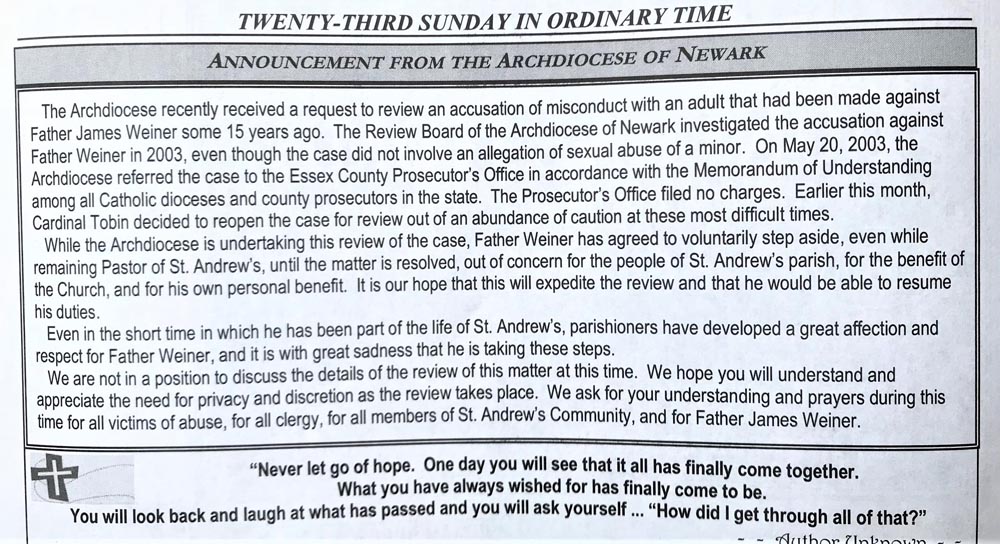 The announcement of Fr. James Weiner's leave in the St. Andrew's parish bulletin for Sept. 8 and 9, the Twenty-third Sunday in Ordinary Time (Provided photo)

Some parishioners have concluded the stories they've seen on the internet about the accusation against Weiner, including reports by NCR, America Magazine and Catholic News Agency, are part of a social media world that can't be trusted, a kind of fake news targeting Weiner. The pastor no longer resides at the parish rectory and was unable to be contacted for this article. But he is still listed as pastor on the church bulletin and on its website, after taking what the archdiocese describes as a voluntary leave.

Rossi, a priest of the Diocese of Albany, New York, studied for the priesthood in his native Newark Archdiocese. He left New Jersey after the alleged sexual assault, which Rossi said consisted of pushing him onto a bed and then forcing oral sex by two fellow seminarians in 1988 at the rectory of St. Benedict's Parish in Newark. Rossi has identified his attackers as Weiner and another man, later ordained for the Newark Archdiocese, who is now deceased.

In 2003, an archdiocesan review board concluded that the charges were credible but unsubstantiated. Weiner continued his career as a priest of the archdiocese while Rossi was given $35,000 by the archdiocese to pay for counseling.

Chris Leyden, another St. Andrew's parishioner, emphasized that Rossi's statements comprise an allegation, and that Weiner is "a man who had dedicated his life to service with a fair measure of acclaim and support."

Parishioners say that in his short time at the parish, Weiner was on the road to revitalizing what had become a moribund parish, situated about an hour's train ride from Manhattan.

Leyden and Robinson said the parish was desperate for pastoral leadership, with problems plaguing the church including some parishioners attending another local parish with a shorter Mass time, as well as the constant issue of the roof leaking. Weiner's homilies and pastoral leadership, including greeting parishioners at both English- and Spanish-language Masses, have won strong support from a sizeable segment of St. Andrew's parishioners. They fondly remember him welcoming a baptized baby to the congregation, holding the infant aloft, mimicking the scene from the movie "The Lion King."

"A lot of people love Fr. Jim Weiner. Some say he can do everything but walk on water," said Leyden. Another parishioner, who wished to remain anonymous, described Weiner supporters at St. Andrew's of conducting "a full-court press to persuade people that we are looking forward to him coming back and that there is no truth to the allegation." 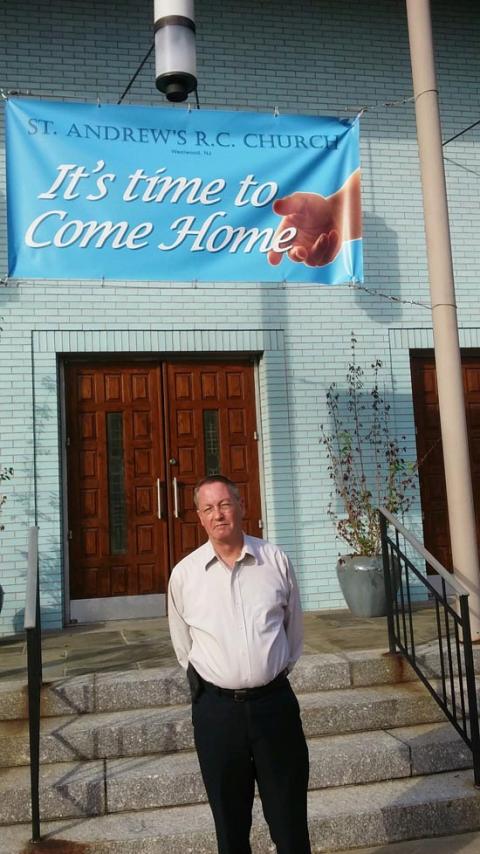 Fitzsimmons is uneasy with the show of support for Weiner in the parish.

While St. Andrew's parishioners have been asked to pray for their pastor, there have been no prayers suggested for his accuser, "nor acknowledgement of the seriousness of the charges against Fr. Jim, which the archdiocese calls assault, but in fact describe rape," stated Fitzsimmons.

Weiner has long denied the allegations. But they resurfaced this summer when Rossi, spurred on by allegations of sexual harassment of seminarians lodged against former Newark Archbishop Theodore McCarrick, came out publicly about his allegation, which Rossi said was now corroborated by another priest. Unlike in 2003, that priest now is willing to say that Rossi talked to him about the alleged incident soon after it happened.

Rossi, for one, is not surprised by the parish's support for Weiner. While there may be widespread anger over sex abuse, allegations lodged against priests who are well-known in a community are frequently disbelieved. He told NCR that Weiner, and the now-deceased priest, perpetrated a "violent sexual assault" upon him 30 years ago. He said he is waiting for the process to play out, and he would like to see therapy and counseling for Weiner, as well as a supervised assignment that would prohibit him from serving as a pastor.

Because the alleged assault occurred against an adult and not a minor, it is likely that Weiner will remain a priest, no matter the findings of the investigative archdiocesan panel. Statute of limitations prevent the case from being pursued by the local district attorney.

Cardinal Joseph Tobin of Newark has been in the forefront of church leaders urging reform. In the aftermath of the McCarrick and Pennsylvania grand jury scandals of the summer, he said in a videotaped message to Newark Catholics that the church can never return to "business as usual."

The cardinal attended a small demonstration outside the Basilica Cathedral of the Sacred Heart in Newark on Aug. 29, which featured Rossi.

On Sept. 14, the archdiocese sponsored a service of healing and repentance at its Newark cathedral, which included a talk by a victim of clerical sex abuse. Tobin has argued that the church needs to embrace complete transparency, including letting civic authorities have access to archdiocesan files.

As of Sept. 18, the archdiocese, via spokesman James Goodness, said the inquiry into the Rossi/Weiner case is continuing, although Rossi said he has yet to be contacted.

Fitzsimmons, for one, needs convincing that the archdiocese is taking the Rossi case seriously.

"I suspect all of this and more to come are part of the playbook that has been run over decades in dioceses across the U.S. The battle is for the hearts and minds of the parishioners as well as the containment of this story by the ostracizing of the whistleblowers. The window for change must come from those of us still in the pews, as many have left organized religion altogether," he said.

On Sept. 18, the remnants of Hurricane Florence hit New Jersey, dumping sizeable amounts of rain over Westwood. The roof at St. Andrew's leaked, but the ceiling still held.

A version of this story appeared in the Oct 5-18, 2018 print issue under the headline: New Jersey parish divided over abuse.