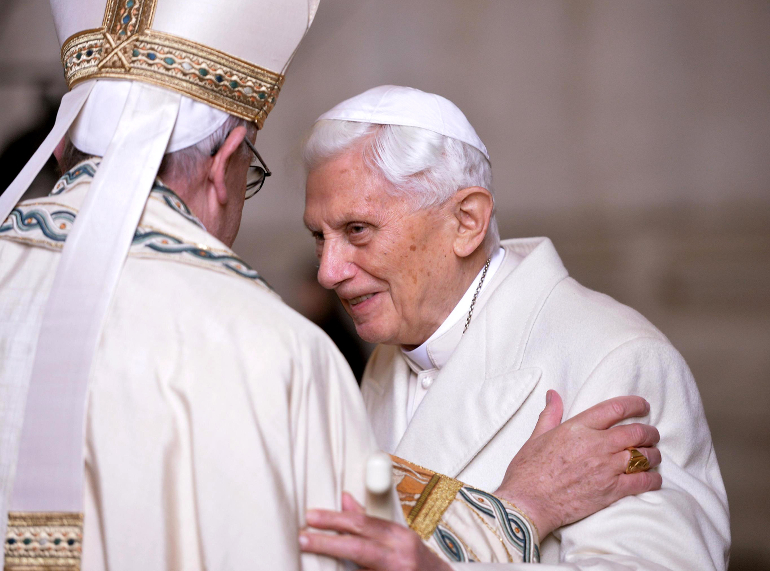 The letter, one of a handful the ex-pontiff has shared publicly since his resignation in 2013, immediately drew criticism from theologians and Vatican watchers. They noted it does not address structural issues that abetted abuse cover-up, or Benedict's own contested 24-year role as head of the Vatican's powerful doctrinal office.

The former pope instead points the finger at a range of esoteric issues, from a supposed societal "mental collapse" brought on by the protests of 1968, to a claim that the sexual revolution declared pedophilia to be "allowed and appropriate," and to "vehement backlashes" by theologians against a 1993 encyclical by Pope John Paul II.

"Among the freedoms that the Revolution of 1968 sought to fight for was … all-out sexual freedom, one which no longer conceded any norms," Benedict says at the beginning of his text.

"The mental collapse was also linked to a propensity for violence," the ex-pope continues, claiming: "That is why sex films were no longer allowed on airplanes because violence would break out among the small community of passengers."

"At the same time, independently of this development, Catholic moral theology suffered a collapse that rendered the Church defenseless against these changes in society," says Benedict.

The Vatican press office did not immediately respond to requests to verify the letter's authenticity, but the city-state's news portal reported on the text at length, saying it was first written for a German magazine for clergy, Klerusblatt.

Release of the letter comes less than two months after Pope Francis hosted a first-of-its-kind summit in February on clergy abuse with the heads of the world's Catholic bishops' conferences and leaders of religious orders.

Francis opened the summit with a promise that the Catholic Church would be taking up new "concrete and effective measures" to confront clergy sexual abuse. Weeks later, he approved the first overarching child protection policy for Vatican city-state.

At the end of his letter, Benedict places the blame for clergy abuse on the lack of appreciation for the role of God in modern society.

After an apparent reference to the famous 1966 Time magazine headline that asked "Is God Dead?", the former pontiff says: "Western society is a society in which God is absent in the public sphere and has nothing left to offer it."

"That is why it is a society in which the measure of humanity is increasingly lost," Benedict continues. "At individual points it becomes suddenly apparent that what is evil and destroys man has become a matter of course."

"Why did pedophilia reach such proportions?" asks the ex-pope, answering: "Ultimately, the reason is the absence of God."

A number of noted theologians took to Twitter overnight to criticize Benedict's take on the root causes of clergy sexual abuse.

"The willingness to blame a permissive culture and progressive theology for a problem that is internal and structural is stunning," said Rubio.

Brian Flanagan, an associate professor at Marymount University in Virginia whose most recent book focuses on the church's need for continual purification, called Benedict's text "embarrassing."

"The idea that ecclesial abuse of children was a result of the 1960s, a supposed collapse of moral theology, and 'conciliarity' is an embarrassingly wrong explanation for the systemic abuse of children and its coverup," wrote Flanagan.

Massimo Faggioli, an Italian who teaches at Villanova University and has written extensively on the Second Vatican Council, noted that Benedict did not mention controversial cases like those of Mexican Fr. Marcial Maciel Degollado, a serial child abuser and rapist who founded the powerful and well-connected Legionaries of Christ.

Benedict investigated Maciel for years before his election as pontiff in 2005, when he was Cardinal Joseph Ratzinger and head of the Vatican's Congregation for the Doctrine of the Faith.

But the serial abuser was not removed from ministry until after the death of John Paul II, when Ratzinger was became pope. Francis recently blamed John Paul's inaction on unnamed "filters" at the Vatican who prevented action from being taken against Maciel.

Also unmentioned in Benedict's letter is disgraced ex-cardinal Theodore McCarrick, who John Paul appointed as the bishop of Metuchen, N.J., in 1981, the archbishop of Newark in 1986, the archbishop of Washington in 2000, and made a cardinal in 2001.

Read this next: Benedict's letter about sex abuse crisis is a regrettable text
A version of this story appeared in the May 3-16, 2019 print issue under the headline: Benedict blames clergy abuse on sexual revolution, Vatican II theology.