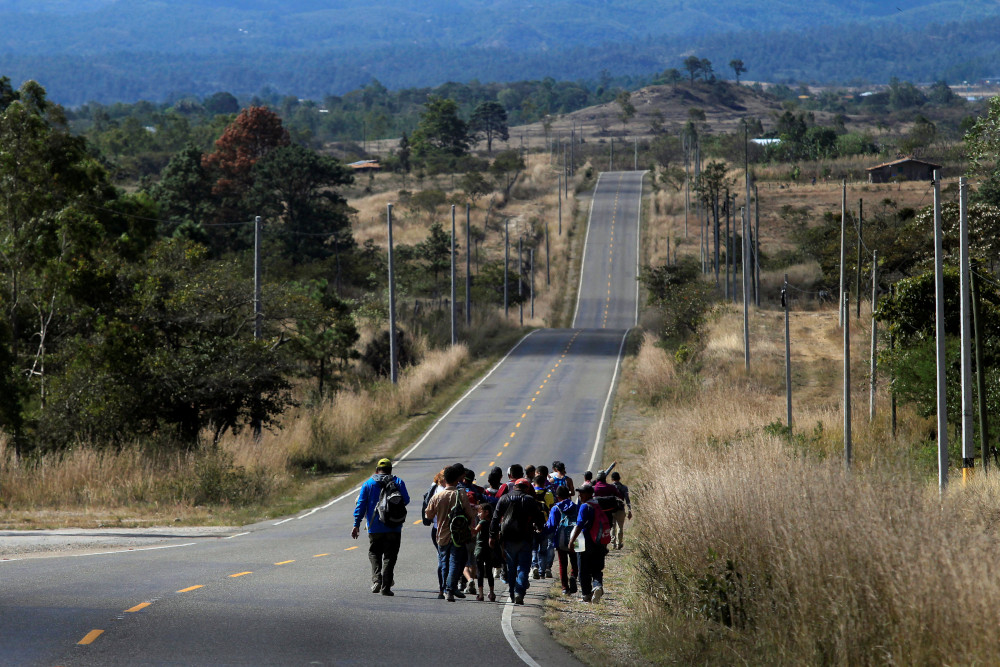 Hondurans in Cucuyagua, Honduras, walk Jan. 15 as part of a new caravan heading to the U.S. (CNS photo/Jorge Cabrera, Reuters)

Migrants from across Honduras set out from San Pedro Sula for the border with Guatemala early Jan. 15, hoping to reach the U.S. border amid controversies over fortifying the southern frontier with a wall.

News reports said participants were responding to social media posts promoting the caravan and organizing themselves via WhatsApp messages.

The caravan follows the path of a previous mass of migrants, who traveled through Guatemala and Mexico last fall to the border city of Tijuana. That caravan -- which was followed by other smaller caravans -- captured enormous media attention. U.S. President Donald Trump tweeted his disapproval, calling the mass of migrants an "invasion" and sending troops to the southern border.

Observers said migrants are attracted to caravans because they see security in traveling as a large group. That just over 5,000 travelers arrived in Tijuana -- and that a few were able to enter the U.S. and make asylum claims or get onto a long waiting list to do so or find illegal entry into the United States -- encouraged more people to try their luck.

"For many people, the simple fact that they're in a place where they're being fed and their life is safe, that's seen as success," said Scalabrini Sr. Lidia Mara Silva da Souza, head of the Honduran bishops' human mobility ministry. "The fact that a relative or friend has traveled in the previous caravan and hasn't been deported is motivation for other people who are joining this caravan."

Difficulties at home such as poverty and violence also push potential migrants to leave, while governments in the region have done little to promote development or curb poverty, according to observers.

"What's happening is that the current economic, social, and political systems in Honduras are out of the government's hands. They can't form a migration containment policy," said Jesuit Fr. Ismael Moreno, founder of Radio Progreso in Honduras. "The populace's situation is bad enough that the government can't convince or stop people from leaving the country."

The Honduran government has run ads warning migrants of risks of the road, while the charge d'affaires at the U.S. Embassy in Honduras, Heide Fulton, recently told potential migrants "not to be fooled" and urged them to stay put.

Even though homicide rates have fallen in the region, Moreno said the admonishments do not work due to the desperate situation in Central America and the unpopularity of its governments.

"Migration is a desperate exit," Father Moreno said. "It's a situation of inner defeat. It's a situation of frustration where you don't care about the risks along the way, nor the threats that you'll receive arriving to in the U.S. What is important is getting out of the country."

While many fled due to gang violence, the forced recruitment of minors into gangs and extortion payments, most migrants traveling in the first caravan of Honduras said they were unable to make ends meet, as the price inflation of a basic basket of goods outpaced the growth of their wages or increases in the minimum wage. The price of electricity also tripled after the privatization of the state utility, making it "too much for a low-income family," said Ismael Zepeda, economist with the Honduras think tank FOSDEH.

"The minimum wage doesn't buy anything, despite being the highest in Latin America," Zepeda said. "That's why in the caravan, people leave, even though they have jobs."

Other factors are prompting people to abandon Central America, including low prices for commodities such as coffee, the early effects of climate change and drought.

"There are lots of people in Honduras in the caravan who left because they had drought the past four out of five years -- so climate change is also a factor," said Rick Jones, migration adviser at Catholic Relief Services in El Salvador. He also cited lack of opportunities in Central America and the possibility of family reunification.

"All of that goes into the mix when someone is making their decision," he said.

Mexican Interior Minister Olga Sanchez Cordero said eligible migrants would be provided with temporary permits to transit the country or stay and work. Those ineligible or entering the country illegally would be turned back or detained and deported.

A new administration came into office in Mexico Dec. 1, promising to respect the human rights of migrants -- who have suffered atrocities such a rape, robbery and kidnap while traveling through Mexico -- though migration policy details are still to be announced. A proposed plan to force migrants to wait in Mexico while their asylum claims proceed in the United States has not been implemented.

The new caravan caused some disquiet for the operators of Catholic-run migrant shelters. Jorge Andrade, director of a collection of shelters, said caravans present problems such as collapsing local infrastructure for migrants and an inability to screen the travelers they're serving. The price of hiring a human smuggler to take migrants across the U.S. border also has increased, he said.

Javier Urbano, who studies migration as a professor at the Jesuit-run Iberoamerican University, says the shelters traditionally provide humanitarian assistance to migrants -- a place to eat, sleep and rest -- but are being pulled into politics with the rise of caravans, which are visible and inevitably become political.