The new missal: an overview of the changes 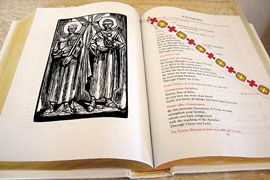 The Vatican has formally approved a new English translation of the Roman Missal -- a translation that will change some of the words with which Roman Catholics have worshiped throughout the English-speaking world for the past 40 years -- the U.S. Conference of Catholic Bishops announced April 30.

Among changes in the congregational responses to the priest at Mass, perhaps the most obvious will be “And with your spirit” as the people’s response to the celebrant’s “The Lord be with you” and “The peace of the Lord be with you always.” The current response to both those invitations is, “And also with you.”

Words in the Gloria, Creed and other significant parts of the Mass will also be changed.

The U.S. bishops’ conference has not announced -- or even decided yet -- when the changes will take place.

But this reporter’s best guess, based on past practices, is that mandatory use of the new translations will almost certainly begin nationwide on the first Sunday of Advent in 2011. Whether there will be a period of optional use before that remains to be seen.

Cardinal Francis E. George of Chicago, conference president, told Catholic News Service in Rome April 29 that he expected final Vatican approval of specific U.S. adaptations to be given by the end of May this year.

If that deadline is met, it will likely still take the next several months for bishops’ conference officials to create a definitive, error-free electronic version of the entire new Roman Missal in English to present to publishers. The other major hurdle before implementation is the education of parish priests and of Catholic parishioners to help them understand the changes and make them receptive to them.

Besides changes in daily Mass prayers, almost innumerable other minor changes will be made. These will be in once-a-year antiphons, priest’s prayers on specific feasts, or once-every-two-or-three-years Lectionary readings from scripture. These will almost never be noticed by the average Catholic parishioner -- only by experts who study those issues.

What will be noticed most of all are the responses of the congregation to the celebrant and the prayers that the entire congregation prays together in ordinary Sunday Masses.

One key passage in that document says, “The translation of the liturgical texts of the Roman liturgy is not so much a work of creative innovation as it is of rendering the original texts faithfully and accurately into the vernacular language. While it is permissible to arrange the wording, the syntax and the style in such a way as to prepare a flowing vernacular text suitable to the rhythm of popular prayer, the original text, insofar as possible, must be translated integrally and in the most exact manner, without omissions or additions in terms of their content, and without paraphrases or glosses. Any adaptation to the characteristics or the nature of the various vernacular languages is to be sober and discreet.”

That is the ruling dynamic in the new English translation of the Roman Missal that U.S. and other English-speaking Catholics around the world will be implementing when the new translation takes effect throughout those countries.

Liturgiam Authenticam was a major reversal of the worship congregation’s original postconciliar translation rules, spelled out in 1969 in its document Comme le Prevois, which encouraged various translators to adapt the original Latin liturgical language in their countries to contemporary linguistic and cultural conditions.

The 1969 instruction encouraged dynamic equivalence translations over more formal or literal translations when the cultural situation might seem to call for it; the 2001 instruction gives high priority to more literal translations from the Latin even when they might not be readily understood by the local culture. It argues that the church’s liturgical language ought to inform culture, not be dependent on it.

To prepare people for the changes, the U.S. bishops’ conference has already launched several major efforts. It has scheduled more than 20 workshops around the country this year for priests and diocesan leaders, and it has built a Web site, www.usccb.org/romanmissal, devoted to spelling out and explaining the changes.

A few of the other major differences churchgoing Catholics will immediately recognize when the changes go into effect are:

The most obvious change in the new translation of the Confiteor is the restoration in English of the Latin triple declaration of culpability for one’s sins, accompanied in the new rubrics by restoring the physical action of striking one’s breast three times with the right hand -- mea culpa, mea culpa, mea maxima culpa, “through my fault, through my fault, through my most grievous fault.”

New version:
Glory to God in the highest, and on earth peace to people of goodwill. We praise you, we bless you, we adore you, we glorify you, we give you thanks for your great glory, Lord God, heavenly King, O God, almighty Father.
Lord Jesus Christ, Only Begotten Son Lord God, Lamb of God, Son of the Father, you take away the sins of the world, have mercy on us; you take away the sins of the world, receive our prayer; you are seated at the right hand of the Father, have mercy on us. For you alone are the Holy One, you alone are the Lord, you alone are the Most High, Jesus Christ, with the Holy Spirit, in the glory of God the Father. Amen.

All things considered, any arguments for or against “I believe” versus “We believe” to initiate the creed have little theological merit and depend more on adherence to tradition. But there will be other changes as well in the new authorized version of the Creed.

Current version:
We believe in one God,
the Father, the Almighty,
maker of heaven and earth,
of all that is seen and unseen.
We believe in one Lord, Jesus Christ,
the only Son of God,
eternally begotten of the Father,
God from God, Light from Light,
true God from true God,
begotten, not made,
one in Being with the Father.
Through him all things were made.
For us men and for our salvation
he came down from heaven:
by the power of the Holy Spirit
he was born of the Virgin Mary,
and became man.
For our sake
he was crucified under Pontius
Pilate;
he suffered, died, and was buried.
On the third day he rose again
in fulfillment of the Scriptures;
he ascended into heaven and is
seated
at the right hand of the Father.
He will come again in glory
to judge the living and the dead,
and his kingdom will have no end.
We believe in the Holy Spirit,
the Lord, the giver of life, who
proceeds
from the Father and the Son.
With the Father and the Son
he is worshiped and glorified.
He has spoken through the
Prophets.
We believe in one holy catholic
and apostolic Church.
We acknowledge one baptism
for the forgiveness of sins.
We look for the resurrection
of the dead,
and the life of the world to come.
Amen.

New version:
I believe in one God,
the Father almighty,
maker of heaven and earth,
of all things visible and invisible.
And in one Lord Jesus Christ,
the Only Begotten Son of God,
born of the Father before all ages.
God from God, Light from Light,
true God from true God,
begotten, not made,
consubstantial with the Father;
through him all things were made.
For us men and for our salvation
he came down from heaven,
and by the Holy Spirit
was incarnate of the Virgin
Mary,
and became man.
For our sake
he was crucified under Pontius
Pilate,
he suffered death and was buried,
and rose again on the third day
in accordance with the Scriptures.
He ascended into heaven and is
seated
at the right hand of the Father.
He will come again in glory
to judge the living and the dead
and his kingdom will have no end.
And in the Holy Spirit, the Lord,
the giver of life, who proceeds
from the Father and the Son,
who with the Father and the Son
is adored and glorified,
who has spoken through the
prophets.
And one, holy, catholic
and apostolic Church.
I confess one baptism
for the forgiveness of sins
and I look forward to the
resurrection of the dead
and the life of the world to come.
Amen.

The current version, “Lord, I am not worthy to receive you, but only say the word and I shall be healed,” does not reflect the Latin text’s clear reference to the scripture passage in which the Roman centurion asks Jesus to heal his daughter from afar, saying, “Domine, non sum dignus ut intres sub tectum meum” (“Lord, I am not worthy that you should enter under my roof”).

As of early May it was not yet known whether the most popular eucharistic acclamation -- “Christ has died, Christ is risen, Christ will come again” -- would be included among U.S. adaptations. It is not in any of the three Latin editions of the Roman Missal, so it would appear only if it is included among the U.S. adaptations for which final Vatican approval is still pending.

A final note: With the issuance of the new translation, the term “Roman Missal” will replace “Sacramentary” for the official book of prayers said at Mass. Before Vatican II, the Roman Missal was a single book that included all the Mass prayers and scripture readings for the entire year. Following the council mandate to expand the use of scripture in the liturgy, Pope Paul VI established a three-year cycle of scripture readings for Sundays and major feasts and a two-year cycle of readings for weekdays. With that expansion, the readings began to be published separately as lectionaries, and the book of prayers came to be called the Sacramentary. Several years ago the Vatican decided, along with issuance of the third edition of the Roman Missal, to restore the use of the term “Roman Missal” for vernacular editions of the book of prayers.

The new missal: an overview of the changes