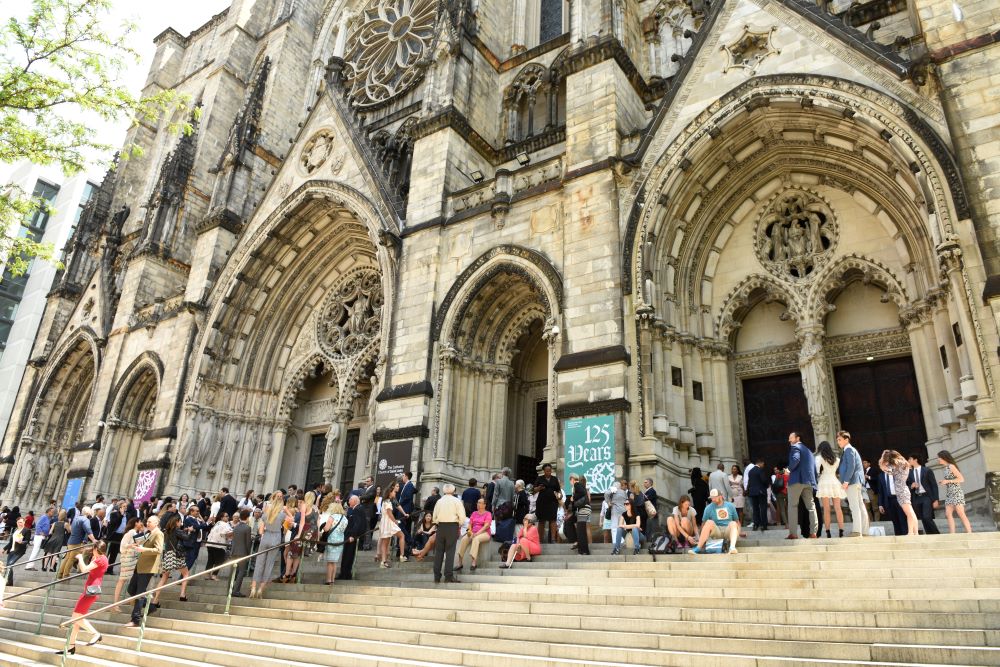 The Episcopal Cathedral of St. John the Divine in New York's Morningside Heights neighborhood will house Community at the Crossing, a yearlong program for 20- to 30-year-old U.S. Christians focused on ecumenical community, prayer and service. The program draws inspiration from the Community of St. Anselm, a similar community at Lambeth Palace, the official residence of the Archbishop of Canterbury. (Dreamstime)

Pope Francis and Archbishop of Canterbury Justin Welby, the head of the Anglican Communion, delivered speeches via video message at a launch event and service for a new ecumenical residential program for young adults in New York City on Sept. 8.

"Dear young people who will spend a year here of community life, Christian formation and discernment, prayer, service to the youth and the poor: you will be a witness to God's love and tenderness," the pope said.

The service also included a video message from Michael Curry, presiding bishop of the Episcopal Church, and a message from Ecumenical Patriarch Bartholomew, considered the spiritual leader of Eastern Orthodox Christians worldwide.

Community at the Crossing, a yearlong program for 20- to 30-year-old U.S. Christians focused on ecumenical community, prayer and service, will find a home at the Episcopal Cathedral of St. John the Divine in New York's Morningside Heights neighborhood.

The program draws inspiration from the Community of St. Anselm, a similar community at Lambeth Palace, the official residence of the Archbishop of Canterbury.

Members of Chemin Neuf, a Catholic community with ecumenical membership, arrived from France before the Sept. 8 service and will spend the next year working with the leadership at the Cathedral of St. John the Divine to prepare to welcome the first Community at the Crossing cohort in fall 2023.

Community at the Crossing leaders hope 12 young American adults from diverse Christian traditions will live at the cathedral in a residential segment of the program and another 20 or more members will continue to live and work outside the community in New York City. These "working life" members will join the residential community for prayer and events.

"Weekdays will be an intense shared community life, but on Sundays we will encourage each member to celebrate in his or her own church," Fr. Jean-Sébastien Laurent, a Catholic member of Chemin Neuf who will take a leadership role with Community at the Crossing in 2023, told NCR in an email.

Community at the Crossing will draw on a long focus on Christian unity at the Cathedral of St. John the Divine, one of the largest church buildings in the world. According to Rev. Patrick Malloy, the cathedral's acting dean, "the building itself was built as a statement about Christian unity."

Surrounding the altar, chapels represent different immigrant groups of the 19th century. "The dream of this place is that in this great city full of immigrants of all different kinds that we could provide a place where Christians, all sorts, can come together, find one another and find a way to live together in unity," Malloy said in an interview.

Malloy initially dreamed of a community like Community at the Crossing when he arrived at the Cathedral of St. John the Divine and has been working with members of Chemin Neuf to make that dream a reality for the past four years.

While he hopes the community can eventually include Christians from outside the U.S., Malloy said that the difficulties of the current visa system led organizers to begin with a focus on U.S. Christians.

Pope Francis speaks in a Sept. 8 video message for the new Community at the Crossing ecumenical residential program at the Episcopal Cathedral of St. John the Divine in New York. (NCR screenshot)

"My hope is this community will offer an opportunity to revive the desire for unity of Christians and of society in New York and even in the United States. The future of faith in our world passes through Christian unity," said the pope.

Malloy and Laurent cited grace and the Holy Spirit as moving them to work together. "Maybe theoretically it's difficult to work across denominational lines. That's not what we've found," said Malloy.

The leaders of Community at the Crossing are hopeful that the program will be a space of Christian renewal for young adults in a country where young people are increasingly exiting religious spaces.

"If church has ceased to be a place where people feel like it's the place you can go if you have questions or if you have doubts or if you're seeking out unity or peace, then we've done something terribly wrong," said Sr. Hannah Spiers, a British Anglican Chemin Neuf member, emphasizing the importance of listening to young people.

Archbishop of Canterbury Justin Welby speaks in a Sept. 8 video message for the new Community at the Crossing ecumenical residential program at the Episcopal Cathedral of St. John the Divine in New York. (NCR screenshot)

Laurent said: "When you look at the history of the church, the first disciples of Jesus were all less than 30 years old. All the companions of Ignatius of Loyola were less than 30 years old," adding that the revival of the Franciscan and Dominican orders and the charismatic renewal of the 1960s were led by young people. "Energy, creativity comes from the youth," he said.

Spiers, an alumna of the Community of St. Anselm, will take charge in developing the project and recruiting the first cohort.

Based on her experiences living in ecumenical community, Spiers said that, in the church, "Jesus brings radically different people together and then it's with the Holy Spirit that we figure out how to be family and how to do unity. But I don't believe in a cheap unity. I think it's costly."

Chemin Neuf provides time for reconciliation built into the "weekly rhythm of life." That is a time, Spiers said, "to go and speak with the other person who I might have a grievance against, who might have done me wrong or who I've done wrong or time to go and ask God for forgiveness as well."

"Love has to be concrete," said Laurent, who joined Chemin Neuf 18 years ago at age 20. "Because when you live in a community, you need to change the way you live."