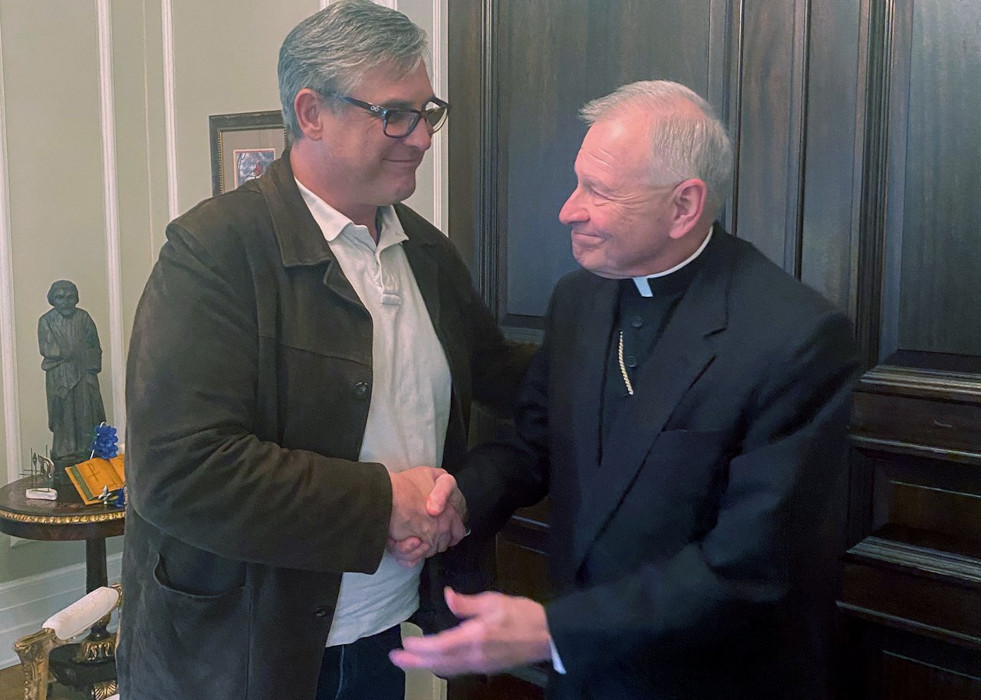 New Orleans Archbishop Gregory M. Aymond greets Kevin Bourgeois, leader of the New Orleans chapter of Survivors Network of those Abused by Priests in this undated photo. Bourgeois praised the archbishop for taking concrete actions to broaden and restructure the Archdiocese of New Orleans' response to survivors of clerical sexual abuse. A licensed clinical social worker, Bourgeois will advise a team of Catholic counselors on his perspective of dealing with abuse trauma. (CNS/Courtesy Archdiocese of New Orleans)

An ongoing series of discussions between New Orleans Archbishop Gregory M. Aymond and Kevin Bourgeois, the leader of the New Orleans chapter of Survivors Network of those Abused by Priests, or SNAP, has led to a significant broadening and restructuring of Archdiocese of New Orleans' response to abuse survivors.

The victims' assistance office will move from its current location in the archdiocesan administrative offices to the offices of the Catholic Counseling Service.

In addition, Bourgeois, who is a licensed clinical social worker, will serve as a volunteer who will offer training to the counseling team when there are disclosures of sexual abuse trauma.

The archbishop, on the recommendation of Bourgeois and other victims' advocates, also will appoint a sexual abuse survivor to the Independent Review Board, a body primarily composed of lay professionals who review allegations of abuse to determine their credibility and make such recommendations to the archbishop.

The new structure for the archdiocesan response to clerical sexual abuse was the fruit of two months of dialogue among the archbishop, Bourgeois and other archdiocesan officials.

"I realized as I was talking to Kevin with some others that it's been exactly two months [since the first discussions began]," Aymond said. "So, I have no doubt that what we're doing at this point is truly the work of the Lord. God does not want us to be divided. He wants us to be united, and reconciliation is what Jesus calls us to.

Bourgeois, who attended St. John Prep 40 years ago when then-Fr. Aymond was the rector of the high school for boys and was himself considering a vocation to the priesthood, said he has been stunned by the speed of the creation of the new structure.

"The Catholic Church moves in glacial terms; it works in centuries," Bourgeois said. "I'm the kind of person who wants what I want yesterday. I asked the archbishop what he thought of this whirlwind, and he said, 'Kevin, we're on the same page.'"

The archbishop said the archdiocese's goal in helping sexual abuse survivors "has always been to walk with victims toward healing."

"We hope to provide a real path forward and an opportunity to rebuild trust in the church," he said, "and rebuild relationships that may have been broken as a result of the pain of their abuse."

The archbishop first met with Bourgeois Dec. 15, initiating "some very open and frank discussions about the strengths and weaknesses of what we're doing."

Those discussions, the archbishop said, "led us into a reexamination of the process of when a person comes to report abuse and how we can effectively walk with them, work with them, lead them to some kind of healing."

"Joey Pistorius is well qualified. I've been wanting for a long time to connect the victims' assistance coordinator with our counseling center because it's quite a good counseling center," he said. "Kevin is a volunteer leader for SNAP, and he will help [the counselors] understand where the victims are coming from."

Bourgeois told the Clarion Herald, New Orleans' archdiocesan newspaper, that he views his role with the counseling team as "reinforcing what these counselors already know."

He said Pistorius and his team will be "fielding calls from potential survivors" and he envisions that he will be "offering a didactic piece as a survivor."

The new victims' assistance response team will work together to address the individual needs of each survivor.

In a separate response effort and as a result of ongoing conversations between Aymond, archdiocesan leaders and Bourgeois, the archbishop renewed his call to meet directly with survivors of abuse and their families.

All victims and survivors of abuse are encouraged to meet with the archbishop for pastoral care once any pending legal claims are settled.

"We have not often met with the families [of survivors] but we wish to do that more," Aymond said.

The archbishop added that while this plan's focus is specific to survivors of clergy abuse, counseling and pastoral care are available to all survivors of sexual abuse.

Bourgeois admitted that his willingness to work with Aymond has drawn criticism from some within the SNAP community.

"I'm getting a lot of flak from a vocal minority," Bourgeois said. "I'm not intimidated by that. All of this is the work of God," he said, adding that the archbishop has made him believe this even more.

"He and I have been able to remove the title of 'leader of New Orleans SNAP chapter' and 'Archbishop of New Orleans.' I was able to look at him not as the archbishop but as a man. I genuinely like Archbishop Aymond as a man and as an individual."

What does this mean to Bourgeois?

"It means open, frank, honest and courageous discussions that the archbishop and I started on Dec. 15 have resulted in him listening to me not only as a man but also as an abuse survivor," Bourgeois said. "And then he has taken action.

"There's nothing sinister or salacious about that, and there isn't anything that should be questioned. He should be applauded. This is him."

Finney is executive editor/general manager of the Clarion Herald, newspaper of the Archdiocese of New Orleans.