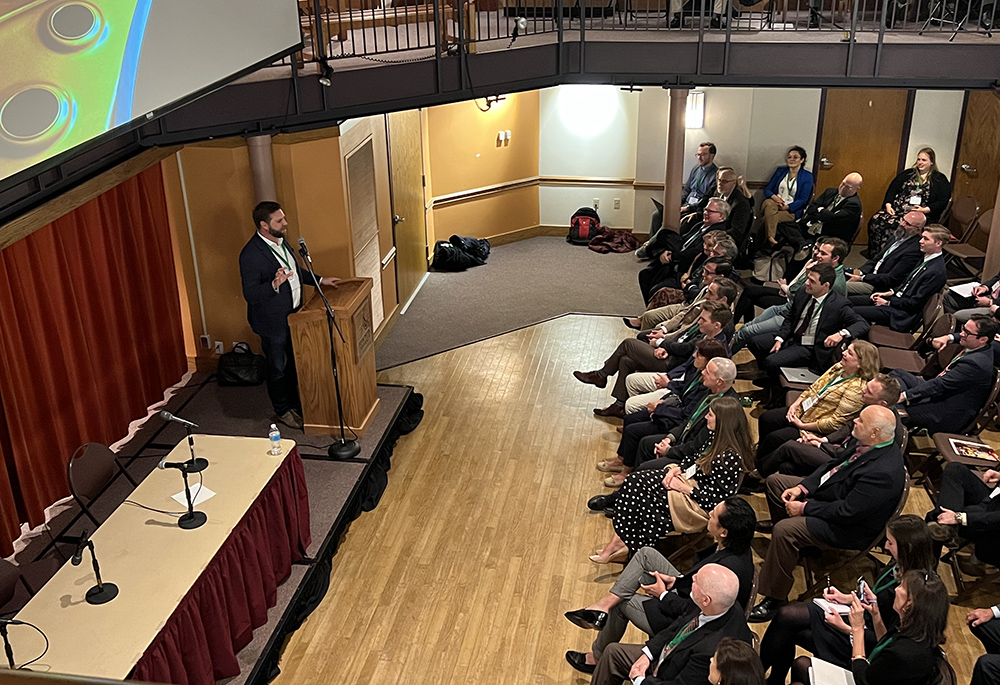 Republican Senate Candidate J.D. Vance, author of the best-selling memoir "Hillbilly Elegy," speaks about life on the campaign trail during the Oct. 7-8 conference, "Restoring A Nation: The Common Good in the American Tradition," at Franciscan University of Steubenville in Steubenville, Ohio. (NCR photo/Brian Fraga)

Several speakers articulated a vision of the United States where domestic manufacturing is not only revived and globalization reined in, but where traditional Christian morality is restored to a central place in society and mainstream culture, and where leaders in government are comfortable using political power to enforce those religious values and punish "woke" progressives.

"Overt biblically grounded lawmaking, a concomitant biblically informed constitutional jurisprudence, and an approach to God in the public square that we might think of as an ecumenical integralism, represents our only hope for recovery at this late hour in our ailing, decadent republic," Josh Hammer, a Newsweek opinion editor, said during one panel discussion.

The conference, entitled "Restoring a Nation: The Common Good in the American Tradition" and held Oct 7-8, featured a who's who lineup of influential speakers in the national conservative movement, where grassroots momentum has been building on the right since former President Donald Trump in 2016 shook up the Republican establishment with his nationalistic rhetoric, hardline partisanship and bare-knuckled style of political combat against his liberal critics.

Disaffected by secularization, social media censorship, the legal recognition of same-sex marriage and the widening societal acceptance of LGBTQ rights, the conference speakers described an America in crisis, where tyrannical forces in "Big Tech," media, academia, government and industry are cracking down on and isolating social conservatives and religious traditionalists in the United States.

"Look around you. … Does the world look free?" said Sohrab Ahmari, a former New York Post op-ed editor and current fellow at Franciscan University's Veritas Center for Ethics in Public Life, who helped organize the conference. Ahmari spoke about "privatized coercion" in the market economy that he said subjugates American consumers and workers.

"If China treated workers the way Amazon does, American elites would be outraged," Ahmari said.

Rachel Bovard, senior director of policy at the Conservative Partnership Institute think tank, attacked the "woke industrial complex," which she described as the "axis of Big Tech, Chinese and corporate totalitarianism." She characterized the Pentagon — which in 2021 announced new guidelines to allow transgender people to enlist and serve openly — as "woke."

To prevent that dystopian future, several conference speakers called for a restoration of Christian values, where abortion and gender reassignment surgeries are outlawed, traditional marriage and large families are supported by generous state subsidies and paid parental leave, where prayer is readmitted to public schools and commerce is banned on Sundays.

"Another world is possible, namely, Hungary," said Gladden Pappin, a University of Dallas political scientist who has lauded the regime of Hungarian Prime Minister Viktor Orban, a populist authoritarian who has been criticized in western Europe for turning Hungary into an "illiberal democracy" where freedoms of the press and judiciary are curtailed.

"Post-liberal" speakers such as Chad Pecknold,* a theology professor at the Catholic University of America, said establishment Republicans and mainstream conservatives who espouse neoliberal principles such as limited government, deregulation and free market capitalism are incapable of countering "left liberal materialism."

"You can't respond to left liberalism with liberalism," said Pecknold, who like other speakers criticized the idea of a "values neutral" or secular public square where the state does not endorse a religious framework or societal outlook. Pecknold spoke of the necessity of a "public orientation to God," which he said could be reflected "in concrete ways" with certain national holidays, civic liturgies and "sabbath" laws.

"A perfect society has elevating power to unite us to our final end, which is God," Pecknold said.

Though the U.S. Constitution's First Amendment prohibits the establishment of an official state religion, several of the conference's Catholic speakers articulated their dissatisfaction with a religiously neutral American civil society.

"The idea that a civil society should be neutral between authentic sacraments and their parodies, between the life of grace and the life of vain self-reliance, is incoherent, amoral and ultimately self-defeating," said Scott Hahn, a Franciscan University theology and scripture professor who has become well known in Catholic circles for his appearances on EWTN, the conservative Catholic media conglomerate.

Hahn bemoaned the United States' current political and social order that he said does not allow the "sacramental nature of society to flourish," which he described as a "denial of reality" since he said human beings "are not just social animals, but ecclesial animals too."

Mary Imparato, chairwoman of political science at Belmont Abbey College, recalled a trip to Washington as a young woman where she said she found herself disagreeing with other Catholic students who were not comfortable with the idea of contraception being banned by law or an image of the Virgin Mary one day replacing the Statue of Freedom atop the U.S. Capitol building.

Harvard Law Professor Adrian Vermeule, who has advocated for the kind of "common-good constitutionalism" that would empower the state to legislate public morality, also spoke at the conference. He focused his remarks on defending the authority of the federal bureaucracy, also called the "administrative state," to uphold the common good.

"There is no alternative to the administrative state. There is no dismantling of it. To dismantle it would be to dismantle the American constitutional order," said Vermeule, who also defended the prerogatives of federal agencies in a panel entitled, "The Wisdom of the New Deal Tradition."

"The New Deal was a spectacular success," Vermeule said. Patrick J. Smith, a contributor to The Josias, an online journal of Catholic integralist thought, said during the panel that reexamining the New Deal in a favorable light had been "an unbroken thread" in the conference.

The national conservative-integralist embrace of President Franklin D. Roosevelt's expansive New Deal project marks a significant point of departure from the mainstream conservatism that since President Ronald Reagan in the 1980s has espoused small government, laissez-faire economics and free trade. Those policies, several speakers at the Franciscan University conference said, have resulted in deindustrialization, hollowed-out cities in the Rust Belt, frayed social bonds, and the kind of hopelessness and despair in those communities that have exacerbated the national opioid crisis.

"This is our world. This is what we see every day, and this is what we accept as normal, of what progress looks like. This might even be what we call the blessings of liberty, the way it is," said Patrick Deneen, a University of Notre Dame political science professor and leading post-liberal academic.

Deneen showed the audience photographs of German and American cities, taken before and after World War II. He said the United States adopted the Marshall Plan to rebuild German cities to their former glory but allowed places like Detroit, Steubenville and South Bend, Indiana, to fall victim to ruthless global market forces.

"I want to suggest that we actually lost the war," Deneen said. "What we're seeing is evidence of a kind of bombardment, of a literal destruction of our nation, that has been in a sense a war fought against us, or certainly the people in these places."

Echoing progressive critiques of unfettered capitalism, Rusty Reno — the editor of the conservative First Things journal — told the Franciscan audience that capitalism has "imperial ambitions." He also said that capitalism makes "alluring promises of prosperity and freedom" but instead delivers "many forms of bondage and many pathologies."

"This is the time to think heretical thoughts, and I think that's much needed in 2022," said Reno, who called on the American political right to rethink its longstanding belief that markets are self-correcting and self-limiting, a position he dismissed as utopian.

On matters of political and economic policy, Hammer, the Newsweek opinion editor, said the New Right "is more nationalistic, more communitarian and invested in cultivating and advancing the material conditions" of "real people who lead real lives." He espoused protective tariffs and "prudential antitrust enforcement to prevent corporate tyranny."

But while centering economic policy proposals on the nuclear family, Hammer suggested that culture war issues are at "the very heart and soul of the New Right." He said the movement supports proposals such as extending the U.S. Constitution's 14th Amendment's equal protection clause to unborn children, banning gender reassignment surgery for everyone — not just minors — and overturning the U.S. Supreme Court's precedents to return the Bible and prayer to public schools.

"The New Right recognizes the only viable force capable of withstanding and turning back the woke onslaught is religion, which in America means Christianity," said Hammer, who suggested that using the state to subdue progressives can be "both popular and successful."

A politician who has aligned himself with the national conservatism on display at Franciscan University is J.D. Vance, a first-time Republican candidate running for the open U.S. Senate seat in Ohio. Vance, author of the bestselling memoir Hillbilly Elegy, was the conference's final speaker. He described life on the campaign trail, the importance of raising money as a candidate, and a "ruling class" that he said is corrupt and despises working-class people.

"It's not easy to be on the vanguard of a new Republican Party when so many people are getting rich off doing things the old way," Vance said. The audience of roughly 200 people, nearly all of them white, gave him a standing ovation.

*This story has been updated to correct Pecknold's first name.

A version of this story appeared in the Oct 28-Nov 10, 2022 print issue under the headline: 'New Right' academics argue for biblical lawmaking.