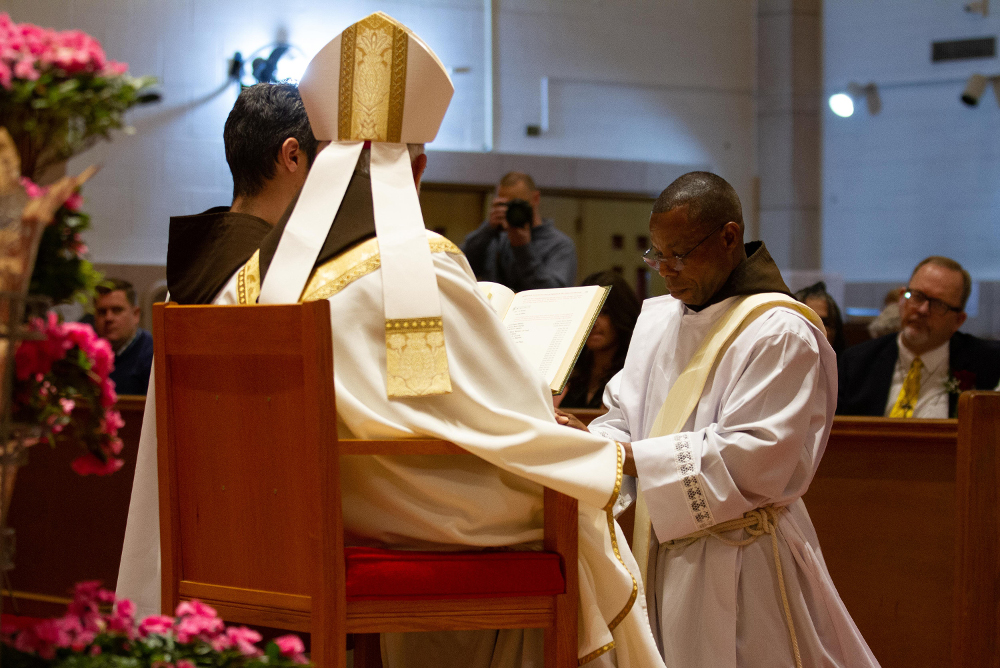 Fr. Anthony Kote-Witah kneels before Bishop Paul Schmitz of Bluefields, Nicaragua, during his ordination to the priesthood at St. Clare of Montefalco Church in Chicago April 27. (CNS/courtesy of the Capuchin Franciscan Province of St. Joseph)

When Capuchin Franciscan Fr. Anthony Kote-Witah first walked into the Solanus Casey Center in Detroit, he knew it was where God was calling him.

In 2013, the Nigerian-born human rights activist was discerning a vocation with the Capuchins when he visited the order's St. Bonaventure Monastery in Detroit, and upon looking at the statues of human rights champions St. Oscar Romero, St. Teresa of Kolkata and the Rev. Martin Luther King Jr., he felt a sense he wants others to feel.

Kote-Witah has plenty of experience "smelling like the sheep." Born into the Ogoni tribe in southern Nigeria, Kote-Witah got a firsthand look at suffering and fighting for justice.

The Ogoni homeland is predominantly Christian; Nigeria's population of almost 191 million is roughly split between Christians and Muslims.

Kote-Witah joined the Movement for the Survival of the Ogoni People; the organization in 1993 wrote the Ogoni Bill of Rights to demand improvements to the area's infrastructure and rights for the Ogoni.

"There was an operation to shoot on sight, no courts, no law really; the military would come in during the night and destroy villages and towns," Kote-Witah said. "Most of our homes were patch houses, so they poured gasoline — from oil from our own soil — and set the place ablaze, roasting people on the inside. After that, we made our protests more seriously, others trying to escape. But without a passport, it's hard to leave your country. Fortunately, the United Nations recognized our plight and we had a place to go in Benin, a nearby country."

Conditions in the refugee camp in Benin were dismal. Three to four families apiece shared small tents, and a bowl of rice was a monthly food ration. Disease was common. But in the camp, Kote-Witah said the Christian Ogoni still had hope.

Kote-Witah spent three years in the refugee camp in Benin. His uncle back home in Nigeria was a priest, and that is when he first thought about the priesthood.

He wound up in Lincoln, Nebraska, through Catholic Social Services, working in a few jobs while finishing high school. He enrolled at the University of Nebraska and later at Creighton University, working at a parish in downtown Omaha.

Kote-Witah joined the Capuchins in 2013 and made his perpetual vows in 2018. After joining the order, he had spent most of his ministry in Detroit, serving in the soup kitchen, leading substance-abuse support groups and guiding spiritual retreats at the center.

He was ordained to the priesthood April 27 in Chicago by Bishop Paul Schmitz of Bluefields, Nicaragua, himself a Capuchin.

Kote-Witah ministers to people who have gone through hard times — in a city that has seen its share of better days. But as Kote-Witah found hope through desolation, he tries to find that same light of Christ's love in the lives of others.

"For me, talking about all that has happened is a blessing, because they are tools, a source for sharing," he continued. "In the 12-step program, and with the soup kitchen, I come across people who are depressed, many who want to commit suicide. But when they hear my story, seeing I survived, they feel they, too, can survive. And I stay with them, walking with them like a brother."

"When I share my story, I'm saying if I can stand here today, you can stand here tomorrow," Kote-Witah said. "I share what I got, in the core of my heart, so people can come closer to God. I tell people, the situations they find themselves are part of a process, a way of growing closer to God. Like the lives of Solanus Casey or Padre Pio, God gives us our lives, our love, to share with other people."