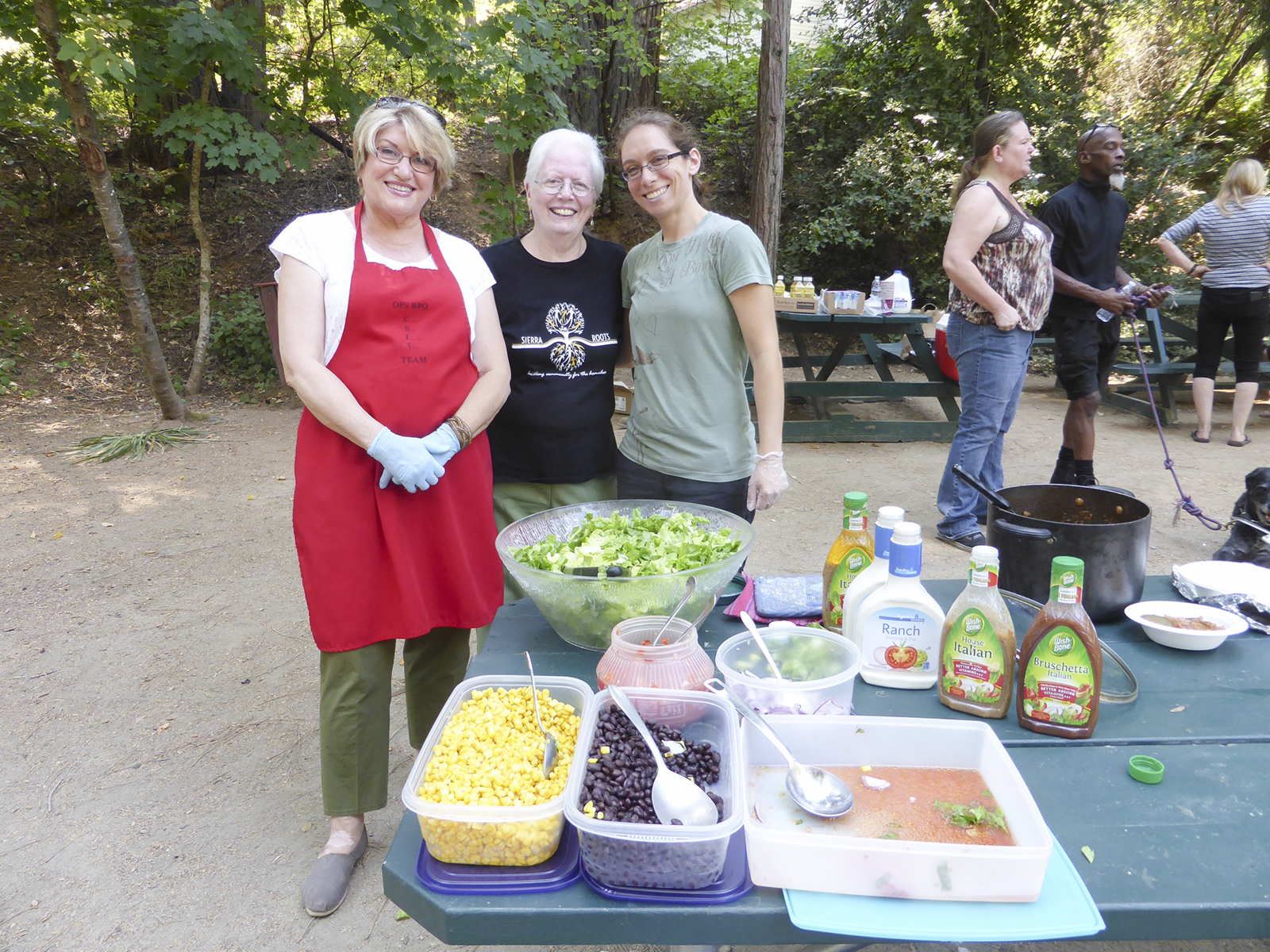 Janice and Jim O'Brien moved post retirement in 1999 to Nevada City, California, to enjoy their new phase in life. It was quiet and peaceful, as they expected.

Two years later, things around them changed. The O'Brien's son and daughter-in-law were dealing with serious addiction issues. The couple's children were taken away from them, so the O'Brien's took in their grandchildren.

"They were 20 months old, 3 years old and 5 years old at the time. My son was an alcoholic and my daughter-in-law was addicted to pain pills. She later turned to meth," recalled Janice O'Brien. She thought the phase would last a year or so, until her son and his wife got help for their addiction. Instead, the two followed their children to Nevada City from Tacoma, Washington. For a while they lived in their van and after that, they were homeless.

Nevada County is known for its Gold Rush history. Nestled in the foothills of the Sierra Nevada Mountains, the county's scenic beauty has helped it earn millions of dollars in tourism. But lack of affordable, low-income housing in the county has given rise to homelessness. On Jan. 24, the Homeless Resource Council of the Sierras and Point-in-Time (a one-night estimated count of sheltered and unsheltered homeless population) reported a total of 410 homeless people in the county — from Grass Valley to Truckee. The total population estimate of Nevada county as on July 1, 2018 is 99,696.

Seeing her son struggle with homelessness, O'Brien began looking around for shelters.

"We couldn't take in my son and daughter-in-law because we had the children," she said. She realized that many homeless people wouldn't go to the local community shelter. "They either didn't want to go, had animals or were addicted — they couldn't meet the barriers," she explained.

Her son and his wife died homeless. "My daughter-in-law went missing in 2005 and her remains were found in 2009. She was murdered in a homeless camp and my son died of alcohol poisoning and heart congestion in 2013," O'Brien said. The devastating events gave O'Brien the impetus to change the way the chronically homeless were treated in Nevada City, and in 2011, Sierra Roots was born.

A Catholic nun for 13 years with the Sisters of St. Agnes in Fond du Lac, Wisconsin, O'Brien was always drawn toward helping the poor.

"At age 17 I became the bride of Christ. The inspiration of so many strong and loving women like Mother Teresa, Mother Catherine McAuley and St. Jane Frances de Chantal have always drawn me to do what I can to help children and the poor," said O'Brien. Soon she found her calling outside the walls of the convent. "In 1967, I was called out of the convent to be with street people during the Civil Rights riots. My Catholic faith and education and my love for Jesus have been my constant guide." 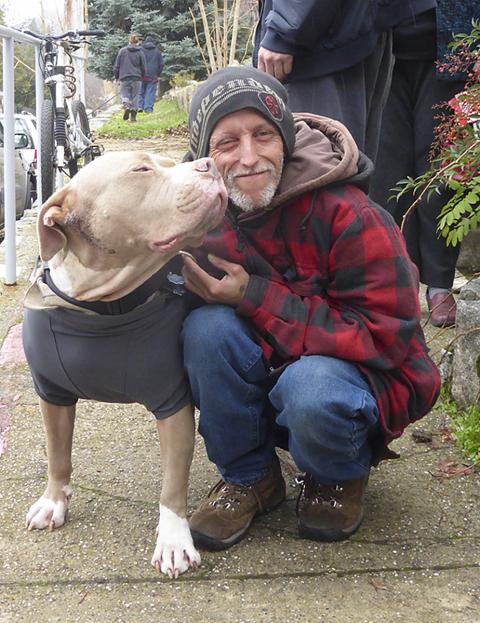 Tank the dog and his owner, Billy, wait outside before the shelter opens. (Provided photo)

The first big service of the organization was in 2012, when it began providing a full hot meal to the homeless once a week. They then moved to operating an inclement weather shelter during the winter. "We negotiated with Nevada City to open a Cold Weather Shelter during the winter of 2013," recalled O'Brien.  Since then, every winter the organization opens shelters for the homeless.

Today, Sierra Roots works closely with the homeless in finding jobs and helping those who suffer from mental health issues and addiction.

"We have a philosophy of meeting them where they are. We do not push them to do anything or to seek help. We try being friends with them and be available when they need us," said O'Brien. Sierra Roots works with organizations like Hospitality House, a community shelter for the homeless in Nevada County and Friendship Club that educates and empowers sixth to 12th grade girls, who are at-risk of dropping out of school and engaging in unhealthy behavior. They also work with groups that support disabled homeless people.

"We are a collaborative organization. We recently had a terrible winter with sub-zero temperatures, and with help from local authorities we were able to provide temporary shelters, especially to the sick and diseased," said Paul Cogley, executive director of Sierra Roots since January.

The organization's weekly meal program is quite well-known in Nevada City. They serve two lunches a week at a local park during the summer, and at the First Baptist Church in Nevada City during the winter months. The program is led by Diane Weichel, volunteer coordinator of Thursday lunches. Weichel ensures the meal consists of a meat dish, a vegetarian option, salad and a dessert.

"We also try to source dry food by visiting the food banks. By having snacks like cookies and jerkies, the homeless have something to eat on days they have no food," said Weichel.

She also shops for clothes and distributes feminine hygiene products among the women. "We give them a pair of clean socks every week. Imagine having no shoes and living in just a pair of socks! During the winter, we source tents and sleeping bags," she said.

Many local residents are inspired by the work of Sierra Roots and register to volunteer, bringing homecooked dishes to the lunches and cleaning up after.

"Most of our volunteers are older people, mainly retirees and housewives. Young people help out as part of their school project, or those required to do community service," said Weichel.

Sierra Roots also trains advocates. Each advocate is assigned to a homeless person and assists them in navigating hospital visits, filling out forms, visits to lawyers and more.

Local authorities too have been supportive of Sierra Roots, especially law enforcement.

"There are two police chiefs here — from Nevada County and Green Valley. Both are very supportive of the work we do," O'Brien said. "The chiefs are concerned about treating the homeless humanely."

The "rogue cops" are who the homeless fear most. "There are others [police] who are not so compassionate," O'Brien said. "They often go around and sweep a camp, throw away their belongings. It depends on the officer. But all-in-all, law enforcement leaves them alone unless they are being disruptive."

Changes continue to happen at Sierra Roots, which is now working to provide a more permanent solution by building a community village. The village will contain 30 tiny homes and an eating area. The residents will grow vegetables, flowers and there are plans to start a bicycle repair shop.

The idea is to build a self-sustaining community that is safe and gives the homeless a sense of dignity. O'Brien believes this community village will be a source of love and mutual support.

"One of the town drunks was my son's friend. He was known to be aggressive and used to follow pretty girls around," she said. "He would play the guitar and stand on parking spots, refusing to move unless paid $2. He became quite a nuisance and then we started working with him. He's been through rehab and now he's sober for two whole years! He lives outside town in a group home and credits us for the turnaround."

Sierra Roots has found a piece of land they wish to purchase and are working toward raising $800,000 with the help of donors. They're also working with the U.S. Department of Agriculture to secure a low interest, long term loan. "By providing a safe haven for the homeless, we hope to help them live with dignity," O'Brien said.

Sierra Roots credits its strong spiritual foundation for their commitment to community service.

"What we are seeing here (with homelessness) is a spiritual crisis. And we need spiritual strength to take action," said Cogley. O'Brien and Cogley are Catholic but the group is non-sectarian and includes members such as a Buddhist monk and a Native American, who bring different aspects of spiritual principles and practices that helps the group cope with the challenging nature of the mission.

"When it comes to helping people, we need to remember — 'I'm the other, we are the other.' Setting aside bias and assumptions, we need to be non-judgmental of people, languages and their environment," said Jeanne Dickenson, secretary of Sierra Roots.

[Sarah Salvadore is a New York-based data investigative journalist, who writes on gender and immigration. She is a graduate of Seton Hall University where she was a scholar of religion and conflict, specializing in Judaism, Christianity and Islam, and an alumna of Columbia School of Journalism, New York.]

This story appears in the The Field Hospital feature series. View the full series.
A version of this story appeared in the Sept 6-19, 2019 print issue under the headline: Nonprofit offers an easier place to call home.