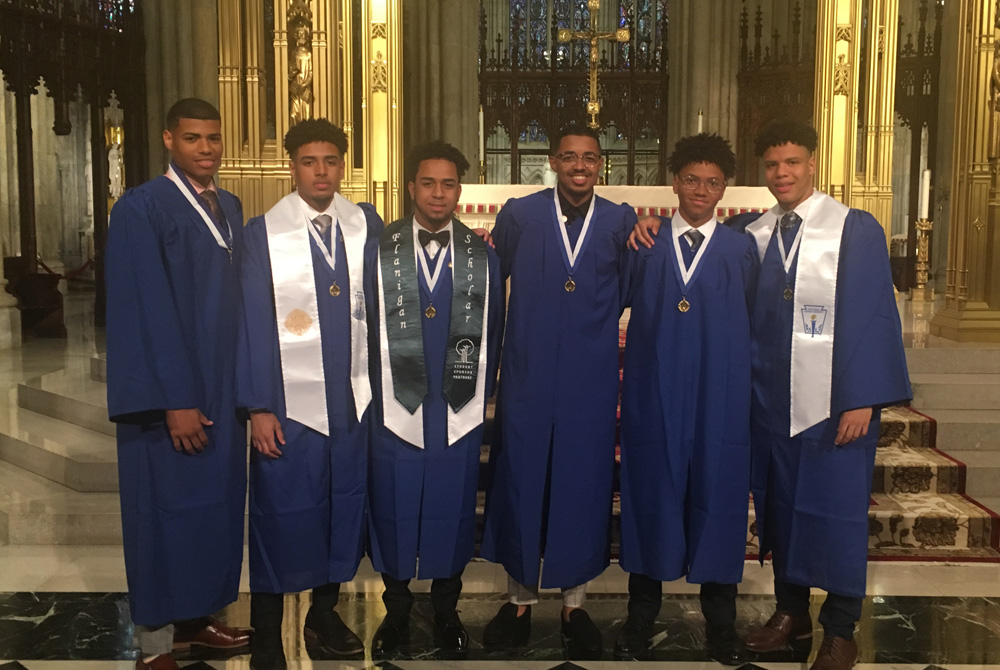 Peter Flanigan was the first man Debra De Jesus-Vizzi could ever trust.

When they met in 1976, De Jesus-Vizzi was a teenager living in a group home run by the Sisters of Good Shepherd and Flanigan, a friend of the nuns, was a wealthy investment banker looking to give back. That's why he offered to send De Jesus-Vizzi to Cathedral High School in New York City and also serve as her mentor.

More than 40 years later, the positive ripple effects of that offer are still being felt today by thousands of New Yorkers around the city.

Now 56, De Jesus-Vizzi is the executive director of Student Sponsor Partners, a nonprofit Flanigan founded in 1986, built largely in the image of that original relationship with De Jesus-Vizzi. Those close to Student Sponsor Partners credit the organization with helping nurture thousands of other productive citizens through a combination of mentorship and full tuition to quality private, mostly Catholic, high schools.

Those close to Student Sponsor Partners also say its high success rate points not only to the power of effective mentorship, but also to the continued relevancy of Catholic education in an era where more and more Catholic schools are being closed down. 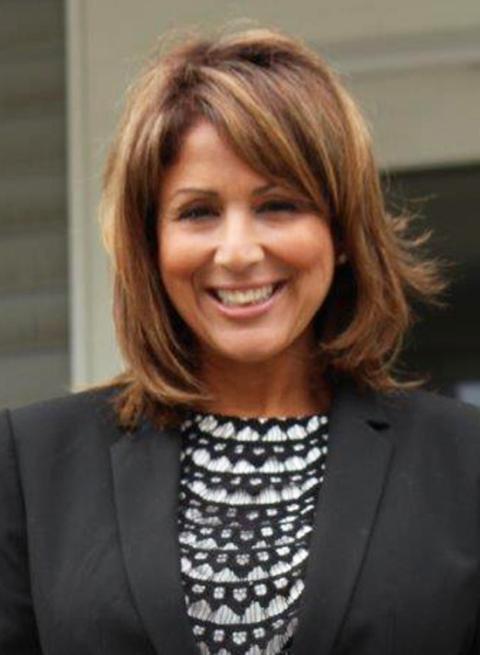 According to De Jesus-Vizzi, when Flanigan founded Student Sponsor Partners, he realized that academically high achieving, low-income students would often be eligible for scholarships, and that students on the lower end of the spectrum would be channeled to special education. This left out a big chunk of kids.

"So, the kid in the middle of the bell curve, who makes up the majority, never has the opportunity to go to a private school," De Jesus-Vizzi said of Flanigan's thought process.

Student Sponsor Partners is uniquely geared towards those low-income students in the middle, deemed "average" by their performance on middle school test scores.

Each year the program receives somewhere between 1,500 and 2,500 applications from middle schoolers for 300 slots. De Jesus-Vizzi said that students who are selected, all of whom live below the poverty line, go through a personal process designed to set them up for success.

First, a student is individually matched with both a financial sponsor and a mentor, both of whom agree to support their student for the next four years of high school. The sponsor pays the student's full tuition and the mentor meets one-on-one with the student at least four times per year.

Board member Megan Flanigan, founder Peter Flanigan's daughter, called mentorship the nonprofit's "secret sauce," giving students someone in their corner to constantly encourage and remind them of what's possible.

This was the case for Student Sponsor Partners alumnus Dr. Jorge Aguilar. Before he became a doctor in the Bronx, Aguilar, 36, said that it was his mentor, Christopher Namtze, who first introduced him to science. Namtze would often buy Aguilar science magazines like Scientific American and Discovery, and bring Aguilar to different museums around the city. 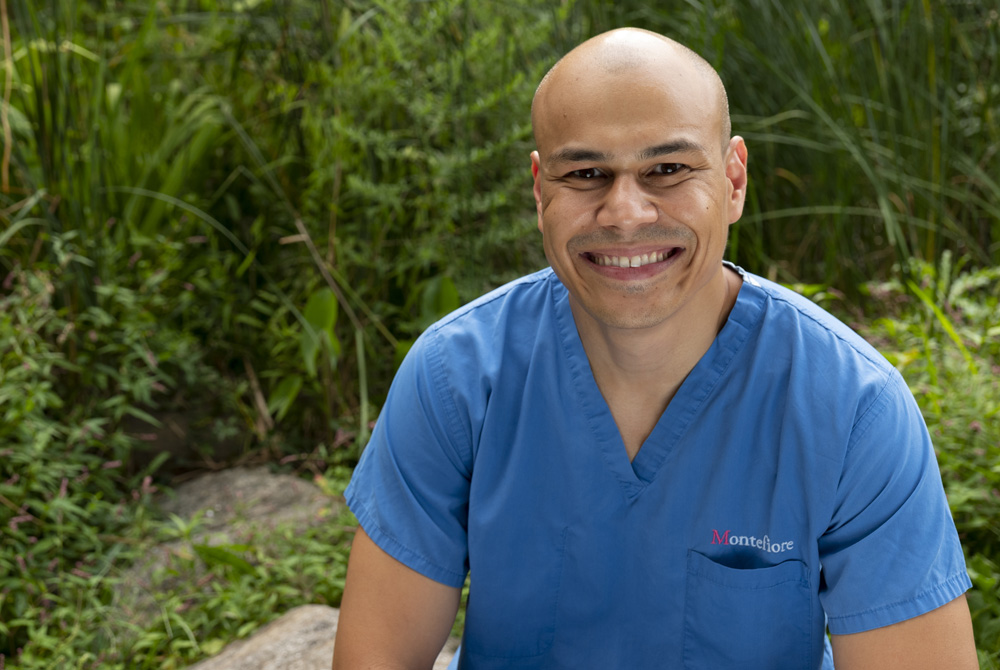 "He just fanned those flames for me, and that's how I became so interested in pursuing a science degree in college," Aguilar said.

Kevin Conway, vice chairman of the board of directors, said the positive community impact of mentorship goes both ways. Conway told NCR that one benefit Student Sponsor Partners' mentorship program has on New York City is in exposing the mentors, whom Conway described generally as "relatively fortunate," to the realities of poverty.

"It opens their eyes, and in some cases, it opens the eyes of their families," said Conway, whose own children are all sponsors and mentors.

This past year, Student Sponsor Partners launched a major recruitment effort with the NYPD that led to more than 200 police officers volunteering to serve as mentors. De Jesus-Vizzi said that her organization hopes the relationships its students form with the officers can help change the "paradigm of the conversation" between poor communities of color and the city's police force.

"The New York City Police Department-SSP relationship is pretty special. In addition, we're introducing the NYPD's human side, a humane side, often in neighborhoods where a cop is not necessarily a positive thing and doesn't connote good things when people talk about the police," Conway said.

Another topical conversation Student Sponsor Partners is shedding a light on in New York is that around the city's Catholic schools.

Of the 23 high schools the nonprofit sends its students to, all but one are Catholic.

"Because most of our schools are Catholic, we have a plethora of talent, of school choice, of incredible opportunities that these schools offer these kids that it's just been a win-win all around," De Jesus-Vizzi said. 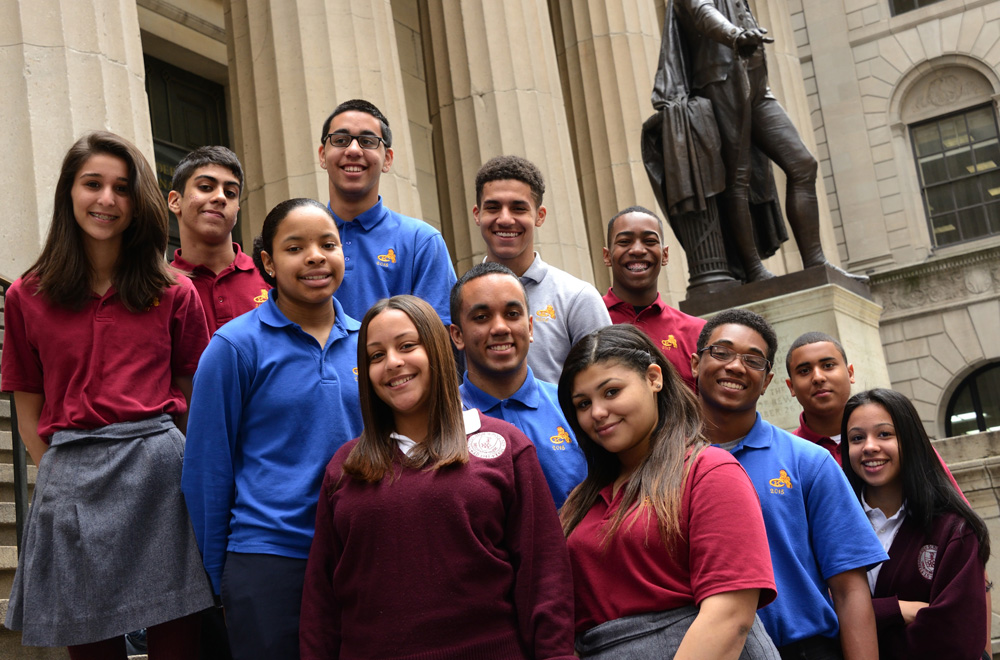 One important advantage of Student Sponsor Partners' relationship with Catholic schools, according to De Jesus-Vizzi, is that many of them are already located in the neighborhoods where the nonprofit's students are coming from. The locality of the Catholic schools makes the transition out of public schools much easier for many students.

Despite a long history of educating some of the city's poorest residents, in recent years the New York Archdiocese's Catholic school system has been making headlines for other, less positive, reasons. In February, the archdiocese announced the closure of seven schools at the end of this past academic year, five of which were in New York City. Two years earlier, in 2017, the archdiocese closed five more of its schools in the city.

Aguilar said his former school, St. Agnes Boys High School run by the Marist Brothers, was sadly shut down in 2013.

Before Student Sponsor Partners came into his life, Aguilar was what you might call a typical "at-risk student" — living in poverty in the South Bronx, surrounded by drugs and violence, and being raised by a single, immigrant parent.

Aguilar said he was never motivated to do well academically growing up "because what's the point?" His primary concern in middle school was just surviving each day.

That changed when he got to St. Agnes. Aguilar said the safety he felt and the personal investment in him that teachers displayed there provided exactly the type of environment he needed to flourish. He became a straight A student; was eventually awarded a full scholarship to Swarthmore College, where he graduated president of his class in 2005; and in 2017 he received his M.D.-Ph.D. from the Albert Einstein College of Medicine in the Bronx, his home borough.

When asked what he thinks it was specifically about a Catholic education that was so valuable to him and other students from similar backgrounds, Aguilar cited "the sensation that we have more to contribute to this world than we think, that we are more valuable than we are made to believe coming from neighborhoods neglected by society."

Student Sponsor Partners is full of success stories. In its 33-year history, the nonprofit has provided nearly 7,000 low-income students with a private high school education and in 2017, 97% of the program's graduating class were accepted to college, according to the organization's website. Notable alumni include the likes of NBA All-Star Kemba Walker, author Gretchen Rubin, and New York City Council Member Alicka Ampry-Samuel.

While De Jesus-Vizzi said she is aware of negative headlines surrounding the Catholic church these days, she said that can't discount the good work Catholic schools continue to do and the mission-oriented values they instill in their students.

"The very things we know about Catholic education we know are so wonderful are still ever present in these schools," she said.

Aguilar did not grow up religious. However, he felt that the impact the Marist Brothers at St. Agnes had on him as a teenager was so profound that, at one point, he considered becoming a priest. Instead he has found a different way to serve, by going into the field of child psychiatry, where he hopes to work in an inner-city.

"One of the lessons I learned in my Catholic education is to help those who can't really speak for themselves or defend themselves," he said, "so I chose a field where the patients can't really do that."

A version of this story appeared in the Feb 21-March 5, 2020 print issue under the headline: Nonprofit opens educational doors for low-income students.