by Barbara Fraser
This article appears in the Immigration and the Church feature series. View the full series. 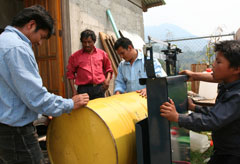 ACTEAL, MEXICO -- Thirteen years have passed since the massacre of 45 men, women and children in a Catholic chapel here in December 1997. Their relatives and neighbors scattered, afraid to return home or go to their fields to harvest their coffee crop.

Determination overcame fear, however, and a few years later the farmers founded Maya Vinic -- which means “Mayan man” -- a coffee and honey cooperative that rose from the ashes of tragedy.

On a sunny morning in May, the buzzing of bees rose and fell around the cooperative’s warehouse as farmers arrived in pickup trucks filled with plastic jugs of honey. Cooperative officers weighed the honey, checked the quality and poured it into bright yellow barrels the size of oil drums.

This year, Maya Vinic expects to ship about 14 tons of certified organic, fair-trade honey to Belgium and about 116 tons of organic coffee to buyers in the United States and Switzerland.

Swimming against the tide of small farmers who are abandoning their crops in search of a better income in cities or across the border in the United States, the farmers in Acteal are struggling to make a decent living off the land, with assistance from Catholic Relief Services, the U.S. bishops’ aid and development agency.

In various parts of Mexico and Central America, local development projects are trying to boost farmers’ income. But experts say that focusing on rural development in the farmers’ home countries is not enough to stem the tide of northward migration.

“You can’t look at the problem as if the causes were only in the country of origin,” said Raúl Delgado Wise, director of the Development Studies Academic Unit at the Autonomous University of Zacatecas in Mexico. “Migration is a transnational phenomenon, and you have to look at forms and processes of economic integration to understand the situation.”

Because assembly plants receive parts from abroad and ship the finished product overseas, their impact on the local economy is minimal because no market chain of suppliers and related industries grows up around them, he said.

While many unskilled workers and farmers have migrated to work in the plants or across the border in the United States, highly educated Mexicans have also left the country.

“About half of Mexico’s scientific community is in the United States,” Delgado Wise said.

Economists point out that migrants working in the United States send money home to their families, pumping funds into local economies. But others who have studied the flow of those funds, called remittances, question their impact.

Migrants from Latin America and the Caribbean sent $23.8 billion home in 2001, a figure that tripled by 2008, before dropping to $58.8 billion in 2009, according to the Inter-American Development Bank.

The bank’s studies found that families use the funds for a variety of needs, from education and health care to housing and starting small businesses. Various development agencies, from the Inter-American Development Bank to local groups, have launched projects to help families start businesses to spur local economic growth, but Delgado Wise said many of those projects are subsidized and cannot continue without the agencies’ support.

“You can’t consider remittances a source of productive investment, because a remittance is only a small percentage of a very low U.S. wage,” he said. “Very few of the people who receive remittances manage to cross the threshold out of poverty. And if they get out of extreme poverty, they barely make it above the line and could slide back at any time. They don’t really achieve social mobility.”

Ultimately, the ability to invest remittances well depends on the family’s ability to organize its finances -- a skill the family members left behind might not have, according to Society of Helpers Sr. Gloria Murúa of the Human Mobility Ministry in Comitán, in Chiapas, Mexico.

Some families use the funds to build larger houses that get little use as more family members migrate, she said. Others find their hopes dashed when their relatives’ wages are so low that remittances do not meet their needs.

Murúa recalled a 15-year-old boy whose brother needed a kidney transplant. “No one told the family what would come after the transplant,” she said.

The teenager dropped out of school and migrated to earn money for the surgery, which was successful, but the family could not afford the cost of post-transplant medicine, and one by one, other relatives migrated to find jobs. After eight years, the young man who had the transplant stopped taking his medication because of the cost. He died a year ago, Murúa said.

Every family has its own story. Some migrants return “alcoholic and worse off than they were before,” she said. Others come back with a stronger sense of their own identity and abilities. “For them, it is a new moment,” she said.

Neither Delgado Wise nor Murúa sees an end to the northward flow of migrants that has become a cog in the wheel of the global economy, by providing cheap labor, and in the Mexican economy, where many people -- from coyotes to kidnappers to corrupt officials -- have turned migration into a business.

As U.S. immigration policy focuses on border control, people lose sight of migrants’ contribution to the U.S. economy, said Delgado Wise, whose center has studied the impact of taxes paid by migrants.

“We calculate that one of every four retirees [in the United States] is financed by a migrant, and one out of every five by an illegal migrant,” he said.

Although advocates lobby for greater U.S. development aid to migrants’ countries of origin, most U.S. aid to Mexico goes to law enforcement and drug-control projects, especially with the Mérida Initiative, a $1.8 billion program aimed at stemming the flow of drugs from Central America and Mexico to the United States.

Of more than $760 million in U.S. foreign aid to Mexico in 2009, only $11 million was earmarked for development projects that could help provide livelihoods for people to stem migration, according to a study by the nonprofit organization Bread for the World.

The greatest step toward a solution, however, is building healthy, diversified economies in the migrants’ countries of origin, Delgado Wise said, citing the example of Brazil, which is becoming known as the region’s “tiger.”

Nevertheless, Murúa said, some people will always choose to migrate. In particular, she says, young people in rural communities no longer want to stay on the family farm and they migrate in search of a different life.

That has occurred even in Acteal, where the members of the Maya Vinic cooperative are trying to make farming more profitable. “Migration is no longer seasonal,” said Victoriano Hernández, who coordinates technical assistance to the coffee growers and honey producers. “Young people [who migrate] no longer come back.”

With aid from Catholic Relief Services, cooperative members are replacing older coffee plants with younger, more productive stock. Increasing productivity takes time, however, and economic needs are immediate, says Rogel del Rosal, who coordinates the project for Catholic Relief Services. And because both coffee and honey are seasonal products, income from their sale will not meet a family’s needs for the entire year.

“To stop migration, you have to create jobs,” Hernández said. “The only way to help small farmers is to diversify production,” so they have a year-round income, instead of depending on a single crop.

Catholic Relief Services is working with families to ensure their food security, but diversifying into other rural activities -- such as ecotourism -- requires time and “considerable management ability,” del Rosal said.

In the end, governments -- rather than nonprofit organizations -- must address rural development, but they tend to lack long-range plans, he said. “There is no visible strategy for solving the underlying problems.”

[Barbara Fraser is a freelance journalist based in Lima, Peru.]

Quadriplegic immigrant dies after hospital returned him to Mexico

How to treat unaccompanied immigrant children at center of policy debate

A 'maddening' system, from courtrooms to shelters

Survey: Most Americans say U.S. should shelter, not rush to deport, child migrants