But administration says paintings of Columbus will stay

On a campus rich with symbols, none is more central — both geographically and metaphorically — than the University of Notre Dame's Main Building.

Topped by the famous "Golden Dome" and under the watchful eye of a statue of Mary, the building houses major administrative offices, including that of the president. All tours of the campus include a stop there, and its steps are where the marching band gathers before football games.

But lining the walls of the second floor's main hallway are 11-foot murals that send the wrong message about Notre Dame, say more than 450 students, faculty, staff and alumni who have signed an open letter to the university president urging their removal.

The 12 Renaissance-style murals, painted from 1882 to 1884 by Vatican portrait artist Luigi Gregori, depict and celebrate Christopher Columbus, who at that time was seen as something of "American saint," according to a pamphlet produced by University Communications.

But the heroic depiction of Columbus and stereotypical portrayal of Native American people combine for a "highly problematic vision of Western triumphalism, Catholic militarism and an overly romantic notion of American expansion," says the letter, which was published Tuesday in The Observer, the student newspaper and on the Daily Theology blog.

For Dominic Acri, the issue is not merely academic. Every time the senior from Pennsylvania enters the building, whether for a class or to visit the financial aid office, "I am immediately reminded that my university has not addressed the open misrepresentations of indigenous peoples," he said.

Acri, whose family is from the Rosebud Sioux Tribe in South Dakota, serves as president of the Native American Student Association of Notre Dame, whose members represent nine tribal nations. The student group organized the letter to the university’s president, Holy Cross Fr. John Jenkins.

Calling the murals the university's "own version of a Confederate monument," the letter says they are contrary to Notre Dame’s commitment to diversity and inclusion, not to mention the church’s teaching on universal  human dignity.

"African slaves are depicted comically, and Columbus' incipient role in the buying and selling of humans as chattel is depicted as a holy and Christian act," the letter says of the artwork.

The university's response, however is that "the Columbus murals are of historic and artistic value, and the university has no plans to remove them," according to Dennis K. Brown, assistant vice president of news and media and relations for the university.

In response to previous protests about the murals, the university created the seven-page pamphlet, which admits that "the images can be troubling," but notes that they "speak to the past hopes of European Catholic immigrants who wanted to carve out a niche in an often hostile society."

"In the midst of serious anti-immigrant sentiment in the United States at the time, Columbus became a symbol for American Catholics who wished to argue that Catholics had participated in the very founding of the nation and had a meaningful role to play," the pamphlet text says.

Yet it is precisely today's context that prompted Native students and others to once again bring up the issue of the controversial murals. The recent dismantling of some Civil War monuments in reaction to the racism, xenophobia and neo-Nazi sentiment of the past year convinced John Slattery that "this was the right time to do something."

The 19th-century murals in Notre Dame's Main Building are the university's "own version of a Confederate monument." 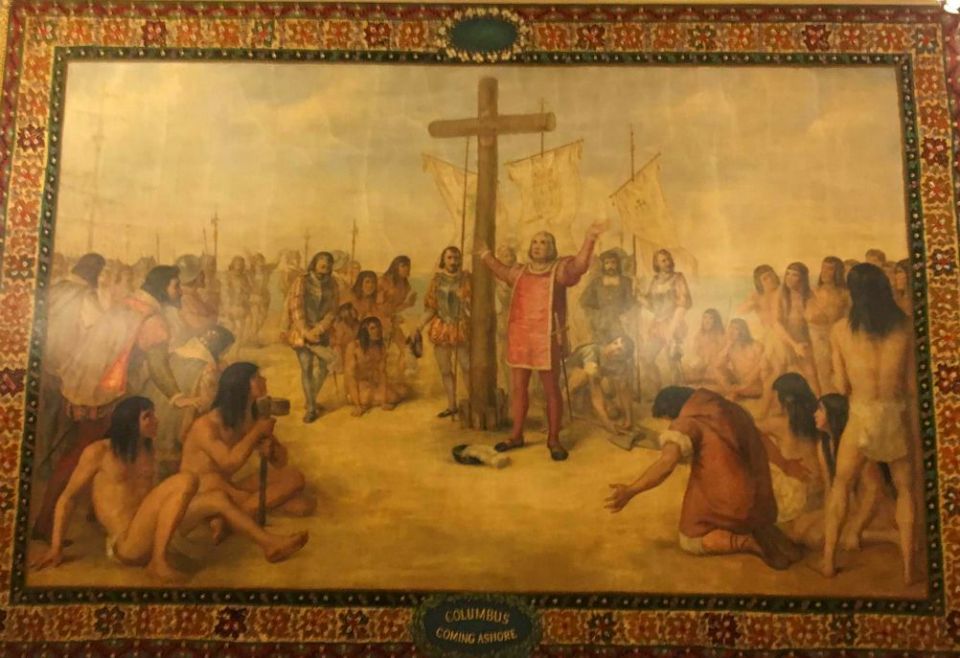 One of 12 murals painted by Luigi Gregori between 1882-84 in the Main Building of Notre Dame University. (Courtesy of the Native American Student Association of Notre Dame)

Slattery, who is a teaching fellow in theology at Notre Dame, says the argument that the murals should be viewed clinically, as historical pieces of art, doesn't hold up.

"There are plenty of historical pieces of art that depict people in negative and problematic ways," he said, but these murals are not in a museum. Instead, the Main Building is filled with images that are revered, he said, from past presidents to winners of the Laetare Medal, given each year for outstanding service to the church and society.

The placement of the murals near these other, revered images "implicitly tells anyone that all these things are Notre Dame," Slattery said.

The letter calling for the murals "to go" does not specify what should be done with them, but urges "more discussion." Some say the murals would be destroyed if removed; a recommendation from a previous student was to hang tapestries over them.

As for Acri, if the murals remain, "they send a message to Native students and everyone alike that Notre Dame supports these misrepresentations of indigenous people."

"Native students at Notre Dame are seeking a larger voice to share our cultures and perspectives with Notre Dame," Acri said, "but at this moment our largest hurdle is overcoming the stereotypes thrust on the community through these murals."

The Native American Student Association of Notre Dame is holding a town hall meeting about the murals Wednesday, Nov. 29, at 7 p.m. in Room 220 of the Main Building. (It will also be live-streamed on association's Facebook page: https://www.facebook.com/NASANotreDame.)

Panelists include Armani Porter, the Native student association's vice president; Michael Schreffler, associate professor of art, art history and design; and Marcus Winchester, director of language and culture for the Pokagon Band of the Potawatomi Indians, whose land is where Notre Dame was built.

Why write the story of the allegations against John Howard Yoder?