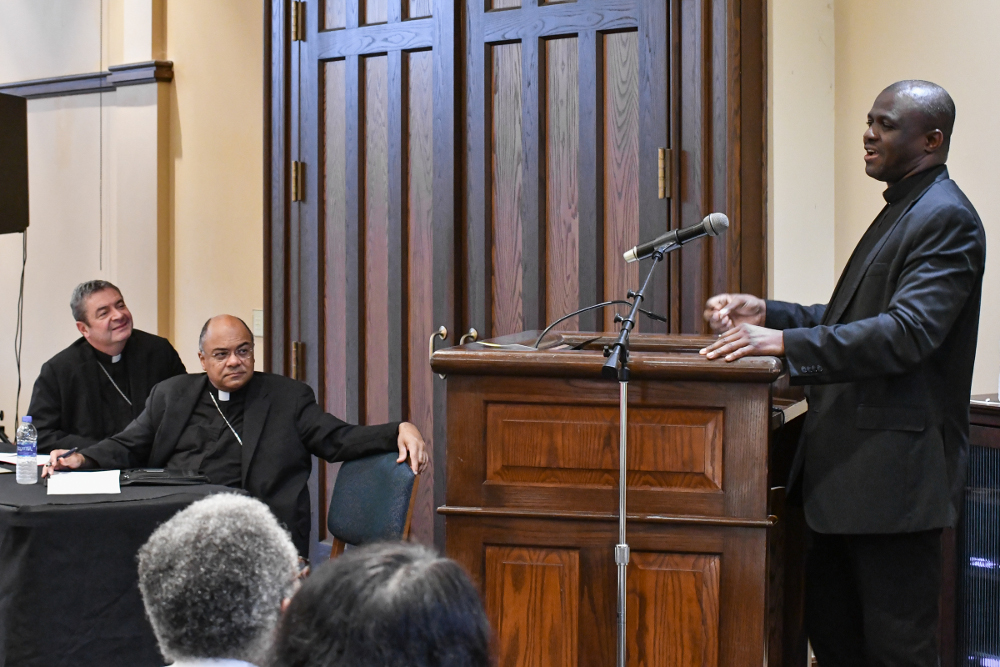 Fr. Hilary Ike of the tribunal of the Diocese of Columbus, Ohio, speaks about his experiences with racism during a listening session at the Pontifical College Josephinum in Columbus June 19, 2019. Looking on are Bishops Robert Brennan of Columbus and Shelton Fabre of Houma-Thibodaux, La., chair of the U.S. bishops' Ad Hoc Committee Against Racism. (CNS/Kent Snow, The Catholic Times)

Participants at a diocesan listening session on racism in Columbus spoke about hurtful experiences both inside and outside the church, but also expressed optimism about efforts to recognize the problem and respond to it.

The June 19 session at the Pontifical College Josephinum was sponsored by the Catholic Ethnic Ministries office in the Columbus Diocese. It was the seventh such event conducted nationwide in response to the U.S. bishops' 2018 pastoral "Open Wide Our Hearts: The Enduring Call to Love — A Pastoral Letter Against Racism." Other sessions were in St. Louis; St. Petersburg, Florida; Cincinnati; Philadelphia; Schriever, Louisiana; and Baltimore. More sessions are planned.

About 150 people attended the Ohio session, which featured brief reflections from 15 speakers who spoke about how racism has affected their lives and about the Catholic Church's response.

Devin Jones of the Catholic Ethnic Ministries office was one of several speakers whose reflections offered a mixture of disappointment and hope. He spoke about attending a nearly all-white Catholic boys prep school in Chicago and said that although he grew up in an all-white Chicago Baptist church, he never heard the most familiar racial slur until his first day at school.

He also said that at a Mass in Florida where he was the first to receive the blood of Christ at Mass, the woman who gave him the cup immediately took it back to the sanctuary after he drank from it and poured the contents out.

A priest once told him to stop evangelizing black people because "they were not intellectually capable" of understanding Catholic teaching.

Jones, 33, said such incidents were not enough to deter him from recognizing the truth of the church's message. He challenged members of his age group to spread that word to others.

"If we truly believe this is the church Jesus Christ founded, we should feel empowered and energetic and be excited to evangelize," he said. "Until this becomes ingrained in the culture of the church, we will never see an end to racism and the sins that result from it."

Several African American speakers mentioned times during the sign of peace at Mass when they felt unwelcome because whites seated near them appeared to be making a conscious attempt to avoid recognizing them.

Grace Neely, wife of the late Deacon Bob Neely, who served St. Dominic Church for 25 years, said her husband also was often asked when he joined the Catholic Church and his response was always: "When I was born."

"People just had no clue a black person could be a deacon," she said. This was particularly noticeable during one experience early in her husband's diaconal service when he went to a parish in a rural area of the diocese to deliver a talk. The Neelys arrived early "and the woman at the door started asking, 'Who are you? What do you want? When does the program start?' Once he said, 'I'm Deacon Neely,' then her whole attitude changed," Grace said.

Since the deaths of Deacon James Davis in 2015 and Neely in 2017, there have been no African American deacons in the Diocese of Columbus, nor are there any in the current diaconate training class. Mark Huddy, diocesan moderator for social concerns, said this is a great disappointment.

Huddy said he experienced racism while growing up in the 1950s and 1960s, but in a different sense.

"My early experience set the default for what I considered normal," he said. "Almost no people of color were present in my world, and that didn't seem odd. Therein lies the problem that is the descendant of privilege — a form of racism that's so institutionalized that it's invisible. Eventually, I learned about things like redlining, school segregation, hiring discrimination and barriers that make it harder for intergenerational property transfer among minorities," he said.

Huddy noted that when "defaults are built into the system, we have to be intentional about overriding them. Efforts such as the bishops' pastoral on racism and this listening session are important because they continue to call us to relationship, so we can learn what we do not know, to confront racism in our family, friends and church so we can truly be the body of Christ."

Deacon Augustine Ampofo of the Archdiocese of Kumasi, Ghana, attending the Josephinum for his final two years of study for the priesthood before returning to Ghana, stressed that "color is just an accident. No one chose to be born any race. Color does not define a person."

He urged participants to "unite in the fight against racism and build a world devoid of fear, hatred and suspicion."

His own encounter with suspicion occurred when he arrived at John F. Kennedy Airport in New York. In the baggage claim area, two Transportation Security Administration guards seized his belongings, asked where he was from, took his passport, brought him to a small room and detained him for about three hours while searching his luggage.

He eventually was told he was free to leave, but by then he had missed his connecting flight to Columbus and had to sleep at the airport. He said he never was told the reason for being detained.

Fabre said in his closing remarks that it will take "perseverance, patience and perspiration" to be successful in overcoming lingering racism in the church. He noted that the U.S. bishops had issued documents against racism in 1958, 1968 and 1979, then took 40 years to address the subject again.

He pledged that it would not take them another 40 years to return to the topic.

"I learned a lot tonight," Brennan said. "Thank you for your courage and your generosity. These are not easy conversations to have, but we end with a profound respect for one another. We need to continue to listen deeply."

Puet is a reporter at The Catholic Times, newspaper of the Diocese of Columbus.