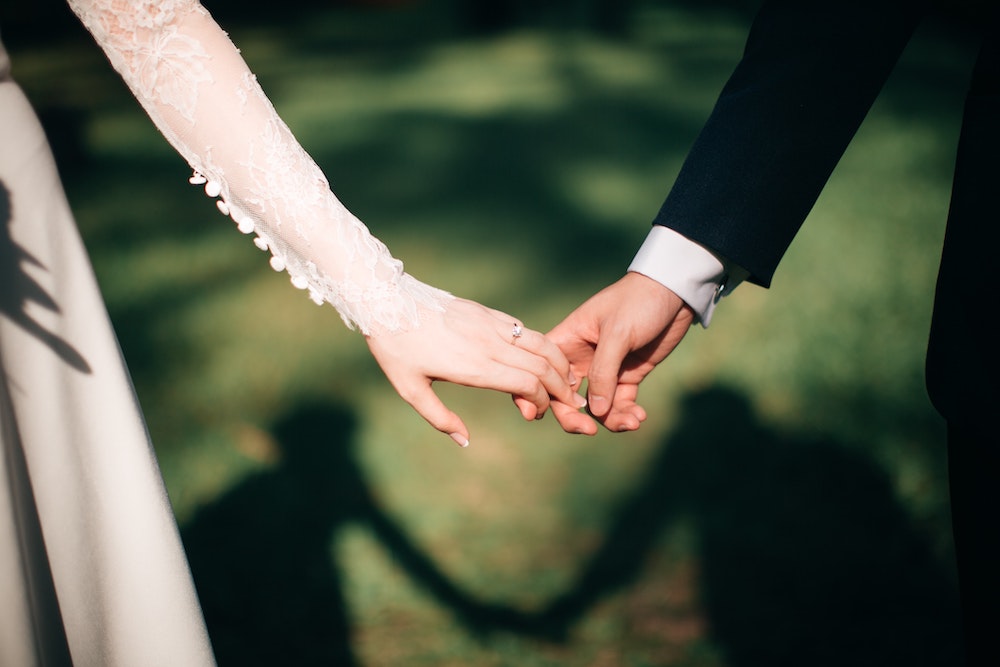 When Elizabeth O'Donnell and her fiancé got engaged in March 2019, they envisioned a big wedding. They're both close to their families, and both of their families are large. The reception was booked at the Old Mill in Rose Valley, Pennsylvania, the same venue where O'Donnell's parents celebrated their reception in 1984. Their wedding Mass was planned for Our Lady of Perpetual Help in Morton. The couple invited 250 people to celebrate with them as they planned to enter into the sacrament of marriage on Sept. 4, 2020.

Then COVID-19 hit. The couple quickly adjusted to a new idea of what their wedding could look like. They pushed their reception to September 2021, at which time they plan to celebrate their first anniversary with loved ones. However, they knew they wanted to have their ceremony in the church on their original date.

"We have been planning our dream wedding and reception for a year and a half, and we have been looking forward to it every day," O'Donnell wrote in an email to NCR. "Now, COVID-19 is a factor. Regardless of how crushing it was to accept that our wedding needed to be rescheduled, we do not feel comfortable putting our family and friends at risk of illness. Furthermore, the precautions that we would need to take would never allow us to meet the expectations of the day we had imagined."

In having a smaller ceremony, however, there could be a previously unforeseen bright spot: the possibility of an outdoor wedding.

"In the church, you walk in wearing your wedding dress and everyone stands on both sides of the aisle. It's tradition," O'Donnell said. "Now that so few people can come to the ceremony, I'd rather get married outside."

While Canon law is rather broad about where a Catholic wedding should take place, dioceses apply their own interpretations.

COVID-19 has thrown engaged couples' wedding plans into disarray. Venues and caterers are closed, large gatherings are prohibited, travel is limited, and wedding licenses are difficult to obtain in some states. Could getting married outdoors help couples and attendees feel more socially distanced and safe, versus being inside a church?

Some dioceses think so.

The Baltimore Archdiocese has permitted outdoor weddings on a case-by-case basis since 2018.

The locations have varied throughout the archdiocese. Nightclubs, bars and casinos aren't allowed, but museums, barns, fields, homes, and high school or college chapels are all acceptable. Since the archdiocese began approving outdoor wedding ceremonies in 2018, the numbers of requests for them have gone up every year. In 2019, 97 different wedding venues were requested and approved.

Most of the outdoor ceremonies consist of a Liturgy of the Word with exchange of consent and blessings, sans Mass.

"Generally speaking, under our guidance, the outdoor weddings aren't celebrated with a Mass," said Diane Barr, chancellor of the Baltimore Archdiocese. The non-Mass format "allows for more flexibility on location," she said.

In the past six weeks, an increased number of couples have requested getting married outside of churches in the Baltimore Archdiocese. However, more couples in the archdiocese are currently rescheduling their previously planned weddings than they are requesting to shift them outdoors.

Perhaps it's because couples prepare for marriage for at least six months. Weddings for 2020 were scheduled and their locations were booked pre-COVID-19. Now that the pandemic is a reality, an even greater increase in requests for outdoor weddings could arise among couples who are planning weddings for 2021 or 2022.

In Montana, where it's too cold to comfortably marry outside during the spring and only 50 people are permitted at any gathering, there hasn't been an uptick in requests for outdoor weddings thus far. According to Fr. Jeff Fleming, director of chancery services for the Helena Diocese, that's because of the planning required for weddings.

"It does require a process," said Fleming, who has officiated at eight to 10 weddings outside of church facilities.

The diocese had outdoor weddings scheduled for this summer long before COVID-19 became a reality. Now, couples are grappling with uncertainty surrounding their upcoming nuptials.

"The biggest fear I'm hearing from couples is the unknown," Fleming said. "Is there going to be a vaccine or is there going to be a resurgence? When will we enter phase three? Because of the unknown, some couples are opting to do something really small, like a church ceremony in the building. One couple was scheduled to get married outside over the summer, but because of the pandemic they got married in May in their hometown church instead." 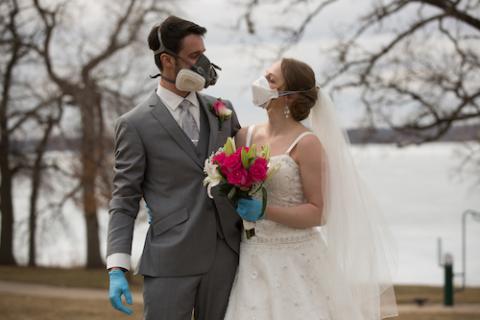 John and Catherine Braun of Buffalo, Minnesota, pose for a picture after their wedding ceremony at St. Francis Xavier Catholic Church March 21, during the coronavirus pandemic. (CNS/The Catholic Spirit/Dave Hrbacek)

"It's not practical to have a wedding Mass outdoors; the logistics are a nightmare," Fr. Paul Clark, judicial vicar for the Harrisburg Diocese, told NCR "Weddings are a lot of work for our priests. If the Mass were outdoors, they'd have to drag the Mass kit. They'd have to hire a wedding coordinator to make sure that everything for Mass is at that venue. We don't want hosts flying around in the wind in inclement weather. On church grounds, the Mass can be more controlled."

As the diocese begins to reopen, though, Harrisburg Bishop Ronald Gainer has encouraged priests to hold weekly or daily Mass outdoors on parish grounds whenever possible.

"People perceive it to be safer," Clark said. "My parish is in the country where we have 16 acres. We're going to have Mass outside. We're already poised to do it. I've heard a lot of people say, 'If it's outside, I'm definitely coming.' "

"I do expect an uptick," he said. "And getting married in an outdoor Mass on parish grounds is a different request than Mass outside in the Hershey Rose Garden."

For their part, O'Donnell and her fiancé are hoping to have an outdoor wedding ceremony this fall, if the Philadelphia Archdiocese will allow it. However, Fr. G. Dennis Gill, director of the archdiocesan Office for Divine Worship and rector of the Cathedral Basilica of Sts. Peter and Paul, said that the Philadelphia Archdiocese "typically does not allow outdoor weddings."

He noted that there hasn't been an increase in requests, possibly because the archdiocese doesn't have a tradition of outdoor weddings. (Interestingly, the Philadelphia Archdiocese does allow its parishioners to travel to marry outdoors in the Harrisburg Diocese.)

If couples like O'Donnell and her fiancé were to request an outdoor wedding, the bishop would have to review their individual case and grant permission.

"Nothing is not possible," Gill said. "The pandemic is an unusual time."

Then there are couples who don't desire an outdoor wedding even though the virus could pose a danger to large group gatherings. 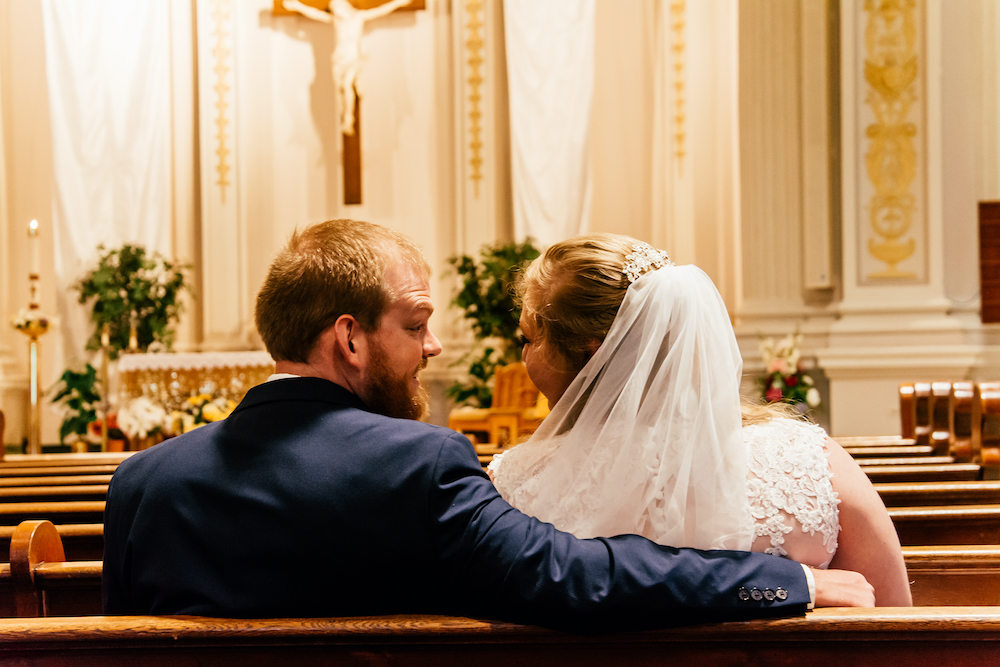 Matthew and Bethany Vogel share a moment in a pew at St. Elizabeth of Hungary Church in Germantown, Kentucky, April 25, the day of their nuptials amid the coronavirus pandemic. (CNS/Courtesy of The Record)

Jennifer Rubio-Reyes and her fiancé, Frank Santana, invited 378 people to their June 19 wedding in Virginia. The couple tentatively pushed their reception to August 2020, with the understanding that they might ultimately have to push it to 2021. However, their ceremony is still scheduled for its original date.

The Arlington Diocese, in which Rubio-Reyes and Santana will marry, now allows but does not mandate public Masses to be celebrated at up to 50% capacity, according to the diocesan website.

All Saints Catholic Church in Manassas, where Rubio-Reyes and Santana plan to wed, is operating at less than 50% capacity with a number of pews roped off. The building will be sanitized before and after the ceremony. The congregation will wear masks, although Rubio-Reyes, Santana and the presider won't.

"Technically, we are allowed to do it," Rubio-Reyes said. "Our church holds 1,500. At 50% capacity, we could have 700 people in there." (A staff member at All Saints later clarified that the church is actually only permitting just over 300 attendees per Mass with appropriate social distancing in between persons.)

When asked if she would prefer an outdoor wedding in light of the pandemic, Rubio-Reyes responded that the priest officiating her wedding didn't offer the option to hold the Mass outdoors.

"I guess we're a little bit more traditional in that sense," she said.

Still, Rubio-Reyes doesn't seem overly apprehensive about the size of the affair. She and Santana expect that some guests won't attend; they plan to livestream the Mass so that family can watch it from afar.

Nonetheless, in spite of health threats posed by COVID-19, she thinks that many of her family members will travel to the wedding from out of state.

"I think a lot of my family will come for the Mass and stay in hotels," Rubio-Reyes said. "They can throw caution to the wind sometimes."

A version of this story appeared in the June 26-July 9, 2020 print issue under the headline: Outdoor Catholic weddings could be pandemic trend.