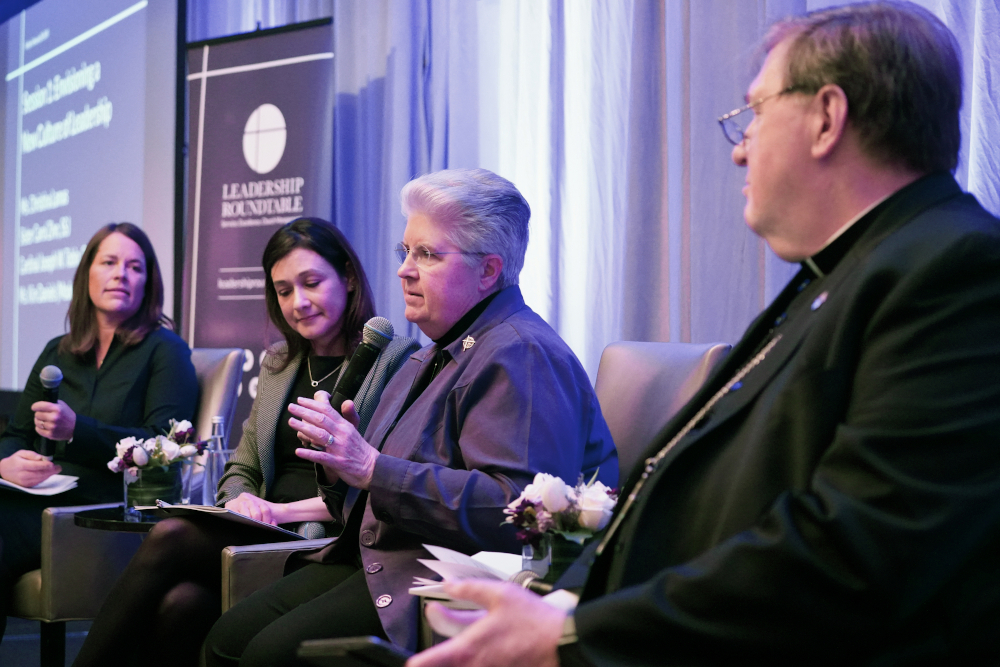 These speakers participate in the Catholic Leadership Roundtable in Washington Feb. 28, 2020. From left are moderator Kim Daniels, the associate director of Georgetown University's Initiative on Catholic Social Thought and Public Life; Christina Lamas, the executive director of the National Federation for Catholic Youth Ministry; Sister Carol Zinn, a Sister of St. Joseph who serves as executive director for the Leadership Conference of Women Religious; and Cardinal Joseph W. Tobin of Newark, N.J. The event was organized to respond to the clergy sexual abuse crisis through a new culture of leadership in the church. (CNS/Ralph Alswang, courtesy Leadership Roundtable)

Once the Vatican releases the McCarrick report, the church must listen to the reaction to it in a "spirit of humility" and must seek to "make reparation, learn and keep moving forward in a new way," said a leading U.S. woman religious.

Sr. Carol Zinn, a Sister of St. Joseph from Chestnut Hill in Philadelphia, who is executive director of the Leadership Conference of Women Religious, made the comments in a call with news media following the Catholic Partnership Summit, held Feb. 28-29 in Washington.

She said she hopes that as Catholics react to the report, "the church would take a listening stance rather than a defensive one," to acknowledge it and recognize that "the institutional church, cannot govern itself the way it has governed itself before."

Zinn also urged church leaders to remember Christ's paschal mystery — that the Lord's passion and death came before his resurrection.

In 2019, the Vatican announced that Pope Francis, at the conclusion of a process conducted by the Congregation for the Doctrine of the Faith, imposed on Theodore McCarrick the penalty of his dismissal from the clerical state, prohibiting him from functioning in any type of priestly ministry.

McCarrick, who was the archbishop of Washington from 2000 to 2006 and earlier was a priest and auxiliary bishop in New York and the bishop of Metuchen and the archbishop of Newark in New Jersey, was found to have engaged in "sins against the Sixth Commandment with minors and with adults, with the aggravating factor of the abuse of power."

The Vatican report is expected to spell out how McCarrick rose in the leadership ranks of the church despite accusations of misbehavior having been made against him. It is not clear when the report will be released.

Summit participant Jonathan Lewis, assistant secretary for pastoral ministry and social concerns for the Archdiocese of Washington, told media on the call that the McCarrick case offers a reminder for Catholics of their own call to holiness and to try to live that "in all facets of public and private life."

"The sacrament of confession teaches us that the first thing we do is say we're sorry, and then we receive penance, to resolve to live differently," he said.

The Catholic Partnership Summit had as its theme, "From Crisis to Co-Responsibility: Creating a New Culture of Leadership." It drew 260 Catholic leaders from 63 U.S. dioceses, including bishops, diocesan staff, Catholic university presidents, corporate leaders, abuse survivors, philanthropists and more than 30 young adults.

Zinn, Lewis and others on the call with media were asked what other takeaways from the summit might be offered to Catholic leaders regarding challenges they are now facing, including how to respond to the spread of the coronavirus.

"I am sure that every diocese is going to pay attention to the CDC (the Centers for Disease Control and Prevention) and what it tells us, and also draw upon knowledge from within their own communities, and adopt the standard measures that all of us are going to have to face," said summit participant Fr. J. Bryan Hehir, who is secretary for health and social services for the Archdiocese of Boston.

"But my impression is that no one in this society has a complete game plan on how to do that, so this is an area the church has to listen to wider secular society in health care and do what is right and best according to best standards," said the priest, who also is the Montgomery professor of the practice of religion and public life at Harvard's Kennedy School of Government.

"Everybody in this society is right this minute in a matter of trying to develop that game plan," he said.

When asked what takeaways the summit might offer for young adult Catholic leaders across the United States, Lewis said, "Well, I think the message to young people in the life of our church is to not wait to be involved and use your gifts."

"Be emboldened by our life of faith, our baptismal call, to get in the game," he continued. "I remember one comment, young people shouldn't wait and feel they have to pay their dues in order to take on a leadership role in the church. So reflect on your gifts and be willing to boldly put them in action, not only in the parish, but in our daily life, there's a need to really lift up people in every strata of public life, to be Christian witnesses."

With regard to church management, there is "a need for young people who work in the business community to use and leverage those gifts on behalf of the wider church," Lewis said, adding, "We certainly shouldn't be in the back pew waiting for someone to tap us on the shoulder to get involved."