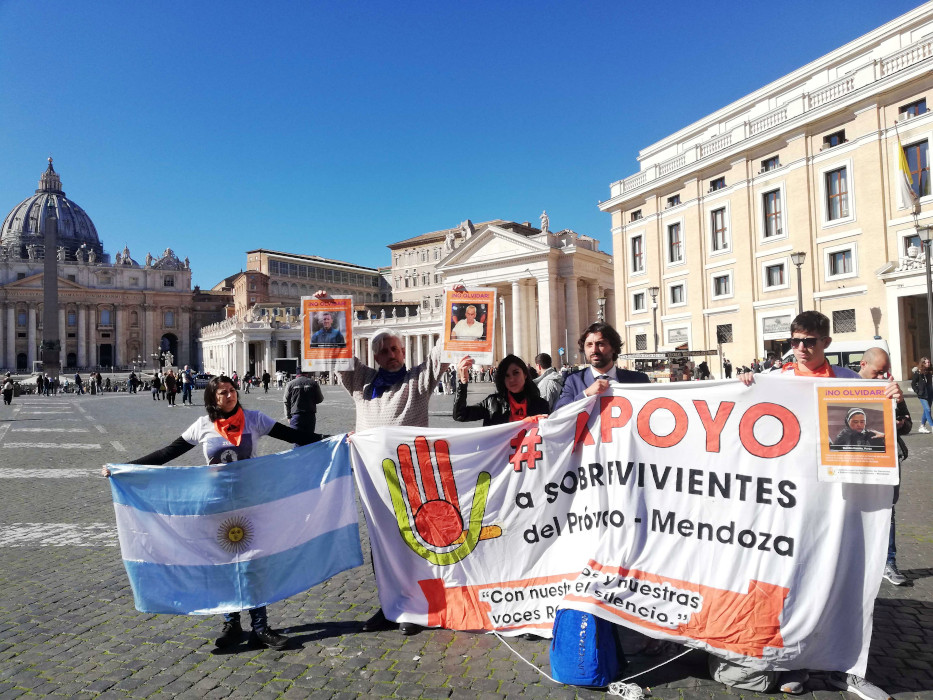 One year after Pope Francis called for a summit of Catholic bishops at the Vatican, abuse survivors flocked to the Eternal City on Feb. 20 to report a lack of progress and accountability in the fight against clergy sex abuse.

Three Argentine deaf abuse survivors of the notorious pedophile priest Nicola Corradi, who in November was convicted and sentenced to prison for the abuse of students at the Provolo Institute for Deaf and Hearing Impaired Children, gave a press conference in Rome on Feb. 20 and stood in St. Peter's Square demanding justice and reparations from the Catholic Church and Francis.

"We demand a law that obligates the Vatican to stop the coverup and change the situation decisively," said Daniel Sgardelis, one of the Argentine survivors, with the help of an interpreter at the press conference.

"The deaf have always suffered abuse from priests, and we need this to change. That's enough!" he added.

Another survivor, Ezequiel Villalonga, explained that the group had just returned from a meeting with United Nations officials in Geneva where they accused the Catholic Church of withholding crucial evidence, failing to collaborate with civil authorities and refusing to pay reparations to the 24 victims of Corradi in Argentina.

"In Argentina we haven't gotten justice," Villalonga said. "Now we are survivors and we know our rights and we demand for this to stop."

The deaf victims of Corradi and other members of the Catholic clergy in Argentina were accompanied by their lawyers and representatives from other international survivor networks, Ending Clergy Abuse and bishopaccountability.org.

Corradi was a member of the religious order the Company of Mary, dedicated to the care of the deaf and mute and based in Verona, Italy. In 2009, he was accused of sexually abusing the deaf students at Antonio Provolo Institute for the Deaf along with another 24 priests, brothers and laypeople between the 1950s and 1980s. Over 65 deaf people in Verona claimed to have been sexually abused by clergy at the school when they were children.

None of the accused were prosecuted due to the Italian statute of limitations.

In 1970, for reasons that are unknown, the Vatican transferred Corradi and other clergy members, who would later be accused of abuse, to Argentina. He taught in schools at La Plata between 1970 and 1997 and in Mendoza between 1997 and 2016. There he sexually abused deaf students between the ages of 5 and 12.

The prosecutor in La Plata described Corradi's abuses as marked by "unusual violence." The victims reported being tortured, starved and forced to sleep naked outside. Most of the abuse targeted victims with no family, and students were punished if they tried to learn sign language.

The method adopted by the Provolo Institute was based on teaching the deaf to understand language by lip reading and body language. The students who left the institute did not know sign language and were never taught how to read or write.

Corradi was charged along with two others — Fr. Horacio Corbacho and Armando Ramón Gómez Bravo* — and sentenced to 42 years in prison for the sexual abuse of minors. Another trial is underway against nine women — including two religious sisters — who allegedly covered up and enabled the abuse.

Some estimate that over 200 deaf children of the Provolo Institutes from Italy and Argentina were sexually abused by Catholic clergy.

The survivor groups came to Rome to request a meeting with Francis and petition him to put an end to sexual abuse by clergy. On Feb. 20 they stood in St. Peter's square holding banners asking for accountability and zero tolerance for sexual abuse. They will also do a sit in on Feb. 21 at the Vatican's Congregation for the Doctrine of the Faith (CDF), which is charged with addressing sex abuse allegations against clergy all over the world.

"We think Pope Francis has a direct responsibility," said Lucas Lecour, the lawyer of the Provolo victims and head of the Argentine human rights organization XUMEK, in an interview with Religion News Service (Feb. 20).

Lecour said Vatican officials have been withholding crucial information from Argentine prosecutors and investigators, especially the documents resulting from the in-house investigation ordered by Francis starting in 2015.

"We don't care about words, but we care about action," he said, adding that the group plans to demand the documentation be given directly to the CDF.

The document was described as "historic" by papal observers and was released shortly after a Vatican summit of major ecclesial representatives, survivor networks and advocates gathered to address the ongoing sexual abuse crisis plaguing the Catholic Church.

But one year after the summit, Peter Isely, a clergy abuse survivor and founding member of the U.S. based SNAP (Survivors Network of those Abused by Priests), told Religion News Service that, while the rhetoric adopted by Francis "would get an A plus," the follow-up and actions undertaken receive a "D minus."

Francis must undergo a "conversion" in terms of talking about sexual abuse, he added.

"Until you have zero tolerance, you fail," he said.

He described the Provolo case as one of the few sex abuse cases that sees Francis as "directly in the loop," since some of the events took place while he was still Archbishop of Buenos Aires. In May 2014, deaf survivors in Italy wrote to the Argentine pontiff to report their abuse and that the perpetrators were still at large in Argentina.

One of the victims personally handed Francis a letter with that same information in 2015.

"Never count out deaf survivors," Isely said, adding that in his home state of Wisconsin it was the tireless effort of the deaf boys who were sexually abused by Fr. Lawrence Murphy that allowed their plight to come into the public eye. Murphy was accused of sexually abusing about 200 deaf boys at the St. John School for the Deaf between the 1950s and 1970s.

"Deaf survivors to me started this, and I think deaf survivors from Argentina will end it, that's my prayer," he said.

* The original version of this article incorrectly identified Gómez as a priest. He was a gardener at the institute.