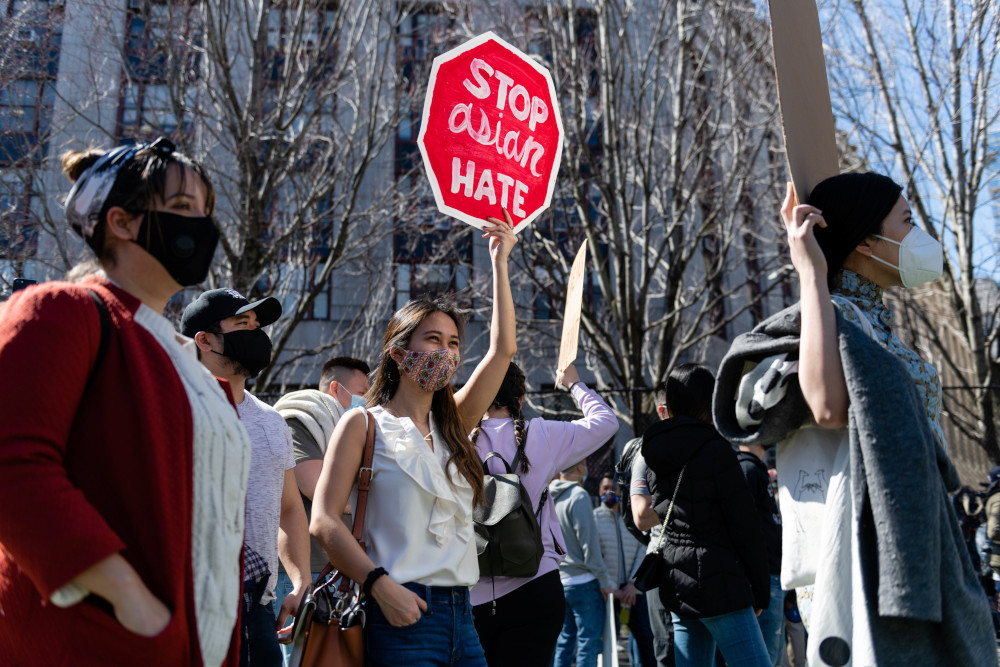 People in New York City are seen during a Rally Against Hate March 21, 2021, to end discrimination against Asian Americans and Pacific Islanders. President Joe Biden March 30 announced plans to crack down on attacks against Asian Americans and Pacific Islanders, including a review of how the Department of Justice can bolster its efforts to track and prosecute hate crimes. (CNS/Reuters/Eric Lee)

At the Unity March, a multicultural event earlier this summer in Washington, D.C., that brought together Asian Americans and allies to advance socioeconomic and cultural equity, racial justice and solidarity, the first half hour featured a slew of religious leaders: a female Korean American Presbyterian minister, a Sikh community leader, a Jewish Filipina rabbi and an African American AME pastor.

The speakers were moving, but I wondered: Where were the Catholics?

When I returned home, a quick Google search informed me that, while Catholic groups had indeed spoken out in spring of 2021 when reported anti-Asian hate crimes were skyrocketing, any action was limited to thoughts and prayers. Yet Catholics who had previously spoken on the issue seemed absent in recent months.

At a time when anti-Asian hate remains endemic in our communities, Catholics of all levels —from the clergy to laity — cannot just offer prayers but also should also serve as allies by actively participating in the "fraternity and social friendship" about which Pope Francis speaks so frequently.

After all, 1 in 5  Asian and Pacific Islander Americans, or AAPIs, is Catholic.

To serve as better allies, Catholics should start to meet us where we are.

Critical to this discussion is "allyship" — a lifelong process of relationship-building based on mutual trust and respect, especially to support a group that has faced marginalization or discrimination. This means that, although an April 2021 USCCB statement against "prejudice and anti-Asian bias" was welcome, more must be done to nurture that lifelong relationship.

Allyship between the Catholic Church and AAPIs — two communities that overlap in the United States and two with which I identify — can develop on various levels. I suggest three general ways Catholics can be better allies to Asian Americans and Pacific Islanders.

Starting from the top, the USCCB Subcommittee on Asian and Pacific Islander Affairs can expand its programming beyond pilgrimages to Washington, D.C., and Masses commemorating hundreds of years of Christianity in Asian countries. In fact, neither of these two outward-facing initiatives truly reach the population of AAPI Catholics, and there is already a separate subcommittee for Asian affairs as part of the USCCB's International Justice and Peace Committee.

Instead, the AAPI subcommittee should shift its focus toward everyday Catholics by holding public dialogues on issues that affect our communities, such as poverty (the greatest wealth gap in America exists among AAPIs) and immigration (language barriers affect everything from employment to health care). It can also establish young adult ministry networks and facilitate Bible studies and retreats, much like the Subcommittee on African American Affairs does for African American Catholics. Renaming the Subcommittee on Asian and Pacific Islander Affairs to include the word “American” can also help narrow this mandate.

On a diocesan level, bishops and archbishops should work more closely with priests from multilingual parishes to bring communities of different language and ethnic backgrounds together. Growing up, I attended Mass in Mandarin Chinese in the Los Angeles Archdiocese at a church that also provided services in Spanish and English. However, we Mandarin-speaking parishioners rarely, if ever, interacted with Spanish- and English-speaking worshipers. Although language barriers naturally silo communities with different backgrounds, it often seemed that our Catholic identity came only second to our cultural identities.

Local bishops can do more to bridge these fractured communities in the spirit of one, unified, Catholic Church. For example, multilingual services for Holy Days would be an easy way to bring communities together. Parish-sponsored faith-sharing activities or community service events could also provide environments for community mixing. With more interaction among all parishioners, priests could more smoothly embed cross-community messaging into their homilies — such as condemning anti-Asian hate and fostering allyship among individual Catholics.

Finally, we laypeople also have a responsibility to participate in this allyship, including with Catholics of other minority communities and especially among Catholic youth. Together, Black, Asian and Latino Catholics comprise a larger share of younger U.S. Catholics than do white Catholics. We young people participate in society differently from older generations: We frequent rallies and marches; stream TV shows, movies, classes and webinars; and spend too much time on social media. These are all new opportunities for Catholics to engage with AAPIs and AAPI Catholics, as well as Catholics of other marginalized groups and younger generations.

To serve as better allies, Catholics should start to meet us where we are. I hope to see Catholic leaders at the next Unity March.