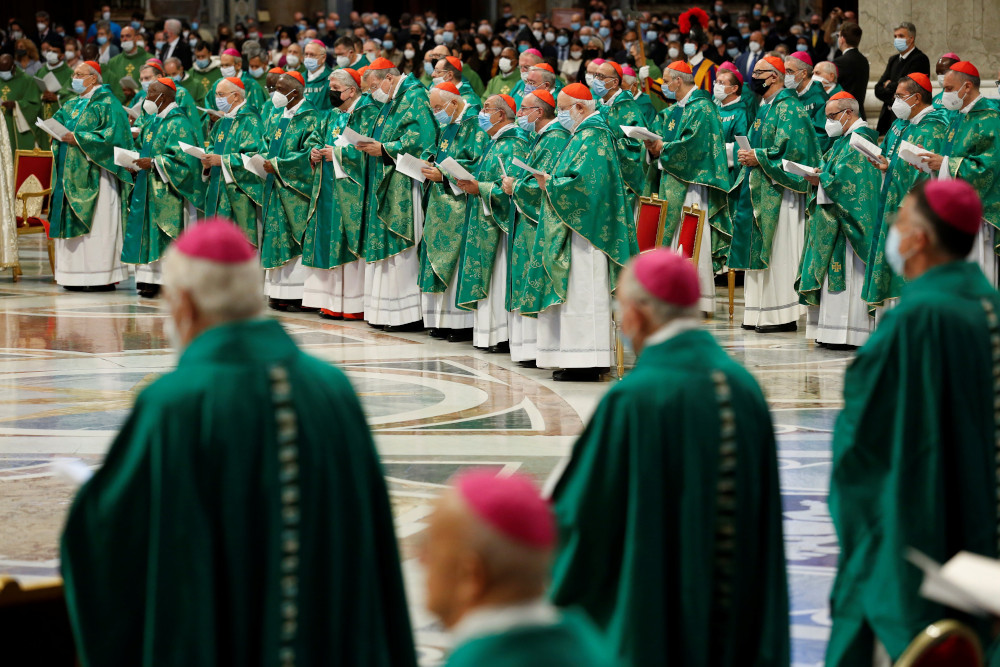 Cardinals and bishops attend Pope Francis' celebration of a Mass in St. Peter's Basilica at the Vatican Oct. 10, 2021, to open the process that will lead up to the assembly of the world Synod of Bishops in 2023. (CNS/Reuters/Remo Casilli)

The conversations about the synodal process are telling. In discussions with friends on the Catholic left, it appears that some are approaching the synod with a clear agenda. Advocacy groups like the Women's Ordination Conference and New Ways Ministry are providing materials for their members to get involved and, to be clear, there is nothing wrong about that. In fact, the Vatican has encouraged such involvement.

I am even told that some pundits and columnists are voicing strong opinions on what the synod can or should accomplish! Heaven forbid!

Still, I have a warning: Agendas misunderstand what synodality is about. They are so thoroughly American, we take them for granted, but the phenomenon warrants some attention.

We Americans are planners and doers, and we conceive of grand projects with definite objectives. Our history is marked by the completion of such projects: the Erie Canal, the transcontinental railroad, Lindbergh crossing the Atlantic in a solo flight, sending astronauts to the moon.

It is one of the essential, problematic facts of American history, and one I confess I shall never completely understand, that the dominant intellectual and moral force in early British America, Calvinism, was so keen to defend the omnipotent sovereignty of God, yet gave birth to a culture that would prove such fertile soil for the myth of the self-made and the cult of libertarian patriotism.

Our democratic norms invite, and reward, those whose commitments to specific goals, whose tenacity and even single-mindedness, whose activism, changed the political and social landscape: Abraham Lincoln's commitment to the preservation of the Union, Teddy Roosevelt's commitment to the preservation of our great national parks, Susan B. Anthony and the suffragists overcoming all manner of obstacle, and the Rev. Martin Luther King Jr. challenging his fellow ministers to consider their complicity in the injustice that landed him in a Birmingham jail.

And, of course, many, probably most Americans take their cultural cues from the world of business. What's good for General Motors is good for America. And businesses require an agenda, a goal, a target, that will bring the entire organization into sync, moving in the same direction. Back when I ran a small business, I remember the owner telling me, "Remember, it is OK to make the wrong decision, just never avoid making a decision. If everyone is moving in the same direction, you can always change direction, but without a decision, you invite chaos."

There is a time and a place for religiously motivated activism to be sure, but the synod is not that time and place. The synod requires us Americans to set aside our activist, goal-oriented, project-centered sensibilities.

There is a time and a place for religiously motivated activism to be sure, but the synod is not that time and place.

In his address opening the synodal process last October, the Holy Father began by clearly articulating his understanding of what an ecclesial synod requires.

The pope said, "You have come by many different roads and from different Churches, each bearing your own questions and hopes," thus affirming the need to engage, to share, to demonstrate parrhesia.

He continued, "I am certain the Spirit will guide us and give us the grace to move forward together, to listen to one another and to embark on a discernment of the times in which we are living, in solidarity with the struggles and aspirations of all humanity."

The Spirit will "guide" and "give," which suggests participants must be docile and receptive, the very opposite of assertive, agenda-driven and activist.

"I want to say again that the Synod is not a parliament or an opinion poll," the pope said. "The Synod is an ecclesial event and its protagonist is the Holy Spirit."

An ecclesial event will require an ecclesial language, yet how many arguments, across the ideological spectrum, instead offer sociological reasons and polling data to justify a theological conclusion?

The pope concluded that opening paragraph with this stunning statement: "If the Spirit is not present, there will be no Synod."

Our conservative friends seem not only incapable but unwilling to embrace the synodal process. "If we're honest Christians, listening to others is not an endless process which enables us to put off forever the effort to preach Christ and Him crucified, but merely an act of love for the purpose of finding out how best to acquaint them with the Gospel and the Church," wrote Jeff Mirus, a cofounder of Christendom College, at CatholicCulture.org. "It seems to me that, far too often today, the constant insistence on listening is used as a means of avoiding the task of telling the truth to those who are likely to tell us to shut up and get lost."

He has a point: Why listen if you have all the answers?

At the Catholic Thing, Francis Maier, former editor of the National Catholic Register, made clear his reservations about the synod, noting that the recommendations from a 2000 archdiocesan synod in Philadelphia had been almost completely ignored in the years before the arrival of his patron, Archbishop Charles Chaput, in 2011. Need anyone point out that in 2000, Pope John Paul II was still pope, and he had systematically made a mockery of synods during his tenure.

Still, Maier's language is instructive: "Steven Covey, the late, great effectiveness guru, liked to remind his readers to 'begin with the end in mind.' I suspect he purloined the idea from Ignatius Loyola. But it's still good advice."

It is also advice that is exactly contrary to the vision articulated by the Holy Father. Steven Covey or Pope Francis? Is it really a difficult choice?