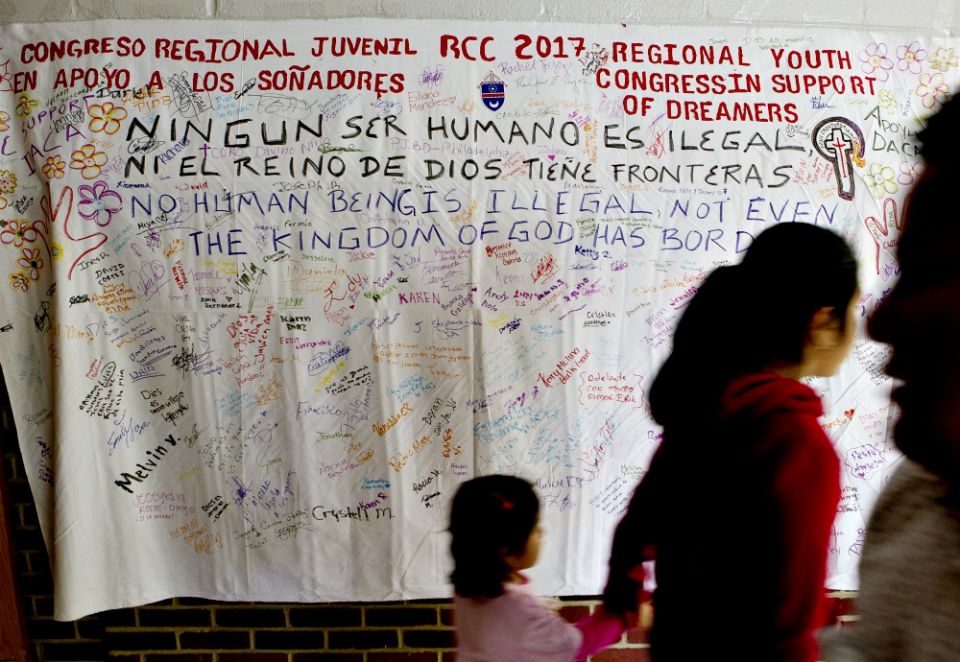 If the DACA kids, sometimes called the "Dreamers," could have a poster child, it should be Jose (not his real name). He has a handsome face and a winning smile. He is also the sort of hard-working, responsible person that any rational immigration policy would want as a citizen.

Jose is a young man, 22, from my former parish in Maryland. Last month, I returned home to officiate at his wedding to a beautiful young woman, Kelly (also not her real name). They had gone to our local high school, but they had never met until they both started working at a local bakery/restaurant.

Kelly remembers that he was shy. She had a hard time getting him to talk to her, let alone ask her out.

Eventually, they discovered that they both liked scary movies. Finally, he asked her if she wanted to "hang out," which I'm told is "millennial speak" for dating. On their first date, he took her to a horror film.

Jose was born in Veracruz, Mexico. At age 6, he was brought to this country, along with his younger brother, then age 3. His mother was fleeing an abusive man in Mexico. She took advantage of a temporary agricultural worker's visa to cross the border with her children. After her visa expired, she stayed on in Maryland, cleaning people's houses to make a living.

Kelly was born in Maryland. She comes from a large Irish/English family with many teachers, firefighters and public servants. She is a nurse at our local hospital.

By most metrics, Jose is a typical DACA kid.

DACA stands for "Deferred Action for Childhood Arrivals." The program was started in 2012 by President Barack Obama by executive order. The program was suspended, again by executive order, on Sept. 5, 2017, by President Donald Trump. What to do about the DACA kids is currently being debated in Congress. Just under 800,000 people had been granted a "deferred action" under the DACA program.

Jose is typical of the "Dreamer" kids. They come from 25 different countries, but the vast majority, like Jose, are from Mexico. Their average age at arrival was 6 years old, like Jose was when he arrived. Today, their average age is 24 years old. Jose is 22.

To qualify for DACA, an applicant must meet rigorous criteria. They must have been brought to the U.S. before the age of 15, and they must have been living here continuously for at least five years before application. They must be in school, or be a high school graduate, or have a GED, or be serving in the military or honorably discharged from the military. They can't have any felony conviction or serious misdemeanors.

They must give the government all their biometrics data (fingerprints, DNA), so the government can keep track of them. The government checks to be sure you are not a terrorist. Applicants must pay a $360 registration fee (which is going up).

They only get a deportation deferment for two years. That means they will not be deported for two years and will be permitted to work or go to school. They are given a Social Security number. They do not get citizenship or even permanent residence status, a "green card."

Obama had to start the program by executive order because the Congress refused to do anything about the "Dreamers." Trump has asked Congress to do something by March, but nothing has been done yet.

Nobody really wants to see these young people deported. Hundreds of thousands of law-abiding, tax-paying, hard-working people would lose their jobs. Families would be torn apart. People serving in the military would be deported. Young people would have to leave the only place they have ever known and be sent to countries they may never have visited.

Jose currently works at our 911 call center. His bilingual skills are useful there. Because of his marriage, he is now a legal permanent resident of the U.S. He hopes one day to enter the police academy and become a police officer. In five years, he will be able to apply for citizenship.

Jose is very much a part of our community. Since the age of 6, Jose has lived in Maryland. He speaks perfect English. He was an outstanding football player in high school. After graduation, he went back to the high school for several years to volunteer for the football program as an assistant coach.

Three years ago, he joined the Catholic Church through our RCIA program for adult converts. That year, we went on retreat together. Although he had been baptized as a baby in Mexico, he had never practiced the faith until he met Kelly, who suggested they go to church together.

When we were on retreat, I asked him about his immigration status. "Why don't you just marry Kelly and then you could become a citizen?"

His answer to me was touching.

"I don't want her ever to think that I proposed marriage just so I could get a green card. I want her to know that I married her because I love her and for no other reason."

That moment brought tears to my eyes. Jose is a man of integrity. The DACA program gave him the legal status he needed to propose to Kelly with a clear motivation of love.

At their wedding, I mentioned his refusal to propose to her until there could be no question about his motives. He is the kind of young man any good society should want.

His dream to marry Kelly and live here is coming true. There are hundreds of thousands more like him. Jose would only be the poster child.

[Peter Daly is a retired priest of the Washington Archdiocese and a lawyer. After 31 years of parish service, he now works with Catholic Charities.]

Column | Any rational immigration policy would want Jose as a citizen