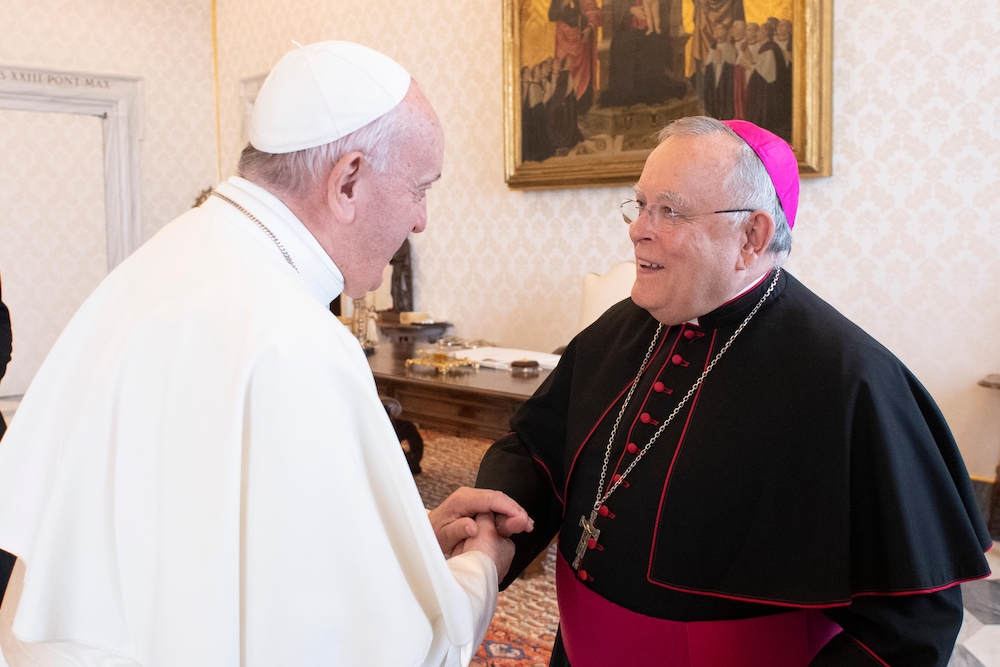 Pope Francis greets Archbishop Charles Chaput of Philadelphia during a meeting with U.S. bishops from New Jersey and Pennsylvania in the Apostolic Palace at the Vatican Nov. 28, 2019. (CNS/Vatican Media)

Last Thursday was a good day for Archbishop Charles Chaput, the former archbishop of Philadelphia. He got to call Pope Francis a liar in the pages of First Things.

Chaput was ostensibly responding to an article published in America magazine in which Austen Ivereigh discussed Pope Francis' comments about EWTN, the conservative Catholic media network.

And Chaput acknowledged the linkage. "To be fair, Ivereigh's article simply elaborates on comments that Pope Francis made recently to Jesuits in Slovakia," he writes. "Pope Francis didn't name the offending media organization, but as journalists quickly confirmed, he meant EWTN." When he goes on to explain that EWTN is not nearly as fearsome as, say, Facebook, and that EWTN star Raymond Arroyo is less of a threat to the church than Chinese leader Xi Jinping, and that as a former board member at EWTN, he is aware of its strengths and its weaknesses, he is wrestling with Ivereigh.

But then he gets to the central contention of his article: "And any suggestion that EWTN is unfaithful to the Church, the Second Vatican Council, or the Holy See is simply vindictive and false."

Being unfaithful to the church is exactly what Pope Francis said EWTN was. "There is, for example, a large Catholic television channel that has no hesitation in continually speaking ill of the pope," Francis said to the Jesuits in Slovakia. "I personally deserve attacks and insults because I am a sinner, but the church does not deserve them. They are the work of the devil. I have also said this to some of them."

Archbishop Chaput now states that such a claim is "simply vindictive and false."

How does Chaput square EWTN's consistent effort to demonize immigrants in Trumpian fashion, for example on this episode of "The World Over" and this one with his claim that they are faithful to the Holy See, which has made care for migrants an obvious priority for many years?

The church has long called for universal health care, and how could it not? Our founder, Jesus, ministered to the people of his time by healing the sick wherever he went. But EWTN was only too happy to peddle lies about the Affordable Care Act. Is that being faithful to the church?

Pope Francis' apostolic exhortation Amoris Laetitia, and the two synods that led up to it, were a source of constant criticism at EWTN. Indeed, the only cardinals Raymond Arroyo routinely books are those like Cardinal Raymond Burke and Cardinal Gerhard Muller, who led the opposition to Amoris Laetitia. (In fact, Mueller appeared on EWTN last week saying the consultation before the synod is "unnecessary.")

The list goes on. Their continued effort to claim the mantle of orthodoxy for themselves while casting aspersions on the pope's orthodoxy is at least quasi-schismatic. From climate change to the traditional Latin Mass to the appointment of American cardinals to synodality, EWTN's twin news programs, News Nightly and Arroyo's weekly "The World Over," have been conspicuous in highlighting the pope's critics and never his defenders. Even conservative prelates like Cardinal Sean O'Malley do not make the cut for Arroyo anymore because — imagine that! — O'Malley takes his vow of obedience to the pope seriously.

Chaput once took that same vow, the vow of obedience all bishops take. At his episcopal ordination, Chaput, like all bishops, made several promises but one of them is fidelity to the pope. "Do you resolve to build up the body of Christ, His church, and to remain in unity with that body, together with the order of bishops, under the authority of the Successor of St. Peter the Apostle?" he would have been asked, to which he would have replied: "I do." Then he would have been asked, "Do you resolve to render obedience faithfully to the Successor of Blessed Apostle Peter?" Again, he would have replied, "I do."

If Francis is not Peter, there is no Peter.

Chaput goes on to criticize Massimo Faggioli for his book Joe Biden and Catholicism in the United States. He says the work "qualifies [Faggioli] for courtier status," but the only court he has mentioned so far is that surrounding the pope, not the president. Faggioli's book showed he likes our president, and considers him the right man for the job at this moment in history in large part because of his Catholic sensibilities and faith, but he was hardly fawning.

If you want to see a Catholic fawn over a political leader, recall Arroyo's interviews with President Trump. That was sycophancy of the highest order.

The criticism of Faggioli does not really fit into the rest of the article. It seems like Chaput just wanted to get it off his chest. He similarly criticizes an article in Civilta Cattolica by Jesuit Fr. Antonio Spadaro and Protestant minister Marcelo Figueroa, which he claims was characterized by "melodrama and ill-will." I thought it was spot-on. To each his own, but why is Chaput lumping that article into his defense of EWTN?

It is sad really, but does it matter what a retired archbishop thinks? After all, the rising stars of the hierarchy are not men of his culture war mien. Archbishop Mitchell Rozanski in St. Louis and Archbishop Paul Etienne in Seattle — these men are pastors, more in the mold of Pope Francis. Bishops more like Chaput get Crookston, not Chicago.

However, one of Chaput's former auxiliaries, Archbishop José Gomez, is president of the bishops’ conference and sits on the EWTN board. There is a majority of bishops who still would side with Chaput over the pope on any one of a number of issues. Now that Chaput has called the pope a liar, it is time for men like Gomez to decide: Are they with their patron or with their pope? And to let the rest of us know where they stand. The people of God need to know if our bishops are leading us into schism or not.