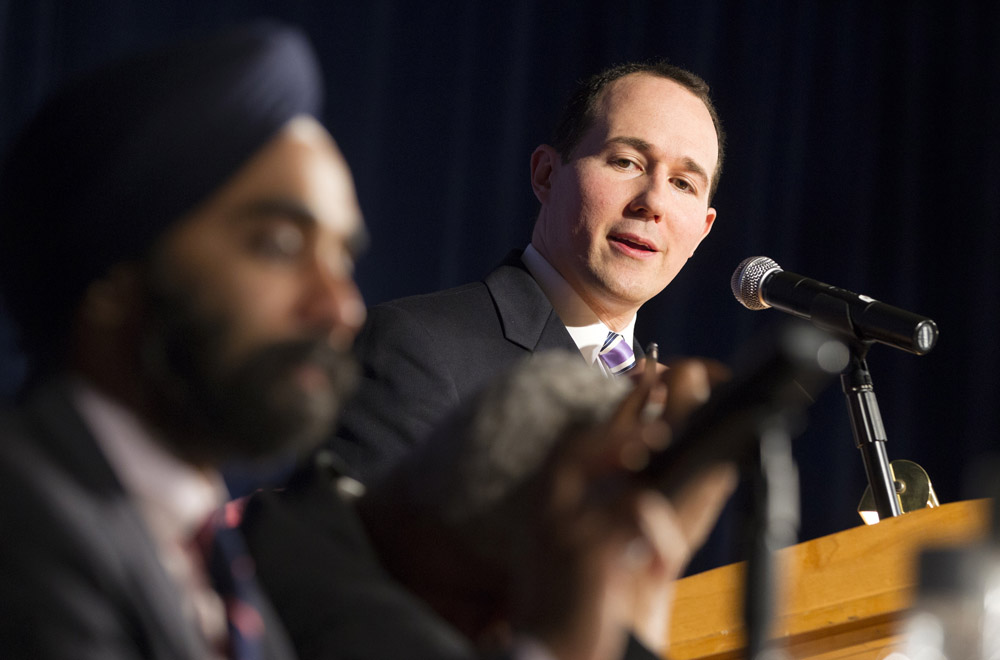 Raymond Arroyo introduces Amardeep Singh of the Sikh Coalition during a roundtable talk May 30, 2013, at the National Religious Freedom Conference in Washington. (CNS/Nancy Phelan Wiechec)

Regular viewers of Eternal Word Television Network's "The World Over" hosted by Raymond Arroyo have come to expect a right-wing approach to the news of the day. Touting himself as an orthodox and serious Catholic, Arroyo regularly features guests who attack Pope Francis and his approach to secular news has been a kind of Catholic version of FOX News. You might say Arroyo is Sean Hannity in Catholic drag.

On the issue of immigration, however, one must choose to be with the president or to be with the Catholic Church. Not just with Pope Francis, whose first trip outside of Rome was to the island of Lampedusa, to mourn the loss of migrants who died trying to cross the Mediterranean Sea. But, with the Catholic bishops of the United States as well, who really are as united on the issue of immigration as they are on any other issue. Indeed, the teachings about welcoming the stranger are so clear in the Hebrew Scriptures, and they were so clearly embraced in the life of Jesus who fled Herod's persecution and was a refugee in Egypt, it is difficult to see how a Catholic could stand with President Trump on this issue.

And, even if you somehow found it possible to rationalize support for putting human laws above God's law, even if you believe the propaganda about the evil effects of immigration on our own country, surely any pro-life, pro-family Catholic would understand that the administration's recent decision to separate children from their parents and to restrict the grounds for seeking asylum are so morally depraved as to warrant the strongest condemnation.

Not Arroyo. In his most recent show, he only had questions for the bishops and the immigrants.

You knew you were in trouble early in the segment when he referred to "illegal alien children" as if the more than 2,000 children separated from their parents along our southern border were all the spawn of E.T.

Rather than confronting the immoral policy, Arroyo made excuses, repeating White House talking points about these separations being necessary because of "long-standing American law, connected to the Flores decision, which demands that children be separated from their parents." Then, how come previous presidents, of both political parties, did not separate children from their parents as Trump is doing now?

Arroyo went on to blame the victim. He said, "that loophole is being exploited," although it was not clear what loophole he meant if the law was as clear as he indicated. "There are a lot of people gaming the system….'just throw my kid over the border,' " Arroyo averred.

Arroyo's guest, First Things' senior editor Matthew Schmitz did not question Arroyo's political spin. When asked about Cardinal Joe Tobin's call for the bishops to go to the border to demonstrate their pastoral concern and their protest against these inhumane policies, Schmitz suggested the proposal was "grandstanding."

Later in the week, Arroyo tweeted: "The invocation of scripture to claim a high ground on immigration policy is laughable. The Bible is meant to guide each of us personally to salvation, it is not a public policy handbook to be used as a bludgeon against political combatants. Quotes out of context also contradict." Apart from the very individualistic and Protestantized understanding of salvation expressed here (Pope Emeritus Benedict: Send Arroyo a copy of Spe Salvi!), why are bible quotes fine for conservative issues?

Nor is Arroyo the only EWTN personality whose commitment to the Gospel according to Donald Trump outstrips a commitment to the clear teaching of the Catholic Church. The host of EWTN's "News Nightly" program, Lauren Ashburn, went to Mexico last week. She visited a Catholic Relief Services-run shelter for migrants, where people making the trek from war-torn Central America can stop for a few days of solid food, showers and rest. She interviewed Cecilia Suarez, the head of office in Mexico for CRS.

Suarez deserves an award for not slugging Ashburn when the she asked, "They [the migrants] don't see it in terms of putting a burden on the United States?" Go to 4:35 to see the relevant passage or watch the whole thing if you have the stomach.

In this great country of ours, where people are free to say what they want, far be it from me to suggest that the civic authorities could or should shut down this repugnant programming. But, EWTN presents itself as a Catholic news source. Ashburn advertises her news program as presenting "news from a Catholic perspective."

If EWTN only reached a few thousand people, like First Things, it could be ignored. But, there are hundreds of thousands of Catholics, especially older Catholics and those who are in anyway homebound who turn to the network to strengthen their faith. My dear late father would watch EWTN sometimes and then call me with questions that showed the effect the network's propaganda can have on someone with few if any alternative news sources about the Catholic faith. My dad was no rube. He had been a school principal. But, like many Catholics, his piety was devotional, not intellectual, and he was not much of a reader in his later years. I am happy to say that his son was a good son and patiently explained that EWTN was not a trustworthy source of Catholic perspective.

Russell Moore, president of the Southern Baptist Convention's Ethics and Religious Liberty Commission, put his neck on the line denouncing the policy of separating children from parents. He also explained how Attorney General Jeff Sessions' citation of Romans 13 as justifying the policy was misguided and the text actually required laws to be just, which this one was not. "We all have moments when we could use a little more time in Sunday school, and this is one of those moments for the Department of Justice," Moore chided.

Former First Lady Laura Bush rarely spoke about specific policy issues when she lived in the White House with her husband, President George W. Bush. But, she took to the The Washington Post op-ed page Monday to state the obvious: "I live in a border state. I appreciate the need to enforce and protect our international boundaries, but this zero-tolerance policy is cruel. It is immoral. And it breaks my heart."

EWTN answers to its own board. It is not an official ministry of the church so the bishops have no particular authority over it. But, the network presents itself as Catholic and it does need the permission of its local bishop to do things like say Mass on television. And, other bishops can certainly warn their people that EWTN does not speak for them. Certainly the bishops can put pressure on the Knights of Columbus to cease funding the network until changes are made. Or they can call for it to be shut down.

I admit the irony that someone who writes for the National Catholic Reporter calls on the bishops to do something about EWTN. Many conservative critics of NCR have thought we should be shut down because of our deviations from orthodoxy. But, so far as I know, no one at NCR has ever written an unorthodox opinion out of hatefulness. Even those who do not concur with the church's opposition to abortion write from a commitment to women. I think they are wrong, that a commitment to women can find more humane responses to unwanted pregnancies than the violence of abortion, but the people who think otherwise are not hateful.

Arroyo's show is hateful. It should be pulled off the air or he should be sent to FOX News where he belongs. In the meantime, hundreds of thousands of Catholics think he speaks for the church. His show is a scandal in both the generic and theological sense of the word.