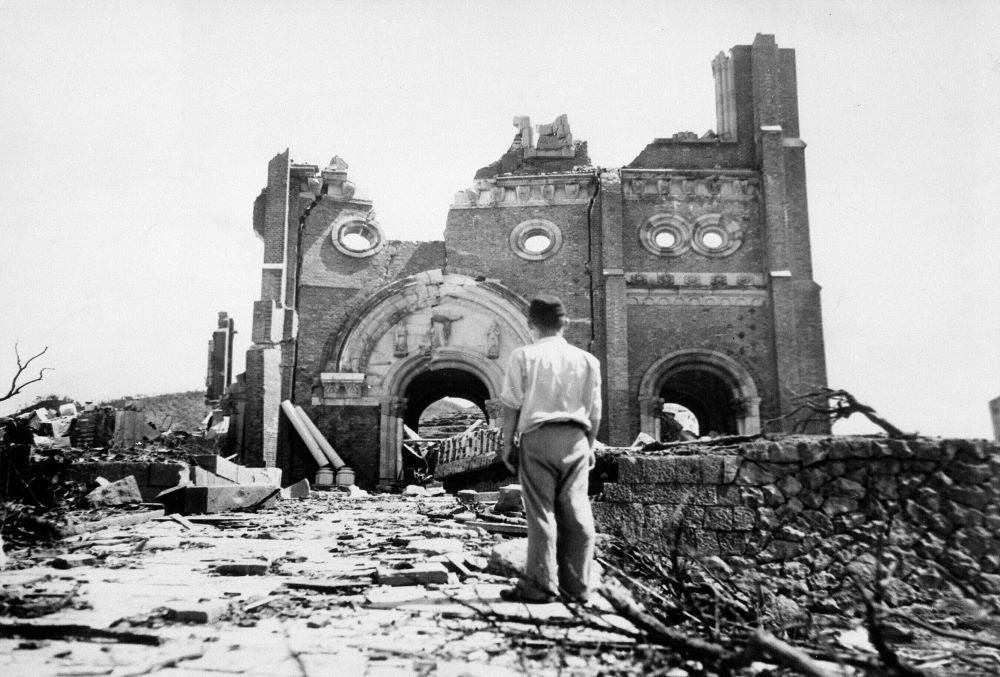 Partial walls of the Urakami Catholic Cathedral in Nagasaki, Japan, stand amid rubble a month after the U.S. detonated an atomic bomb Aug. 9, 1945. (AP/Stanley Troutman)

Santa Fe, New Mexico, Archbishop John Wester has issued a pastoral letter, "Living in the Light of Christ's Peace: A Conversation Toward Nuclear Disarmament." I tend to have minor points of dissent from church teaching in this area, but Wester's pastoral letter is so well done, it makes those of us schooled in realpolitik think twice. And, as important as the content of the letter is, it is Wester's style of teaching that really stands out.

Wester begins by recalling his visit to Hiroshima and Nagasaki, and how it affected him personally. He relates how that visit also changed the way he felt when he revisited New Mexico's nuclear weapons sites. The bombs that dropped on those Japanese cities were fashioned at the Los Alamos National Laboratory, not too far from the Cathedral of Saint Francis of Assisi in Santa Fe. This intensely personal beginning makes the entire text more inviting and engaging, more dialogical.

Indeed, one of the characteristics of this pastoral letter that is most striking is that it is a teaching document that seems suited to a synodal church. By that, I mean that the archbishop does not relinquish his job of teaching, but offers the instruction in the form of an invitation to mutual reflection and conversation. As you read the document, there are times that invite an "amen" but there are even more times that the invitation is to join a conversation the archbishop is trying to start, to discern with him and with others, what the Lord is calling us to do.

No bishop needs to start this conversation from scratch and Wester does a fine job offering a historical survey of magisterial teaching on the subject of nuclear weapons. One of the threads that emerges from Wester's survey of texts that is worthy of special mention is the fact that resources spent on weapons are, in a sense, taken from the poor whose material needs go unmet. From Pope St. John XXIII's 1963 encyclical Pacem in terris through the Second Vatican Council's Gaudium et spes and the U.S. bishops' 1983 pastoral letter "The Challenge of Peace" to Pope Francis' 2020 encyclical Fratelli tutti, the magisterium consistently urges nations to divert money currently spent on weaponry to meeting the needs of the poor and sources of social unrest.

"With the money spent on weapons and other military expenditures, let us establish a global fund that can finally put an end to hunger and favor development in the most impoverished countries," is the call Francis made and Wester reiterates.

Later in the letter, Wester points to a key problem in trying to scale back spending on nuclear armaments.

"The New Mexico congressional delegation has historically supported the nuclear weapons industry in large part because of the direct and indirect jobs it produces," he writes. "Yet the Land of Enchantment always ranks near the bottom of all 50 states in key socioeconomic indicators. Does the nuclear weapons industry really benefit New Mexicans as a whole rather than a privileged few? The evidence indicates no."

The military-industrial complex is not led by stupid people. They have distributed the tasks of making various components of modern weaponry throughout the country so that members of Congress will support continued funding for the programs. As the University of Washington's Rebecca Thorpe pointed out at The Conversation: "Defense manufacturers and subcontractors for each weapons system deliberately distribute defense dollars across as many congressional districts as possible, specifically targeting defense industries in more remote, rural areas that are inordinately reliant on the defense dollars that they receive."

So, just as complaining about the environmental dangers of burning coal will do nothing to persuade congresspeople from districts that rely on coal-related jobs unless there is a plan to find good paying jobs for the displaced coal workers, the conversation Wester wants to start must include plans to find equivalent jobs for those who are currently employed making weaponry.

In the final section of the text, Wester turns his attention to this precise issue, and frames it specifically around the nuclear facilities in New Mexico:

In the long term, nonmilitary jobs have greater potential for spurring growth. You build a bomb so that it will not be used. You build almost anything else, and its use will bring on additional innovation.

The conversation Wester wants to start must include plans to find equivalent jobs for those who are currently employed making weaponry.

Another fine section comes when Wester pivots to Francis' teaching on nonviolence, made most explicitly in the 2017 World Day of Peace message, the 50th anniversary of such papal messages. And Wester offers his own profound reflections on Jesus' example and teaching of nonviolence. He notes that in the Gospel of Luke, Chapter 9, shortly after Jesus tells the disciples they must love their enemies, the disciples ask if they should call down hellfire on some Samaritans who refused to welcome the Jesus. Not for the first or last time, the cluelessness of the disciples stands out. Wester writes:

Jesus rebuked the disciples because they wanted to call down fire from heaven. He absolutely forbids even the thought of it. He rejects violence of all kinds, including retaliation and warfare. He will not tolerate it among His followers. Jesus wants us to be as nonviolent and loving as He is, come what may. We are not allowed to kill people.

And he points out that in New Mexico, 2,000 years later, "we not only want to call down hellfire from heaven, but we have also actually built the most destructive weapons in history to do it, and then we used them to kill hundreds of thousands of sisters and brothers in Hiroshima and Nagasaki."

The only section of the text that is problematic is when Wester, having noted there is widespread debate among historians about the motives for dropping atomic bombs on Japan, cites only Gar Alperovitz and other, unnamed revisionist historians to the effect that the bombs were not necessary to end the war. "Instead, some historians now claim the U.S. dropped these weapons of mass destruction on Hiroshima and Nagasaki not to end the war, but to prove to the Soviets that the United States was militarily superior, thus beginning the nuclear arms race," Wester writes. That is a simplistic reading of the moral stakes involved.

President Harry Truman knew that the Germans had not surrendered until their land was almost completely conquered. He knew that Japanese soldiers, and many civilians, had fought to the death in the island war that led the U.S military to the gates of the Japanese home islands. Truman would have remembered that earlier that year, in February, the U.S. had firebombed Dresden, killing tens of thousands of people with nonnuclear bombs. And he would have known that a Cold War with the Soviets had, in effect, already begun: Stalin's duplicitous behavior during the Warsaw Uprising demonstrated that.

In the afterlight, it is easy to see why atomic weapons were and are qualitatively different from all other types of warfare, but it was not so easy to discern that difference in 1945.

Those who study issues of war and peace as practical matters should consider whether or not the obvious justice of the cause that led the U.S. to go to war in World War II, the jus ad bellum part of just war theory, was not so pronounced, it resulted in the Allies overlooking the vital, other half of just war theory, the jus in bello considerations that apply to the manner in which a war is fought. No matter how just the cause, the indiscriminate bombing of civilians is always morally wrong, but this was forgotten, somewhat willfully, during World War II. Why?

Still, while we want our politicians and our generals to practice such casuistry, we want our pastors to articulate the teachings of the church, which are always the stars to guide us. At a moment in history when fewer and fewer people look to the Catholic Church for moral leadership, Francis has proposed, and Wester now demonstrates, a teaching style that invites all Catholics, and others, to think through our human conundrums together, to think, and teach, and act as a synodal church.

Wester has enriched the church's magisterium on this still important subject of nuclear weapons and the fraught moral calculi they invite. His letter should be widely read and much imitated by his brother bishops.