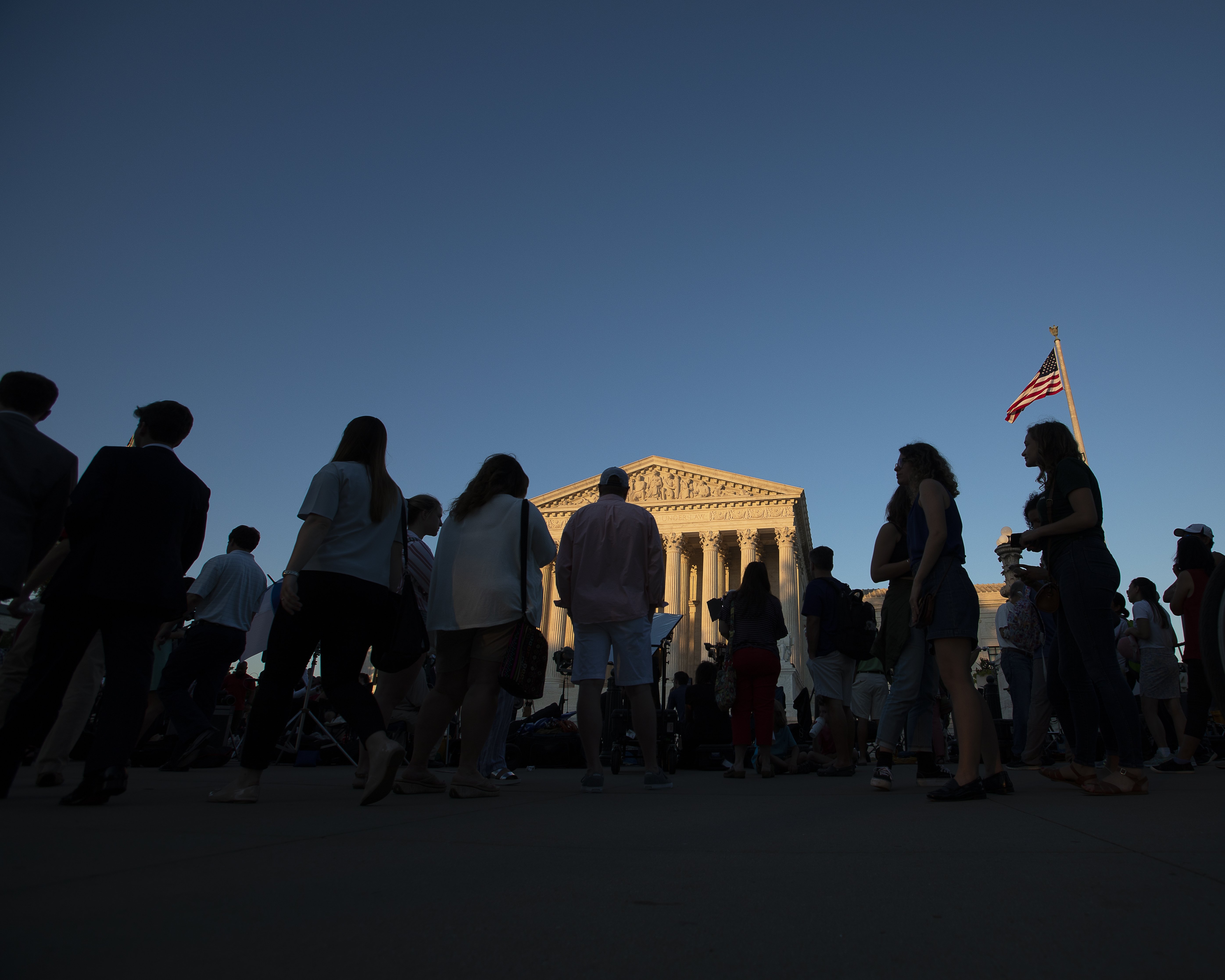 People are seen outside the U.S. Supreme Court July 9, 2018, in Washington. (CNS/Tyler Orsburn)

Recent events at the Supreme Court demand deep reflection on the language, moral frameworks and activism we engage in for safeguarding families and the rights of all people who can reproduce moving forward. On Monday, May 2, a leaked Supreme Court opinion, later confirmed as legitimate by Chief Justice John Roberts, revealed that the court is set to vote in favor of the state of Mississippi in the Dobbs v. Jackson case. Confirmation of this vote in the coming weeks will essentially reverse the federal protections over access to abortion services established in Roe v. Wade (1973) and Planned Parenthood v. Casey (1992).

This decision returns the legal question of abortion access to the states. Lawmakers in multiple states have already drawn up legislation that takes advantage of this upcoming decision to impose their own bans on all abortions performed, or in some cases as early as six weeks of pregnancy, most of them providing no exceptions for terminating pregnancies resulting from rape or incest. So far, there is no evidence that any of these bills contain the kinds of provisions that most Americans agree are needed to support healthy families, but especially to support persons who can get pregnant and the baby delivered, whether the birth parent and baby stay together or after a possible adoption.

Provisions that most folk on multiple sides of this issue (such as Charlie Camosy and Holly Taylor Coolman) can agree on include expanding access to essentials such as health care, food, housing, job training, transportation, child care and adoptions. I agree with disability advocate Madison Chastain that providing comprehensive sex education must also be included as a key strategy for reducing demand for abortions. To this expanding list I must add making contraception widely and freely available. I find this measure crucial even though it runs counter to Catholic teaching on sexuality. In some studies these last two measures together have been proven to reduce unwanted pregnancies by helping persons wait before engaging in sexual intercourse and avoid pregnancies altogether.

The overwhelming feeling of many pro-life feminists with respect to this possible ruling overturning Roe v. Wade is dread for people who can get pregnant and who will find themselves judged and criminalized for being unable to carry a pregnancy to term or whose situation represents a crisis of some sort. You don't have to be pro-choice to realize that what is coming at the state level is an onslaught of anti-woman legislation. This pro-life feminist asks you to stay awake and demand pro-woman legislation.

Compassion is not at the heart of any of these bills, regardless of their language arguing for the rights of the life in the womb. While I agree that human life in the womb is unique and essential for building the kingdom of God, I have argued elsewhere that we must understand crisis pregnancies from the perspective of women whose real material, spiritual and psychological loss make carrying a forced pregnancy to term a terrible moral tragedy.

In light of this, a post-Roe society asks pro-life Catholics that we reconsider how to engage perspectives that we have often avoided and attacked as contrary to Catholic teaching or scandalous to the faithful. Groups such as Feminists for Life and Black Lives Matter share the church’s concern for the integrity of families threatened by multiple forms of oppression such as mass incarceration and systemic poverty. Building broad coalitions of cooperation (reaching across ideological islands) is an essential step for providing for the safety and strength of all kinds of families — especially Black and brown families.

Many of the most vocal and staunch pro-choice lawmakers and activists agree that people who can become pregnant must be encouraged and assisted to promote their development and well-being beyond that needed to complete a pregnancy. Yet we shy away from collaborating with these movements and lawmakers for fear that such associations will send the wrong signal that we support their entire ideological platforms. We must begin to look at what kinds of alliances make for strong families in the many pockets of need and neglect at all levels of society. 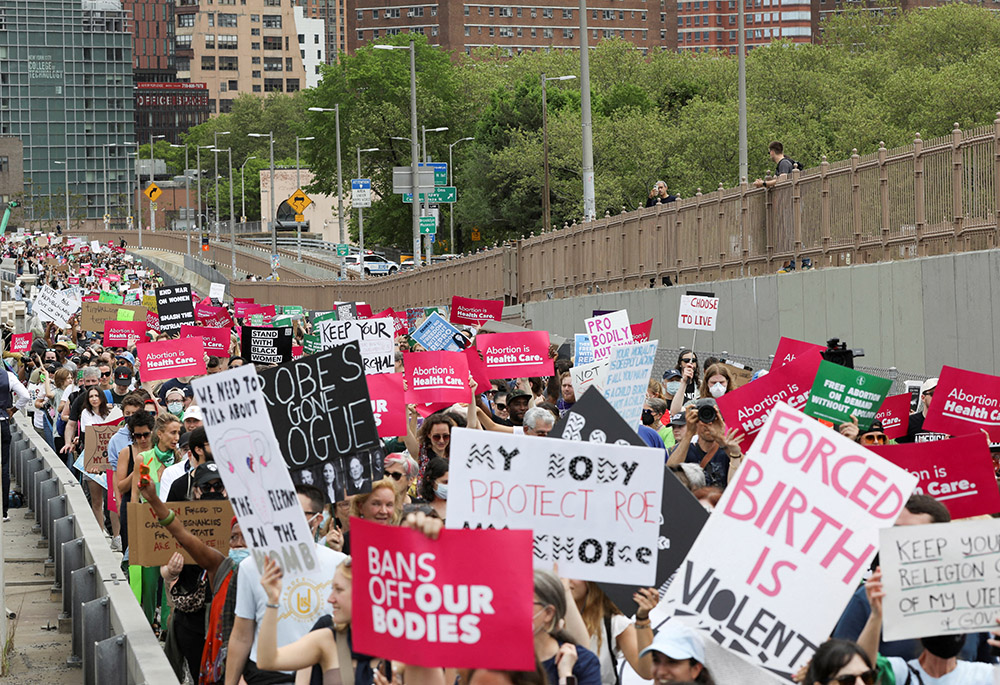 Abortion demonstrators are seen May 14 in the New York City borough of Brooklyn. (CNS/Reuters/Caitlin Ochs)

Engaging in these kinds of conversations and advocacy, hand in hand with others with whom we disagree on some essentials, might help us better see and therefore address perennial challenges that have eluded our social justice agendas and projects. In this we can turn to Pope Francis' invitation in Fratelli Tutti:

Social peace demands hard work, craftsmanship. It would be easier to keep freedoms and differences in check with cleverness and a few resources. But such a peace would be superficial and fragile, not the fruit of a culture of encounter that brings enduring stability. Integrating differences is a much more difficult and slow process, yet it is the guarantee of a genuine and lasting peace. That peace is not achieved by recourse only to those who are pure and untainted, since "even people who can be considered questionable on account of their errors have something to offer which cannot be overlooked." [Evangelii Gaudium, 236] … What is important is to create processes of encounter, processes that can build a people that can accept differences. Let us arm our children with the weapons of dialogue! Let us teach them to fight the good fight of the culture of encounter!

Pro-life Catholics and other groups must support strong networks of services for all people who can get pregnant and for all births when they occur. Especially in the United States, we must not wash our hands of the way we have been complicit in social and ideological trends that exalt the individual at the expense of strong community networks, many of which find expression in migrant, Black, Native American and other marginalized communities. These trends that present the family as the atomized set of parents and children living in isolation from other family and neighborhood relations — dynamics that violated Black family relations during slavery and other periods of urban redesign and suburbanization, for example — have greatly impacted the ability of persons to consider completing a pregnancy under harsh circumstances as altogether viable.

At this time, it also becomes even more imperative for us to dismantle rape culture and the patriarchal subjugation of persons of any gender. Abortion bans at the state level that do not recognize the violence of rape and other sexual violence are not compassionate, and need to be called out as such. The undeniable oversexualization and sexual violence targeted at persons who can get pregnant and other vulnerable genders has broad repercussions on the way that many feel about abortion access. Reducing the need for abortions depends on establishing a strong culture of sexual accountability, where people's boundaries and bodily integrity are respected and protected. Comprehensive sexual education includes sexual assault education and prevention, another reason why we must support these programs.

Engaging in these complicated projects will not be easy. Pro-life culture has traditionally avoided the kinds of broad collaborations called for here. In addition, they require that we wrestle with the messy moral burden of potentially promoting evidence-based methods of reducing unwanted pregnancies that disagree with Catholic sexual ethics. Yet, these difficult engagements are essential for promoting encounter, solidarity and life, instead of barreling further down the practices of indifference, disposability and death.

A version of this story appeared in the June 24-July 7, 2022 print issue under the headline: How to be pro-life and feminist.