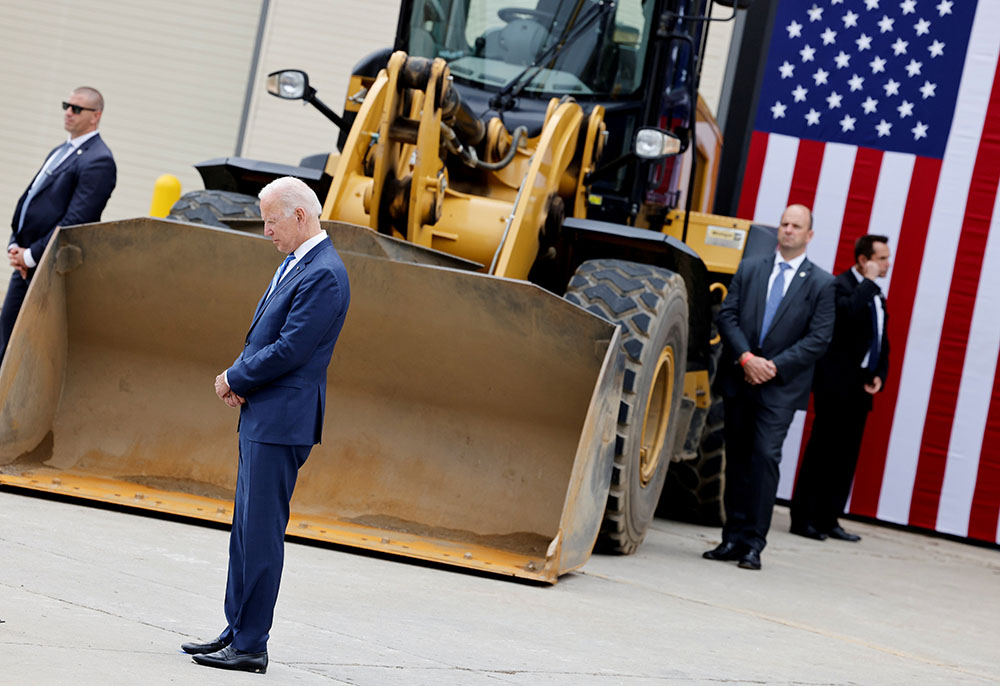 President Joe Biden is going to take his show on the road. Having finally secured passage of the bipartisan infrastructure bill, the sausage-making job is complete. But the job of selling the legislation has only begun. The American people need to see that what the president and the Congress accomplished is going to make a difference in their lives.

Infrastructure bills contain two sets of goodies, those that are immediate and those that are made possible with time. In the first batch, work on roads and bridges and rail lines and airports are, by definition, jobs that can't be outsourced. They are good paying blue-collar jobs. They are union jobs. And they should start hiring as soon as possible, at least with those projects that are shovel-ready.

The second batch of jobs are those that are made possible, or at least improved, because of the improvements in infrastructure. Small businesses of all kinds benefit when the roads that bring them supplies and customers are in good repair, and when improved public transportation gives suburbanites an alternative to commuter gridlock. Tourism thrives when intermodal transportation centers help people get from Point A to Point B.

Rural America is about to get a big boost. It is frustrating when the internet connection goes down in the middle of a Zoom meeting. That never happened when I lived in D.C., but it happens quite a bit out here in rural America. For those in rural America who aspire to jobs that depend on consistent, high-speed internet access, the infrastructure bill holds the promise of delivering that workplace necessity soon.

The Democratic National Committee, looking at the dismal performance of Democratic candidates in rural New Jersey and Virginia last week, should start planning online ads as high-speed cables are installed in those same rural areas. The party will need to do more to win back the trust of rural voters, but this is a big start.

The president did a local radio show in Cincinnati on Monday. Local TV and radio are key to the Democrats' ability to rebrand themselves. Ohio is one of the states that voted for Barack Obama twice and for Donald Trump twice. Trump won both times by eight points, although Biden did better in Hamilton County, where Cincinnati is located, than Hillary Clinton did. More importantly, Ohio may have one of the more competitive Senate races next year.

Another part of the base, young voters, should be engaged when celebrating those projects the bill funds that focus on combating climate change. According to Associated Press fact checkers, the president overstated the degree to which the bill's provisions related to electric vehicle charging stations will revolutionize the car industry, but it is a big step in the right direction, and makes additional right steps more likely.

Secretary of Transportation Pete Buttigieg, Commerce Secretary Gina Raimondo, Interior Secretary Deb Haaland, Energy Secretary Jennifer Granholm and Environmental Protection Agency Administrator Michael Regan are all slated to hit the road, visiting locations that will be receiving infusions of infrastructure funding. They, too, need to make the evening local news and do some local radio.

Faith leaders, especially those who work with the poor, applauded the bill's passage.

"The infrastructure act, with its focus on a clean environment, jobs, and expanded internet access, takes important steps toward making the economy work for everyone," said Dominican Sr. Donna Markham, president of Catholic Charities USA. "Many people Catholic Charities serves, such as senior citizens, persons with disabilities, and people living in rural areas, will experience a major improvement in their standard of living with access to telehealth and education programs through expanded broadband."

Eleven years ago, when Congress passed the Affordable Care Act, I called a friend who worked in the Obama administration and said, "Remember, the sales job starts now, it doesn't end." But the Affordable Care Act was enormously complex and many of the benefits did not take effect immediately. The Democrats running in the 2010 midterms listened to their pollsters who told them Obamacare was unpopular and advised them to talk about other issues. The Democrats got "shellacked," as Obama said. Biden knows not to make the same mistake this time.

Trump unsurprisingly attacked those Republicans who voted for the legislation. The man who promised that American blue-collar workers would be "forgotten no more" never got around to getting an infrastructure bill passed on his watch, so of course he had to pooh-pooh this one. It was as pathetic as it was predictable.

Biden did not run for president only as a modern Franklin Roosevelt (or as Santa Claus). He promised to reach across the aisle and bring new life to bipartisanship. It is vital that when he or a member of his administration hit the road, they invite those Republicans who voted for the law to join them at the ribbon-cutting ceremonies.

As a nation, we need to begin binding the wounds that afflict us, allowing them to turn into scars. We can never forget what Trump did to this country, and a scar is not a methodological forgetfulness. A scar is a wound that has healed, not disappeared.

Attention now turns to the Build Back Better bill, or the "soft infrastructure" legislation that has passed the House but is still being worked on in the Senate. It will not contain everything any particular senator or interest group would want, but will also be a step, a big step, in the right direction.

Democrats will need to do more than pass these two bills if they are to avoid another shellacking in next year's midterms, but passing these laws is the sine qua non of their midterm strategy. They need to be able to go to the voters and say: "Do you like that new bridge?" "Do you like that high-speed internet?" "Do you like the affordable child care?"

People like it when government works well. It won't keep the culture wars or the COVID-19 virus at bay, and the Democrats need a strategy to combat both, but a win is a win is a win, and Biden deserves credit for getting this infrastructure bill across the finish line.