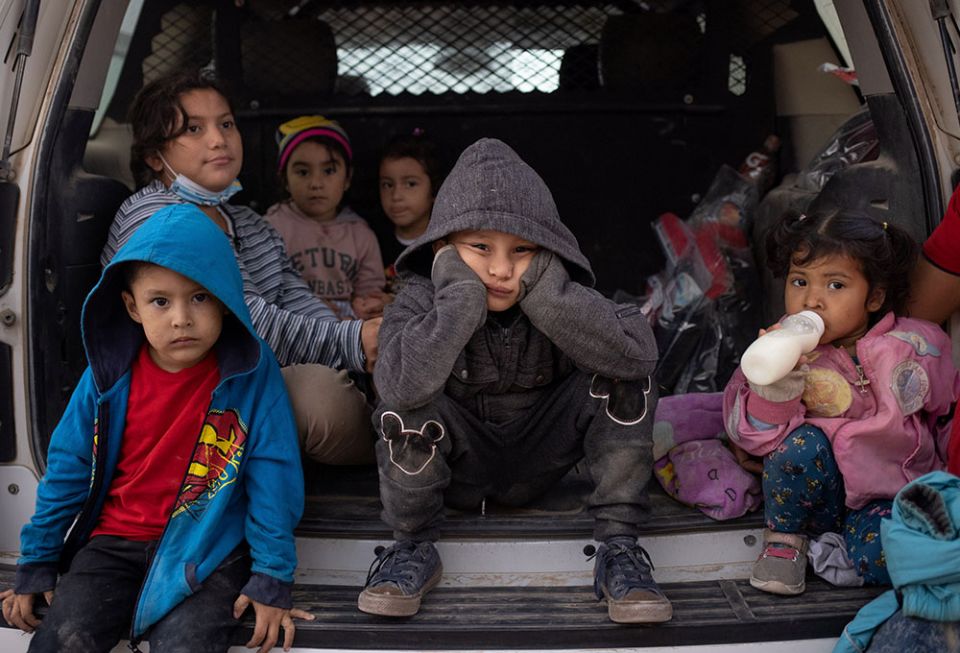 Migrant children from Central America take refuge from the rain in the back of a U.S. Border Patrol vehicle in Penitas, Texas, March 14, as they await to be transported after crossing the Rio Grande into the United States. (CNS/Reuters/Adrees Latif)

Immediately following his election in November 2020, then-President-elect Joe Biden said to Jesuit Refugee Service in a public forum that he would raise the refugee ceiling — the number of refugees resettled in the United States each year — to 125,000, a huge increase from the historically low figure of 15,000 set by President Donald Trump in his last year in office. Immigration and refugee advocates applauded the announcement.

On April 16, President Biden shockingly signed a memorandum that kept the number for fiscal year 2021 at 15,000 set by Trump, sparking a backlash from members of his own party and advocates. Within hours, the administration backtracked and stated that a revised refugee number, presumably much higher than 15,000, would be announced in mid-May.

What happened between November, when the president committed to 125,000, and now? Simply put, reality set in, as the administration has begun to realize the political and operational challenges of managing migration to the United States.

More than 18,000 unaccompanied children who have arrived at the southern border were in federal custody at the end of March, a result of the Biden administration's decision to waive for these children a COVID-19 health ban put in by the Trump administration. Single adults and families are still subject to the ban.

The rise in child arrivals has caused the administration to direct resources and political energy toward the border, with immigration opponents taking the opportunity to criticize the administration for the influx. While early public opinion polls show strong support for the president, he has received lower marks on how he has managed the border and immigration overall.

To compound matters, the administration's immigration legislative agenda, including a comprehensive immigration bill the president announced on his first day, has stalled, as the border situation has weakened support for any immigration legislation in a closely divided Congress. One key Republican, the DREAM Act co-sponsor Lindsey Graham (R-South Carolina), has cited the border issue as justification to retreat from a bipartisan immigration effort.

While not admitting it, the president's decision to stick to the 15,000 cap was made, in part, to halt — or at least limit — the political perception that the administration was veering too far left on immigration.

But the decision underestimated the reaction from fellow Democrats and immigration supporters, including Catholic advocates, who have worked hard over many years to protect the rights of refugees and immigrants. To use a tennis term, it was a political unforced error.

The president also wrongly conflated unaccompanied children at the border with refugees entering through the U.S. refugee program — two distinct groups with two different funding streams. By his own admission, he made the decision to buy time in order to address the situation with children at the border.

Trouble is, the refugees overseas who have waited for years for resettlement to the U.S. do not have the luxury of time, as they remain in dangerous situations. As we have in the past, our nation can assist both groups at the same time.

In fairness, the decision reveals the difficulty faced by the new president — and by many of his predecessors — in navigating the complex political terrain of the immigration issue.

Events that are often out of the control of a president — from a primary election outcome to an increase in spring border arrivals — can derail positive policies. Over the years, the issue has become so polarized and politicized that it has become increasingly difficult to make progress in reforming the system.

What is the path forward? The president should learn from his error and continue to lean into positive immigration and refugee policy. Public opinion is behind him, as the American public, including Catholics, supports positive reform of the immigration system.

The president will eventually restore U.S. leadership in refugee resettlement and set a refugee ceiling of 125,000, as he promised in his November pledge to Jesuit Refugee Service. Given the realities of the migration issue, however, it may take longer than expected.