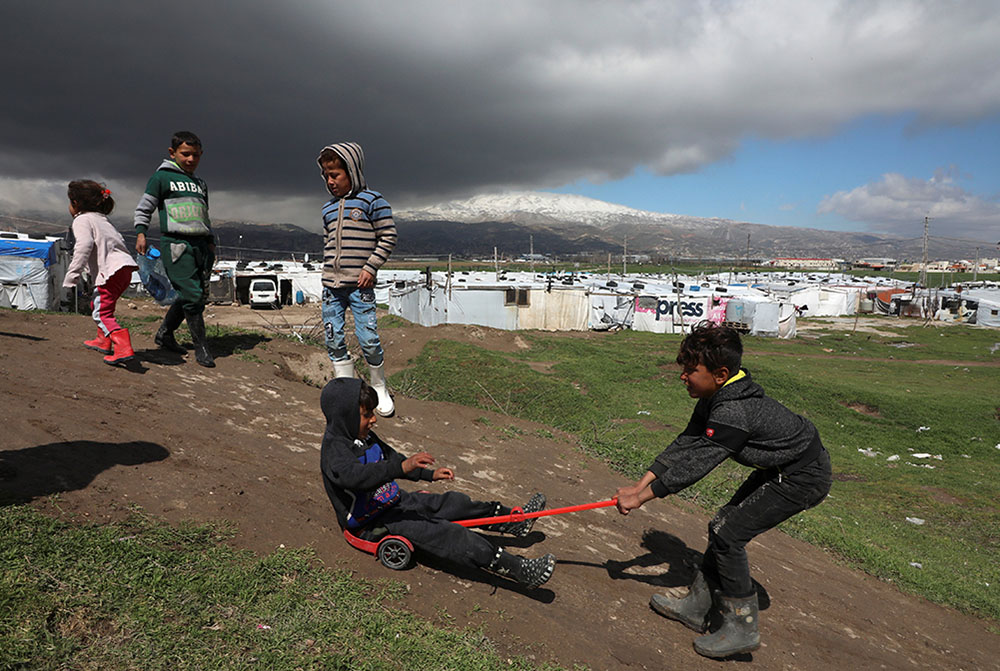 Syrian refugee children play together at an informal tent settlement in the Bekaa Valley in Lebanon March 12. (CNS/Reuters/Mohamed Azakir)

Catholic refugee resettlement groups hoped that on day one in office, President Joe Biden would sign an authorization officially increasing the number of refugees allowed into the United States. Eighty-six days later, they're still waiting.

"During the campaign and during his first few weeks in office, President Biden really promised to welcome more refugees into the country and to restore the global leadership role that the U.S. has played in terms of resettlement," Rachel Pollock, director of resettlement services for the U.S. Conference of Catholic Bishops, told NCR.

"All of the early warning signs were good," says Pollock, who admits she's now puzzled. "For the past two months we haven't seen any movement and we're just waiting on the president's signature to move forward."

On Feb. 4, Biden signed an executive order aimed at building back the U.S. refugee resettlement program in an effort to "help meet the unprecedented global need” and "rebuild what has been so badly damaged" following the Trump administration. On Feb. 12, the Biden administration issued an emergency report to Congress outlining a way forward, including accepting 62,500 refugees during the remainder of 2021.

Many refugee advocates believed things were turning a corner after four years of draconian cutbacks under President Donald Trump. They now find themselves frustrated that two months later Biden has yet to resubmit what is known as a "presidential determination" to Congress, which is the statutory requirement needed to increase the ceiling for refugees for the fiscal year.

As such, a report issued earlier this month by the International Rescue Committee concludes that, at the halfway point of the 2021 fiscal year, only 2,050 refugees have been admitted to the United States, which marks a new historical low.

Just days after the 2020 election, Biden spoke at a virtual event for one of the Catholic Church's leading refugee support organizations to declare for the first time as president-elect that he would raise the annual admission target to 125,000. The new target marked a sharp increase from the Trump administration's cap of 15,000 individuals.

"A Biden-Harris administration will restore America's historic role in protecting the vulnerable and defending the rights of refugees everywhere," he told attendees at the 40th anniversary celebration for Jesuit Refugee Service/USA. Established in 1980 as an initiative of the Society of Jesus, the organization works around the globe to aid and advocate on behalf of refugees and other forcibly displaced persons.

Jesuit Refugee Service Executive Director Joan Rosenhauer told NCR that she and her colleagues were delighted with Biden's pledge and early commitment to refugees but now find themselves "very disappointed that he has not taken the steps he needs to this year."

The delay, says Rosenhauer, is leading to "devastating consequences for refugee families around the world."

According to the United Nations, there are nearly 80 million displaced people in the world, almost 30 million of whom are refugees. Included in that number are 1.4 million in need of resettlement.

"Less than 1% of refugees are resettled under normal circumstances," Rosenhauer noted, adding that the impact of the Biden administration's inaction will be "really dire," including for families that are already in the United States waiting for their loved ones to join them.

In January, the CEO of Catholic Charities of Dallas, Dave Woodyard, told NCR there was "an eagerness to welcome new arrivals again" among Catholic resettlement groups, including his own, on the eve of a new administration.

Now, a state of paralysis and uncertainty has set in.

Pollock said that organizations such as Catholic Charities of Dallas and other agencies she works with remain "very eager to rebuild the programs and resettle refugees," but she added that "the confusion I feel is now rippling through the networks that are eager to get to work." 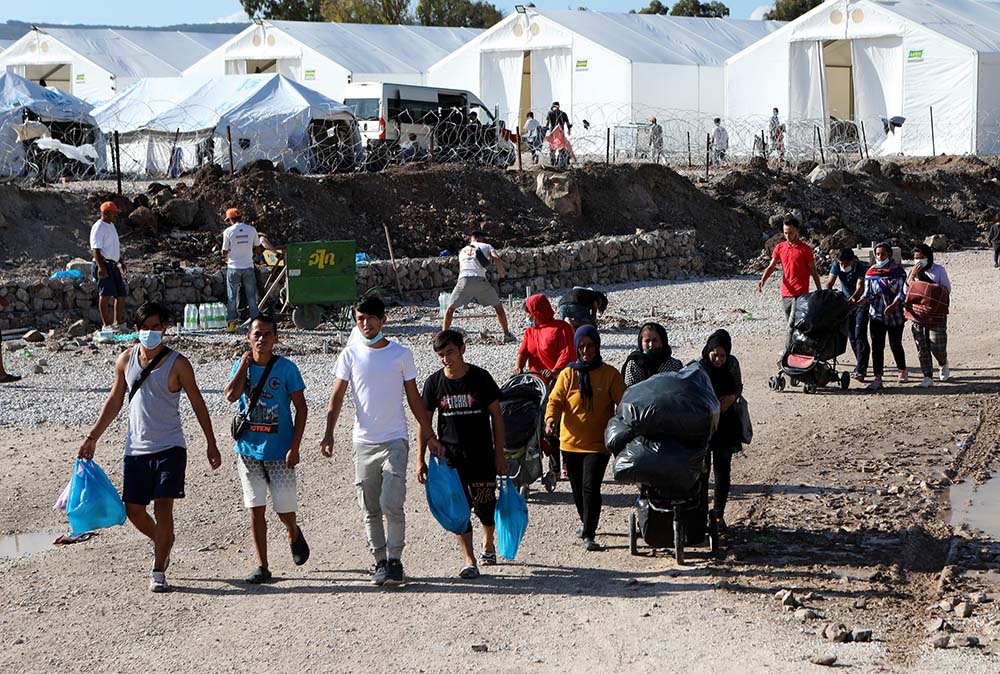 Migrants walk with their belongings as they make their way to the Kara Tepe refugee camp on the Greek island of Lesbos Oct. 14, 2020. (CNS/Reuters/Elias Marcou)

Both Pollock and Rosenhauer pointed to the recent spate of canceled flights of more than 700 refugees who were slated to arrive in the United States but are now in a state of limbo until Biden takes out his pen and signs the presidential determination.

According to Rosenhauer, more than 35,000 refugees have been approved by the U.S. government to be resettled through a rigorous vetting process, but the delay could lead to an expiration of their medical and security screenings.

On April 15, 100 representatives of Jesuit Refugee Service/USA from 25 states held virtual meetings with Congress, urging action on the Guaranteed Refugee Admissions Ceiling Enhancement (GRACE) Act, which would require any U.S. president to set the minimum for refugees at 125,000.

Rosenhauer said this would offer "a more consistent and robust future for refugees."

In addition to congressional advocacy, Jesuit Refugee Service/USA will continue to keep pressure on the executive branch of government and will encourage those awaiting action to continue the process of vetting and to "keep the hope alive," she said.

Despite the frustration, she said reasons for optimism remain.

Earlier this month, Biden released his preliminary discretionary budget, which included $10 billion in humanitarian assistance for refugees, victims of conflict and displaced persons, along with $4.3 billion for the Office of Refugee Resettlement in order to rebuild its capacity.

"There's significant movement in the right direction for longer-term progress," said Rosenhauer. "But it's the immediate progress we need now."