In bone-chilling numbers, femicides in Mexico are a national emergency 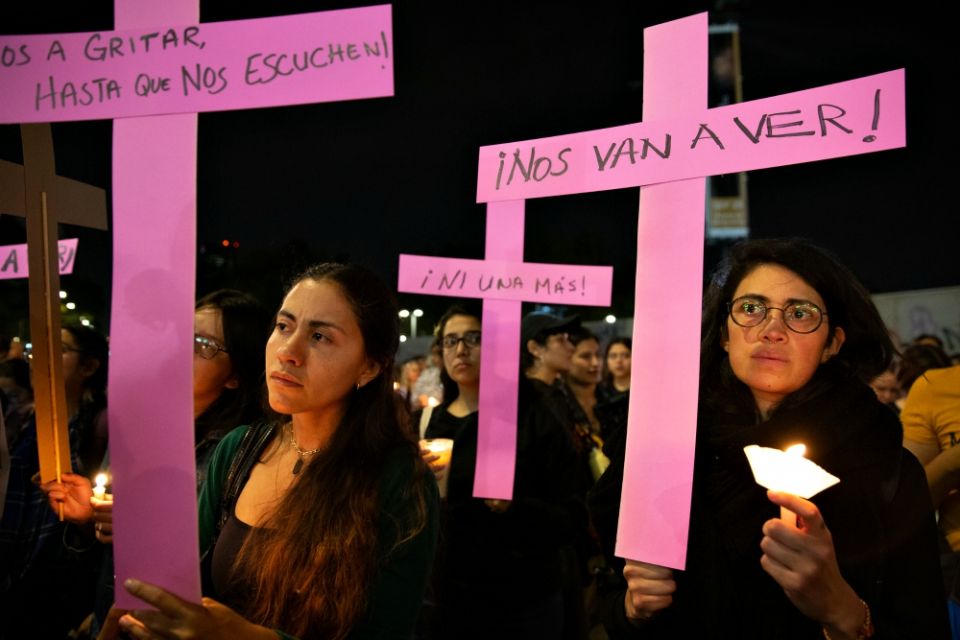 Demonstrators protest femicide and violence against women, in Mexico City Nov. 25, 2019, on the International Day for the Elimination of Violence Against Women. (Newscom/Sipa USA/Benedicte Desrus)

On Feb. 9, 25-year-old Ingrid Escamilla was stabbed to death, skinned and disemboweled by her boyfriend in Mexico City. And while local media has been consumed with the gruesome details of Escamilla's brutal killing, that wasn't the only femicide committed in the country that day.

In another high-profile femicide on Nov. 25 of last year, on the International Day for the Elimination of Violence Against Women, Abril Pérez Sagaón was shot to death in her car in front of her two teenage children. Her husband and former head of Amazon Mexico, Juan Carlos García, is suspected of hiring the assassin.

García had been arrested for beating her with a bat and had been held in pretrial detention for 10 months, but was released early after Judge Federico Mosco González downgraded the charge of attempted femicide to a domestic violence charge. The judge argued that if her husband had wanted to kill her, he could have because she was sleeping when he began beating her with a bat.

For years, bishops and priests have spoken out in response to the alarming number of femicides in the country — a crime that is generally defined as the "killing of females by males because they are female." In December of last year, human rights activist Fr. Alejandro Solalinde apologized to Mexican women who have suffered "discrimination, mistreatment or have been killed." He also apologized for the Catholic Church, "which has been the one that has transmitted patriarchal, macho prejudices."

The progressive group Católicas México for the Right to Decide has also denounced the number of femicides in the country on their Twitter account on a regular basis. 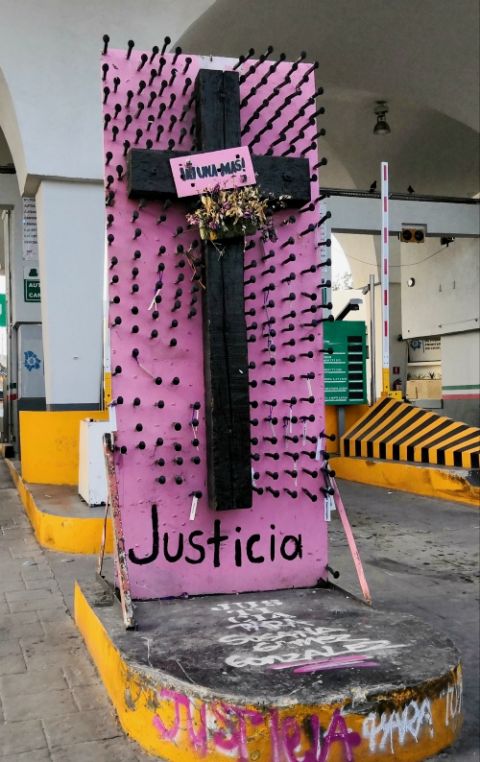 A cross meant to draw attention to the problem of femicide is seen at the Paso del Norte International Bridge, Ciudad Juárez, Mexico, April 6, 2019. (Wikimedia Commons/Wotancito)

Official figures show that 3,142 women and girls were killed in 2019, and only 726 of those cases are being investigated as femicides. But women's rights activists say that number is way too low. Frida Guerrera, an activist who has dedicated years to chronicling femicides in Mexico, has documented 237 femicides from Jan. 1 to Feb. 9 in 2020 alone. The numbers are bone-chilling and she herself has received death threats for her work.

I asked Cristina Reyes, an attorney with the organization Mexico United Against Delinquency, about the alarming number of femicides. She told me, "There has been no real institutional will to investigate femicides on behalf of the state or federal government."

She went on to say, "We need a diagnosis of the real situation: the capacity of the institutions of the prosecutor's offices and the police because they are the first points of contact for femicides. ... We need continuous trainings and a serious analysis about the impunity. Only with these things can the situation improve."

Tania Reneaum, executive director of Amnesty International Mexico, echoed Reyes's statement and explained to me, "What is indispensable is to have the specialized prosecutors; offices endowed with resources: financial resources, scientific resources, technicians, and trained judges who have this specialty."

What's in a name?

The current administration under president Andrés Manuel López Obrador is trying to figure how to deal with what Guerrera aptly calls a "national emergency."

The federal government's head prosecutor, Alejandro Gertz, proposed changing the way femicides are classified by creating a kind of uniform penal code for states and the federal government that he says would "simplify" criminal investigations and prosecutions by absorbing infanticide and femicide into the general definition of homicide, while providing a penalty of 40-60 years in prison.

But in law, words matter a lot. The secretary of interior and an ex-Supreme Court judge, Olga Sánchez Cordero, has said she's personally opposed to doing away with femicide as a crime unto itself. She has also said that such a move would be in violation of Mexico's obligations under the Inter-American Convention on the Prevention, Punishment, and Eradication of Violence against Women, known as the Convention of Belém do Pará, as well as the Convention on the Elimination of All Forms of Discrimination Against Women (CEDAW).

Reneaum at Amnesty International Mexico told me, "The government wants to solve the problem of femicides with criminal law. But that ignores important legal obligations like the 2009 Inter-American Court of Human Rights' ruling on the case Campo Algodonero, where the Mexican state was required to take active measures to prevent gender-based violence. ... When we reduce the problem to just the penal system, the collective understanding of the problem is also reduced."

She went on to explain, "We live in a society where a social acceptance of violence against women is normalized."

Violence against women isn't limited to Mexico. According to the United Nations, a third of all women and girls experience physical or sexual violence in their lifetime, and half of women killed worldwide were killed by their partners or family. According to UN Women, some national studies show that up to 70% of women have experienced abuse by an intimate partner at some point in their lives.

Domestic violence regularly goes underreported because victims hesitate to contact the authorities for fear of retaliation from their batterer, a belief that police won't help, and/or the idea that family problems, including violence, should be addressed privately. Non-white and immigrant communities are even less likely to report abuse because they may view the police and the courts as oppressive, rather than protective institutions.

If you want to help activists like Frida Guerrera, Cristina Reyes or Tania Reneaum, you can donate to their organizations and help continue to fund the critical preventative and investigative work these women are doing.

I leave you with the words of the feminist intervention of Colectivo LasTesis:

The patriarchy is a judge who tries us for being born and our punishment is the violence you see now.
It's femicide, impunity for my murderer, it's disappearance, it's rape.
And it wasn't my fault, not where I was, nor how I was dressed.
You are the rapist; you are the rapist.
It's the police, the judges, the state, the president.
The oppressive state is a macho rapist.

[Carli Pierson is an international attorney and translator.]

Commentary | In bone-chilling numbers, femicides in Mexico are a national emergency