The Capitol riot was an attempt to lynch our democracy 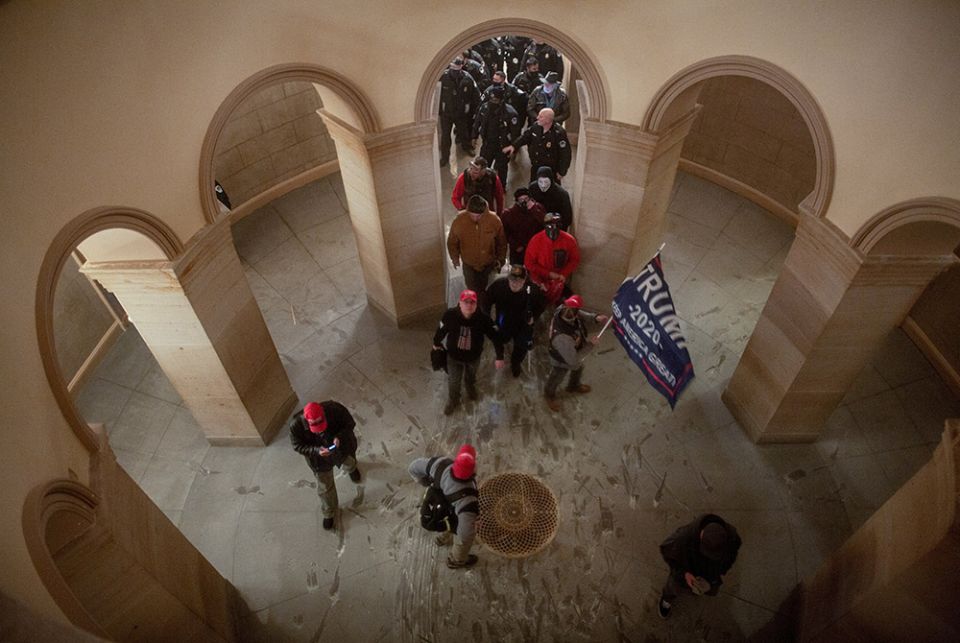 Supporters of President Donald Trump storm the U.S. Capitol in Washington Jan. 6, after a rally to contest the certification of the 2020 presidential election. (CNS/Ahmed Gaber, Reuters)

Trump soothed and encouraged his insurrectionists with a blasphemous message pretending that lies are love and violence is support. He incited insurrection not only against the United States but most blatantly against justice and truth. Some church leaders roundly condemned the violence at the U.S. Capitol. Others called for the president's resignation. I joined them. But we must also be very clear about the nature of the events last month. The Capitol insurrection was an attempt to lynch our democracy. I don't use that language lightly. Let me explain.

Of the many weapons in the toolkit of a group whose power is slipping, lynching is the most abhorrent. Emerging videos from the Capitol insurrection show a mob set for lynching. As a rough gallows was built by the rioters, others chanted, "Hang Mike Pence!" and they hunted for the vice president, for Nancy Pelosi, and for other lawmakers as well.

Jesse Wegman's Jan. 17 commentary in The New York Times stopped just short of saying this was a lynching. Still, he noted these elements: the "violent ransacking of the Capitol by an overwhelmingly white mob," a now "literal" assault on "the ideal of a multiracial democracy," the mob's "eagerness to destroy American democracy," and the rioters as "inheritors of a long tradition of rebellion against a new world order."

Jan. 6 was the political lynching of our multiracial democracy. It was all too close to being a successful lynching of others who did not support the Trump world order. 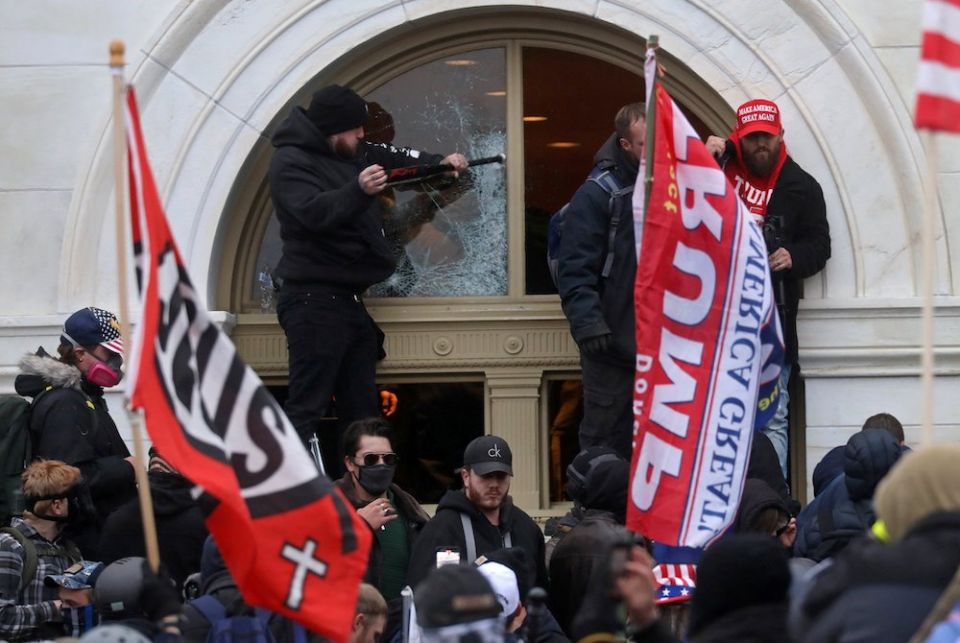 James Cone's powerful 2011 book, The Cross and the Lynching Tree, links lynching — a violent assertion of white supremacy — with Christ's crucifixion. He notes that mob torture of Black men and women was "the only way a community [who felt it was losing its supremacy] could protect itself from bad people [who were] out of reach of the law." Cone recalls "primal memories of terror and violence that were part of the reality of growing up in the Jim Crow South."

Lynching was a terror so profound that Black people could not speak of it, could not even think of it. Lynching was a torture reserved as punishment for enslaved people who rebelled against their captivity and exploitation, such as Nat Turner and Denmark Vesey.

After losing the Civil War, white southerners continued to wage "the struggle to define America as a white nation and blacks as a subordinate race unfit for governing and therefore incapable of political and social equality." Lynching not only punished specific real or imagined offenses against white rule, but served as a threat to keep Blacks subjugated. Lynchings "could not have happened without widespread knowledge and the explicit sanction of local and state authorities and with tacit approval from the federal government, members of the white media, churches and universities."

As Supreme Court Justice Roger B. Taney decreed in the chilling words of the 1857 Dred Scott decision: "[Blacks] had no rights which the white man was bound to respect." Jim Crow ended with the civil rights movement, but lynching continues in our era, with unchecked police brutality against Black people, including Tamir Rice, Breonna Taylor, George Floyd and countless others. 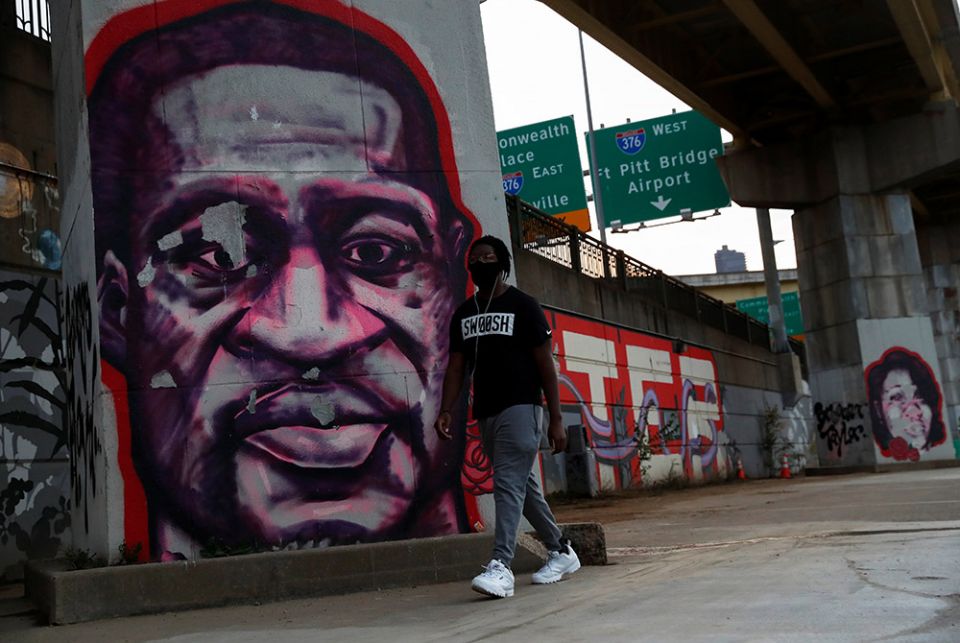 Turning to Jesus' crucifixion, here is the connection. We read in Luke's Gospel that Jesus declared that God has anointed him to comfort the poor, liberate captives, heal the blind and emancipate the oppressed (Luke: 4:18). Like Isaiah and the great Hebrew prophets, Jesus proclaimed God’s love for the people and God’s expectation that they would govern their community justly. Defying the power of the Roman government and the religious power of the Temple priesthood, Jesus initiated a new community based on inclusivity, generosity and compassion.

His crucifixion, like all lynchings, served as his punishment and as a threat to others who might challenge Roman rule. Black Christians in the United States know that Jesus is Black because, like themselves, he was a member of the oppressed class on the margin of society, subject to the arbitrary and brutal whims of the powerful. In that reasoning, white Christians are like the Romans and the Temple priesthood, when they use actual or borrowed state power and torture to maintain their dominance.

Howard Thurman provides more clarity as when he describes Jesus as a Jew living in a backwater of the Roman Empire, a landless day laborer, swept up in the political and religious strife that had swirled in Palestine since time immemorial (Jesus and the Disinherited, 1996).

Jesus was caught between living faithfully according to God’s commandment of love on the one hand, and acceding to power to save his own skin on the other. Thurman reasons to Jesus’ astonishing, wondrous conclusion: Complete commitment to the law of love, regardless of where it leads, is the only possible way to flourish as a human community.

Jesus gave his life as witness to this truth. Martin Luther King Jr. came to this same conclusion, and also died for it: "I am more convinced than ever before that [following the cross] is the power of God unto social and individual salvation" ("Pilgrimage to Nonviolence" in Strength To Love, 2010).

The Judeo-Christian tradition calls us to a stance of universal compassion and love. There are two great commandments: to love God and to love our neighbors. A nation founded on love and justice embraces and supports all its residents so that they may flourish. Justice, the twin of love, is never achieved through violence or lies.

I believe that our nation does stand at another revolutionary moment. At this crossroads now — as ever — we are called to yearn for justice with every fiber of our being. We must repudiate the order of white supremacy that has dominated our nation’s history. We must condemn the lynching of our multiracial democracy or any of its members.

Let us continue the work of equal justice as promised by our founders, keeping our hearts set on creating that ever-more perfect union of our hopes and dreams.

Commentary | The Capitol riot was an attempt to lynch our democracy