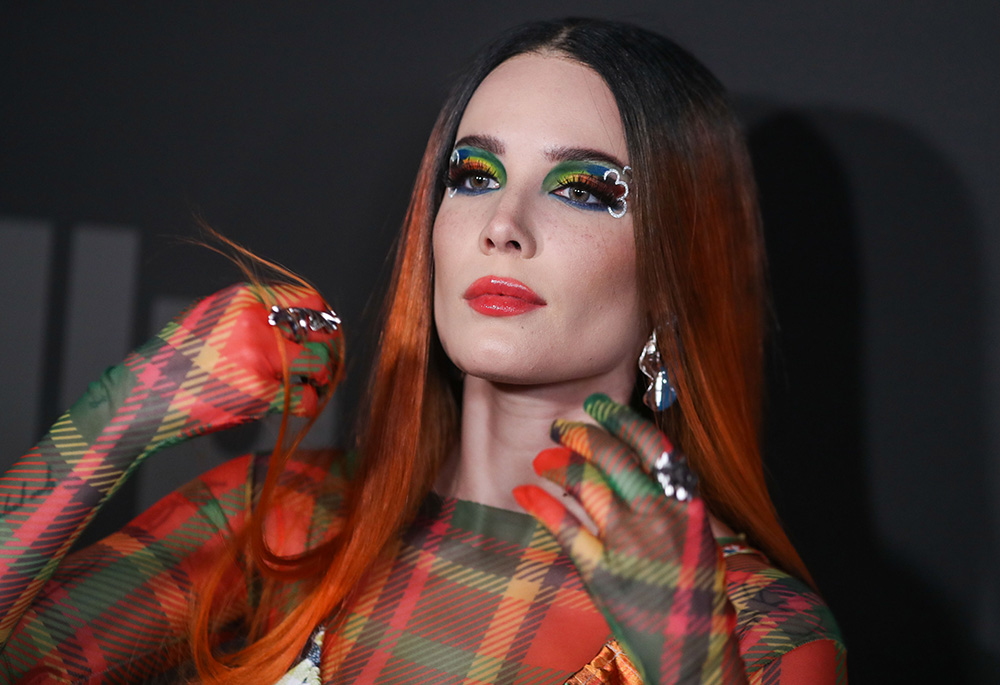 In Halsey's latest album, "If I Can't Have Love, I Want Power," the alternative electro-pop artist reflects on becoming a new parent and grapples with the experiences that go along with pregnancy, childbirth and parenthood.

Halsey's uninhibited, honest lyrics call to mind the trials and joys that many women experience in exploring their sexuality, maternity and identity. The album explores waves of self-empowerment, self-destruction and navigating the tightrope walk of the Madonna-whore complex and reconciles the images of womanhood and motherhood in their body as a bisexual person. Halsey has shared that their gender has been fluid and expressed that "the inclusion of 'they,' in addition to 'she,' feels most authentic to me."

For Catholics especially, much of the album will feel familiar. The cover art depicts Halsey — who was raised Catholic — holding her baby on her lap with one breast exposed and adorned like a queen, evoking the "Nursing Madonna" iconography, wearing Marian blue. The symbol of one breast fully exposed represents sexuality, fertility, maternity and functionality, all of which are interconnected. While some may criticize public breastfeeding and believe that exposed breasts are always indecent, many women often push back against the compartmentalization of female breasts as solely sexual objects. The art invites the listener to enhance or scandalize our own concepts of Mary.

"The Tradition," the first track on the album, focuses on the idea of women and femininity being commodified, consumed and objectified. The minor key and brooding, dark instrumentation present a somber, eerie tone as the introduction to the album. The lyrics of the refrain repeat:

In this track, Halsey evokes the themes of patriarchy, rape culture and the subjugation of women, which she continues to explore throughout the album. The listener is invited into a space of discernment, inviting us to reflect on and challenge norms around feminine traditions.

As the album progresses (links to some songs contain explicit lyrics), the production grows in intensity with up-tempo synths and percussion on "Bells in Santa Fe" and full, gritty, power-punk instrumentation on "Easier than Lying." Thematically, these tracks — along with "Lilith" — touch on mistrust, doubt, despair, compulsion and self-destruction through sexuality. In "Girl is a Gun," the artist intersperses maternal imagery with sexual imagery, forcing listeners to hold the tension of female sexuality, fertility and maternity all in one without compartmentalizing them.

In "Bells in Santa Fe," Halsey calls on Jesus at one point, offering, "I could keep your bed warm, otherwise I'm useless." This heartbreaking line conveys an internalized belief many women learn to carry that their only value, or at least their primary one, is in their sexuality; her experiences of commodification have corrupted even her image of Christ from being a savior to resembling just another man who might use her. She invites listeners to consider how often one might compartmentalize fertility and sexuality or see them as intrinsically interconnected. How we have acted out in self-destructive or self-sabotaging ways. How have we invited God into those places?

"You asked for this" explores the way that "womanhood" is glamorized and sold to young girls, but how upon reaching adolescence and adulthood, young women often undergo painful experiences of being objectified and harassed. Halsey reflects on how the getting what you thought you wanted doesn't always pan out, and how the desire to be perceived as a woman can become corrupted. The track paints the backstory for how self-destructive tendencies can emerge out of internalized misogyny, as well as how motherhood is often glorified, and yet in experiencing pregnancy and childbirth, many women experience complications and trauma. The song challenges listeners to reflect on the perceived gender norms we have embraced or rejected in our lives.

Then, the album has a total mood change in its central track, "Darling," which appears to be a dialogue between the singer and her inner voice (of either a higher power or loving parent), or perhaps between herself and her newborn child. The voice replies in the choruses: "Darling, don't you weep, there's a place for me." The voice urges the subject to "head fast toward the light" (a symbol for death and birth) and is the first glimmer of hope on the record. "1121" continues in this vein of progress toward healing by taking inventory, examining one's conscience and accepting responsibility, while it also explores the artist's excitement and fears around childbirth and pregnancy:

The song reveals the way that love for a newborn can completely rearrange one's sense of priorities and understanding of self-sacrifice. The abstraction again of who the lyrics are directed toward, lover or child, challenge the listener with concepts of love that can be healthy or unhealthy depending on context.

Lyrics video for "1121" by Halsey (YouTube/Halsey)

However, in "honey" and "Whispers," there is a relapse into seduction and compulsion, with Halsey confessing to indulging in coping behaviors to fill a void with explicit detail. The artist openly discusses how making this record was an exercise in risking being unlikable, and there is a certain dying to self in the record as the false idols of honor and esteem are no longer what matter. What is now important to Halsey is simply being honest and real.

The song "I am not a woman, I'm a god," though wittingly provocative in title, explores Halsey's own wonder and awe at the experience of pregnancy and gestating a human being, an experience for Halsey that transcended their experience of gender. Halsey acknowledged that though they have a fluid gender identity, the embodied experience of pregnancy forced them to hold the tension of bearing an image most associated with femininity and womanhood all while, within themself, Halsey's interior sense of gender felt more expansive. Halsey's wonder and awe of their pregnancy and describing it as being a "god", co-creating life with God in their body, invites us to reflect on pregnancy and femininity.

"The Lighthouse" and "Ya'aburnee," the album's final tracks, unpack the experience of hitting rock bottom and the humility that comes with it, while also exploring grief and loss. Halsey has been open about experiencing miscarriages and battling endometriosis, and is no stranger to grief. Yet in experiencing the life-giving power of pregnancy and childbirth, the evolution of Halsey's own understandings of love and power is reflected throughout the record.

While women often face judgment for being too sexual or not sexual enough, "If I Can't Have Love, I Want Power" provides a lens for compassion and understanding, for reexamination of the wounds that lead to harmful behaviors, as well as for the complexity and diversity of experiences women and nonbinary people have around sexuality, pregnancy and childbirth.

"If I Can't Have Love, I Want Power" explores the trials of seeking power over love and presents us with honest depictions of how authentic, integrated, self-giving love is truly the most powerful.

A version of this story appeared in the Feb 4-17, 2022 print issue under the headline: Halsey's latest album invites listeners to explore concepts of Mary.