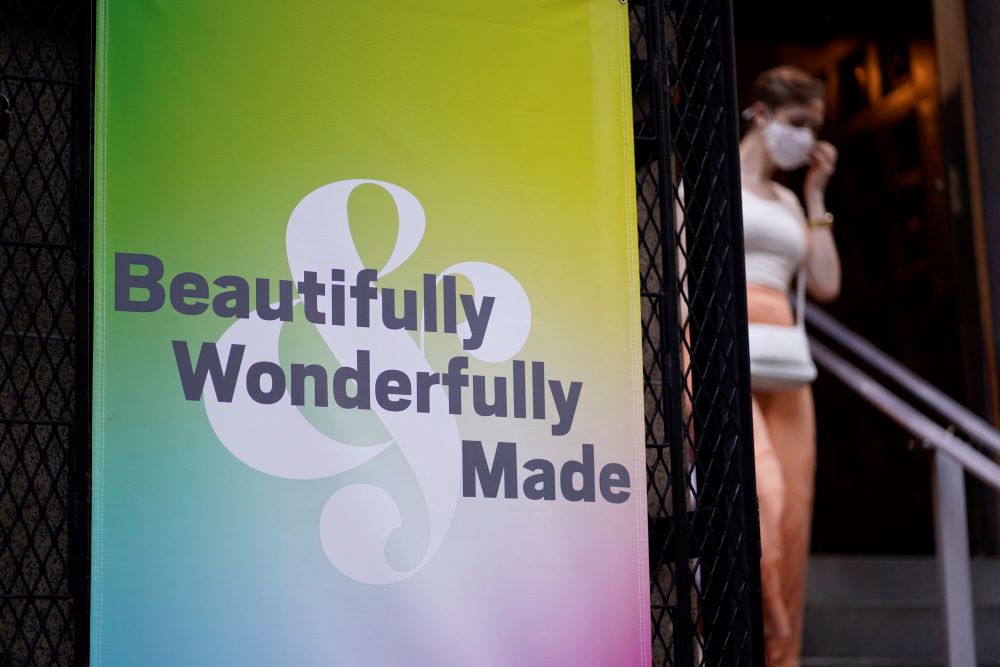 A banner hangs outside St. Francis of Assisi Church in New York City following an annual "Pre-Pride Festive Mass" June 26, 2021. The liturgy, hosted by the parish's LGBT Ministry, is traditionally celebrated on the eve of the city's Pride march for the LGBTQ+ community. (CNS/Gregory A. Shemitz)

Four summers ago, a few months after I first came out as queer, I moved to Boston and took the bus to a parish in Back Bay to attend Mass on my first Sunday there. In lieu of preaching on the Gospel or the readings, the priest chose to preach on the day's responsorial psalm: "I praise you, because I am wonderfully made" (Psalm 139).

I sat in the back and listened as he repeated the line over and over again in his homily, reminding the congregation that yes, we are wonderfully made, no matter our gender, race, age, or the gender we are romantically attracted to. He repeated that last line again. No matter your sexual orientation, or your gender identity, you are wonderfully made.

After Mass, only when I walked past the many shops adorned with rainbow flags did I realize that it was Pride Month — the month of June. While I didn't end up attending any Pride marches or celebrations that year, I've since then always considered that psalm and its accompanying homily my very first Pride celebration.

Big businesses plaster their storefronts with rainbow products and signs, but the heart of Pride Month is not rainbow-washed profits that soar while global poverty increases in the midst of ever-rising inflation. The heart of Pride Month is celebrating the radical message that no matter where we are on our journey of queerness, gender nonconformity, or allyship, that we are wonderfully made. It is commemorating forms of love, kinship and community that have always defied normativity, and that persist and resist injustice.

The first Pride March was led by predominantly Black and Brown trans women in June 1969 as an act of resistance against an unjust police raid of their gathering place, an event known as the Stonewall Uprising. For those unfamiliar with the history of this event and how it fits into U.S. LGBTQ history, Stonewall Riots: Coming Out in the Streets (2019) by Gayle E. Pitman offers a young reader-friendly, easy-to-read illustrated history of Stonewall and beyond. For those with even younger children, Pitman's picture book, This Day in June (2014), illustrates simple stories and messages about what Pride Month is all about. The book's addendum also offers helpful suggestions on how to speak to young children about Pride Month and sexual orientation in age-appropriate ways.

Another beautifully illustrated book for readers young and old this Pride Month is Teresa Kim Pecinovsky's Mother God (2022). Using biblical imagery, the Rev. Kim Pecinovsky, a Korean American Disciples of Christ pastor, welcomes children and adults into imagining God as not only the Father, but also the Mother. In the book, God is poetically depicted as a protective mother hen, singer of lullabies, a mother with postpartum depression and much more. The book's creative and biblically faithful images of God, transcending God's conventionally masculine depiction, serve as a rich source of spiritual reflection.

For poetry and liturgy lovers, books to add to your Pride Month reading list include:

A Kingdom of Love (2019), a liturgically inspired poetry collection by Anglican priest and poet Rachel Mann, who is also a trans woman. Her many other works of poetry and prose also are spiritually nourishing.

The Backwater Sermons (2021), another poetry collection, details the journey to the Christian faith by transgender poet Jay Hulme, who encountered God in the beauty of old cathedrals in the UK. Hulme's luminous poems offer spiritual wisdoms for queer Catholics, Christians and nonbelievers who are in search of a God who loves them.

Poetry collections The Tradition (2019) and The New Testament (2014) by Jericho Brown, a Black American gay poet, also draw from the richness of the Christian tradition. Brown depicts both his experiences of homophobia in his own Christian churches and reclaims biblical imageries for poems of queer liberation.

In the Catholic world, Hidden Mercy (2021) by Michael O'Loughlin is also a must read. The book, praised by many, including Pope Francis, tells of previously untold stories of Catholics in the 1980s and '90s who displayed compassion, instead of homophobia and fear, toward gay and HIV-positive members of their community.

Yunuen Trujillo's LGBTQ Catholic: A Guide to Inclusive Ministry (2022), which offers practical templates for how to minister to LGBTQ Catholics and their families, also should be added to Catholic ministers' bookshelves.

Stories of the Global South, with large populations of Catholics and Christians, are also indispensable to Pride Month no matter where we are. Fairest (2021) by Meredith Talusan (2021) is the author's memoir of her growing up as a fair-skinned Catholic Filipino child with albinism, her immigration to the United States and her transition to becoming a woman while navigating the precarity of her race, albinism and immigration status.

These and many other books remind us of the many faces of queer joy, sorrow, resistance and hope in our churches and in our world — and the many imageries of God that transcend our imagination. It is my hope that this Pride Month, the question that we ask is not only "How can we, as Catholics, be a more welcoming presence to queer people?" but also "How can we allow queer individuals and their deep faith and spirituality to transform us all?"

Through reading and listening deeply to the poems, prayers and stories in these books (and to the queer people in our own lives) this Pride Month, may we ourselves see and pray to a God whose radical love also transcends the boundaries of convention to reach each and every one of us.