by
Opinion
People
This article appears in the How Jews Appreciate Catholics: Three Views feature series. View the full series. 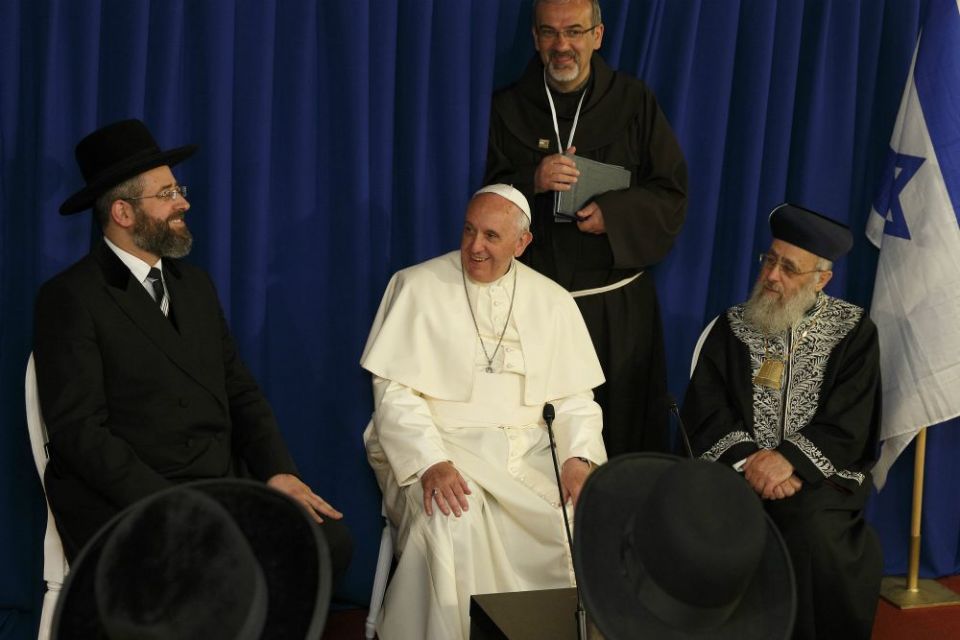 Pope Francis visits with Israel's two chief rabbis, Ashkenazi Rabbi David Lau, left, and Sephardic Rabbi Yitzhak Yosef, in at the Heichal Shlomo center in Jerusalem May 26, 2014. Looking on is the pope's translator. The pope told them that Jews were not collectively responsible for the death of Jesus and called on Christians and Jews to develop greater appreciation for their common "spiritual heritage," through deeper knowledge of each other's faith, especially among the young. (CNS/Paul Haring)

Editor's note: This is the third in a series of essays by Jewish writers reflecting on their experiences with the Catholic community and answering the questions: What makes us approachable today, given our history and particularly this moment when we have revealed the worst of ourselves in the ongoing sex abuse scandal? Do you see something in us, in our art, in our tradition, in our work and ministries, that we might even overlook today given the tensions and embarrassing scandals within our community? For a more detailed explanation of the series see "NCR Connections: New series explores how Jews appreciate Catholic tradition."

Since 1968, I have been a professional "Catholic watcher." As the American Jewish Committee's interreligious director and senior interreligious adviser, I have joined with hundreds of priests, nuns, seminarians, lay people and parochial school students on a myriad of pioneering Catholic-Jewish educational programs and projects, academic conferences, media appearances and countless visits to the Vatican, Israel, Germany and Poland.

I have had 15 personal meetings with Popes John Paul II and Benedict XVI and authored a book describing how three American cardinals — Richard Cushing, Francis Spellman and John O'Connor — played major roles in the adoption and implementation of the Second Vatican Council's Nostra Aetate declaration that called for mutual respect, knowledge and understanding between Catholics and Jews.

I have been an overnight guest in numerous monasteries and spoken publicly in St. Patrick's Cathedral and in other Catholic churches. I hold honorary doctorates from St. Leo University and St. Martin's University, and I am a proud co-founder of the Center for Catholic-Jewish Studies on the St. Leo campus in Florida and a professor of religion at that university.

For all these reasons, and many more, I can assert without exaggeration, irony, or condescension: "Some of my nearest and dearest friends are Roman Catholics."

And that is precisely why I have profound "rachmoness" — the Yiddish word meaning "compassion" and "sympathy" — for the Catholic Church and its members as they experience the clergy sexual abuse scandal that has been called the church's greatest crisis since the Protestant Reformation. Some church leaders are fearful that an actual schism is possible within their global faith community as the sordid record of wide spread sexual exploitation and shattered public trust continues to emerge on the world stage.

However, despite being a "Catholic-friendly" rabbi, I cannot enter into internal church issues that include the question of clerical celibacy, the intense criticism directed by some Catholics against Pope Francis for his alleged tepid leadership regarding clergy sexual abuse, and the growing number of disillusioned Catholic families who are "voting with their feet" as they leave the church.

Those issues and others like them must be addressed, but they can only be resolved by Catholics themselves. But I do wonder whether a large ancient church community numbering over a billion people can achieve a healing, compassionate and just resolution before permanent and irreversible damage is done. That remains an open question that will ultimately determine the future of the church.

But even as Catholics confront the pathology of sexual abuse among their clergy, I urge them not to abandon or divert attention from two specific aspects of modern Roman Catholicism that I admire: the revolutionary change in the church's relationship with the Jewish people and Judaism, and its remarkable and steadfast commitment to social justice. Those areas of human engagement represent two of Catholicism's crown jewels. They are too important, too significant, too vital to be diminished, or, God forbid, relegated to the ecclesiastical dustbins of history.

During the Second Vatican Council (1962-1965) in Rome, Catholic prelates from around the world confronted a century that had produced scientific and intellectual revolutions, Nazism, fascism, communism, two world wars, the atomic and hydrogen bombs, and the Holocaust. High on the council's agenda was the need for the Roman Catholic Church to change its often-negative and harsh teachings of contempt towards the Jewish people and Judaism.

Pope John XXIII, who convened the council, believed it was imperative for the church to discard its traditional adversarial stances about Jews and Judaism, and replace them with a constructive relationship built upon mutual respect and understanding.

In June 1963, John XXIII died and was succeeded by Paul VI who continued his predecessor's efforts to adopt a strong declaration about Jews and Judaism.

Led by Cushing and Spellman, American Catholic leaders moved decisively at the Second Vatican Council to make certain a substantive document emerged after three years of debate, revisions and indecision.

In September 1964, Cushing demanded the long delayed council statement be "more positive, less timid, more charitable." He added, "We cannot dare attribute to later generations of Jews the guilt of the crucifixion … (There is) universal guilt. … We must deny that the Jews are guilty of the death (of Jesus)…"

"There is no Christian rationale — neither theological nor historical — for any iniquity, hatred or persecution of our Jewish brothers. … In this our age (of the Holocaust), how many Jews have suffered! How many have died because of the indifference of Christians, because of silence! ... Let our voices humbly cry out now!" 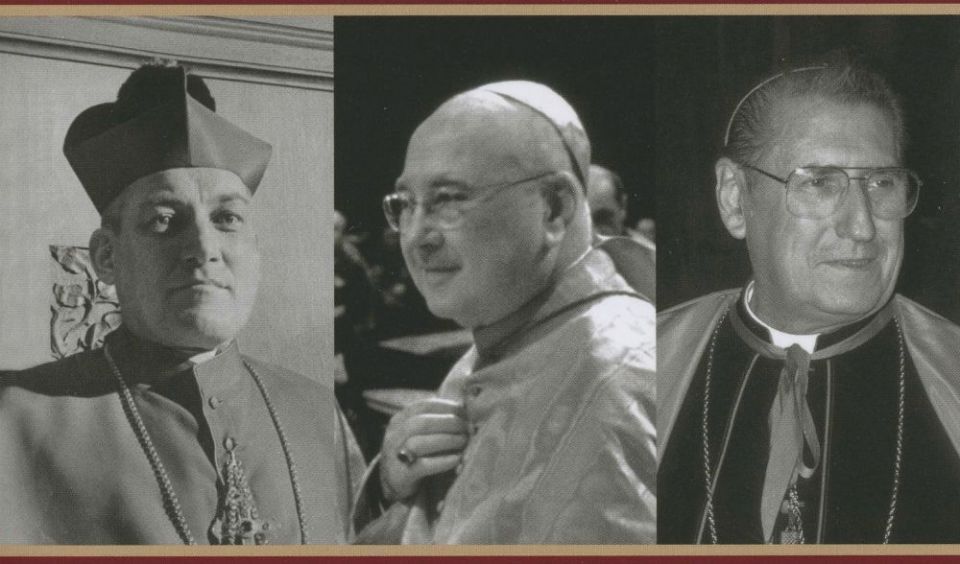 Cushing's powerful speech was widely reported and he was featured on a Time magazine cover.

Finally, in October 1965, the world's bishops adopted the Nostra Aetate ("In Our Time") statement, and Cushing's powerful speech helped insure the vote wasn't even close: 2,221 to 81.

Indeed, since 1965, there have been more positive encounters between Catholics and Jews than there were during the first 1,900 years of the Roman Catholic Church. It is an achievement that remains a model for other antagonistic groups to emulate. It would be a calamity if the gains of the past half century were relegated to the sidelines while the church devotes its main attention to healing the wide spread pain and human destruction caused by the sexual abuse scandal.

I also implore Catholic leaders not to weaken their long and extraordinary commitment to social justice concerns in society that began with Pope Leo XIII's 1891 encyclical Rerum Novarum and has continued with Pope Francis' 2015 encyclical "Laudato Si', On Care for Our Common Home."

During my five decades of interreligious efforts, I have been amazed, and frequently awed by the work of so many Catholic nuns, priests and laypeople who have followed the biblical commandment "not to stand idly by the blood of one's brothers and sisters", and recognized the need to bring justice to "the widow and the orphan" among us. 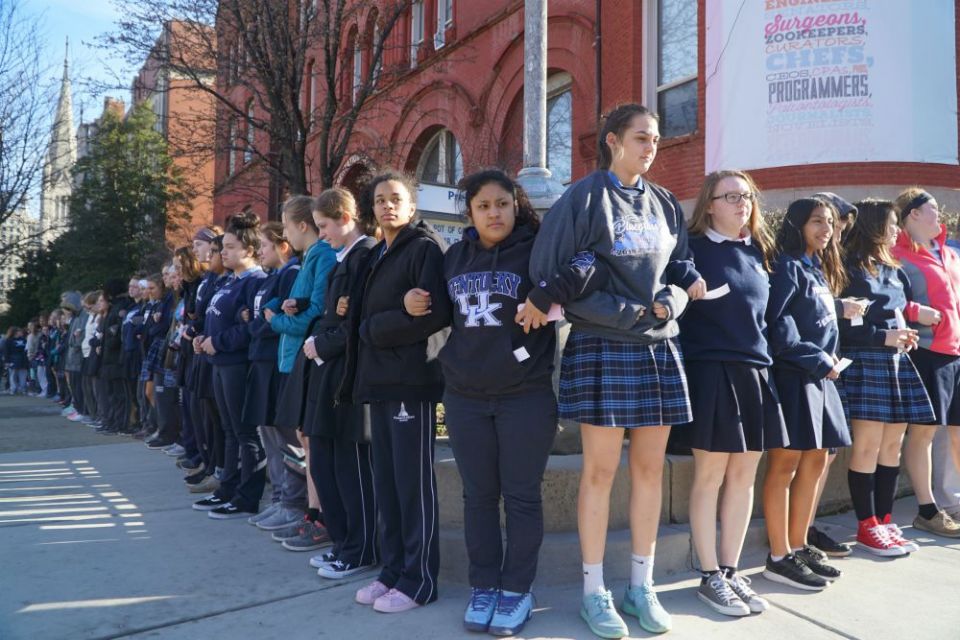 Presentation Academy students stand arm in arm on the sidewalk in downtown Louisville, Kentucky, after walking out of class March 14 to call attention to gun violence. These Catholic school students were among thousands around the nation who participated in a National School Walkout. (CNS/The Record/Marnie McAllister)

There were many Catholics who were early and steadfast supporters of the successful movement to liberate Jews and Christians from persecution and suffering in the former Soviet Union. In that effort, two beloved Catholic nuns aided me personally in that work: Anne Gillen and Margaret Traxler. Srs. Mary Boys, Gloria Coleman, Celia Deutsch, Carol Rittner, Rose Thering and many others have been cherished colleagues in building sturdy human bridges of reconciliation between Jews and Catholics.

Msgr. George Higgins taught me and millions of other Americans about the dignity of human labor, economic justice, and trade union solidarity. Frs. Daniel and Philip Berrigan championed civil and human rights and devoted their lives to the quest for global peace. And I continue to be inspired by Dorothy Day's teachings and her Catholic worker movement and, more recently, by Sr. Simone Campbell's "Nuns on the Bus" campaign for social justice.

I strongly believe the church is fully capable of resolving the sordid clergy sexual abuse crisis without weakening its commitments to positive Catholic-Jewish relations and social justice. The church can and must do both sacred tasks at the same time.

[Rabbi James Rudin has been a member of the American Jewish Committee's professional staff for 32 years and Distinguished Visiting Professor of Religion and Judaica at Saint Leo University. He is the author of Cushing, Spellman, O'Connor: The Surprising Story of How Three American Cardinals Transformed Catholic-Jewish Relations and Christians & Jews — Faith to Faith: Tragic History, Promising Present, Fragile Future.]

A version of this story appeared in the Dec 14-27, 2018 print issue under the headline: Concentrate on Catholicism's crown jewels .

Art and beauty can carve a path through a fallen world