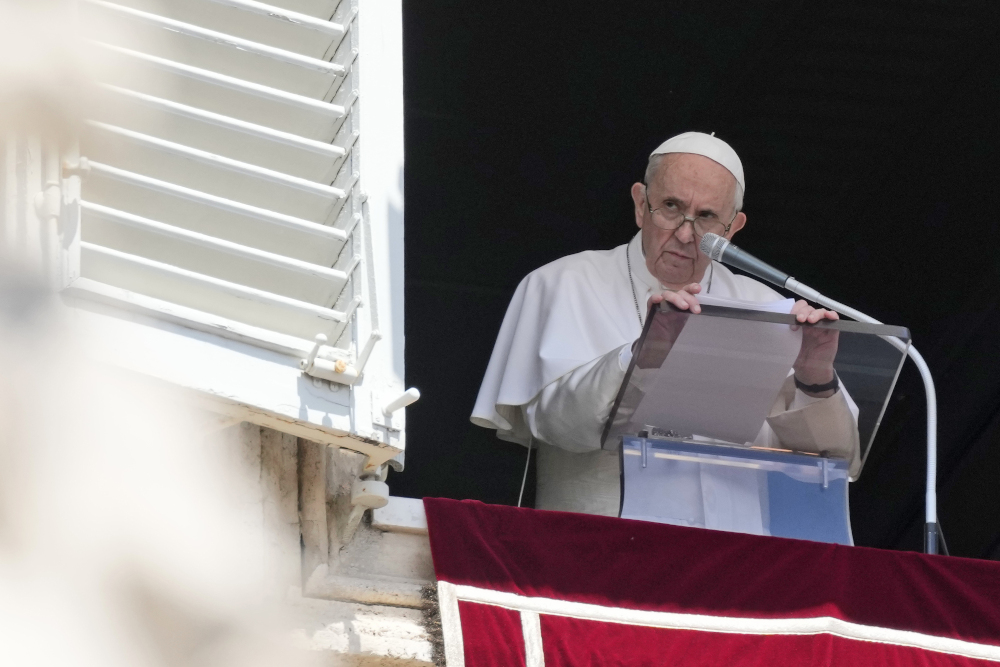 Pope Francis reads his message during the Angelus noon prayer July 18 from the window of his studio overlooking St. Peter's Square at the Vatican. (AP/Alessandra Tarantino)

Media coverage of the Catholic Church can sometimes feel like a bad weather system that settles over my soul.

Those hopeful days in March of 2013, when Pope Francis' election signaled a season of opportunity and renewal for Catholicism — a "springtime" for the church — can feel as distant a memory as our lives before the pandemic upended any notion of normal.

So many Catholics today are exhausted.

In the past few years, we have watched a beloved cardinal, the former archbishop of Washington, fall from grace, exposed as a sexual predator who used his influence to abuse children and seminarians. A Pennsylvania grand jury report, released in 2018, again chronicled the chilling, institutional scale of the clergy sexual abuse crisis.

Only a few days after that report landed, a former papal nuncio to the United States launched a conspiratorial campaign to bring Francis down with a series of discredited accusations that were nonetheless amplified by conservative clergy and right-wing Catholic media.

As a result, by the time the 2020 presidential election hit full stride, many Catholics were already feeling disconnected and disillusioned with a hierarchy that often seems more committed to power and privilege than mercy and justice. When some of the same religious leaders who opposed Francis became cheerleaders for a president who stoked nativism and racism, the church's already threadbare moral credibility quickly unraveled.

The most conservative bishops named abortion as the preeminent issue in the election and took to using the digital pulpit of Twitter to take shots at President Joe Biden's Catholic faith. No matter one's views on abortion, that compartmentalization of centuries of Catholic social justice teaching appeared to be nothing more than a grand transactional bargain with Trumpism.

Read this next: The Pillar investigation of Msgr. Burrill is unethical, homophobic innuendo

This week, Catholics woke up to headlines about a top clergy leader at the U.S. Conference of Catholic Bishops who resigned after accusations that he used Grindr, a popular dating app among LGBTQ people. The Pillar, the Catholic outlet that broke the salacious story, immediately faced criticism for how it obtained the priest's private interactions and the questionable ethics of publishing the information.

The dispiriting spectacle that the Catholic narrative in public life has become is a soul-wearying experience. The steady drip of bad news — a Catholic school fires an unmarried pregnant teacher, the Vatican's doctrine office tells LGBTQ couples they are unworthy of any church blessing — leaves many Catholics wrestling with their relationship with a church that can inspire us and enrage us, sometimes in the same day. We vent on Twitter, rant to partners or friends, ruminate alone in the quiet cellar of our conscience.

I buck myself up with a reminder that Catholicism is much bigger than the latest scandal or headline. The church is an ancient, beautiful and flawed vessel that has carried the best and worst of humanity over the centuries. At my baptism, I inherited a faith tradition and history rich with the treasures of mysticism, the examples of fearless spiritual reformers, people who tried to follow humbly in Christ's footsteps.

Being a member of a church that stretches back to the time of the apostles imbues you with an appreciation for the long view.

They walked alongside corrupt men, hungry for power, who led lives juxtaposed to the gospel on their lips. At times, the saints and sinners could be found in the same person. Sin and grace are not served a la carte. This is how it was and will always be. Being a member of a church that stretches back to the time of the apostles imbues you with an appreciation for the long view.

The late Cardinal Avery Dulles, a Jesuit who had converted to Catholicism as a young man after growing up in a family of diplomats and influential leaders, once described his unexpected move into the Catholic Church as that of a timid swimmer who "jumps into the roaring sea."

Faith is always a leap. The waters have been swirling for a long time.

I still believe the best of Catholicism can enrich our culture, politics and search for meaning. The artists, activists and ordinary Catholics who live our faith in the shadow of scandal and hypocrisy are not blind to the flaws of our church. We persist because we search and struggle together, connected in spirit and memory to all those who did the same before us, and to future generations who will take up this difficult, worthy pilgrimage after we are gone.