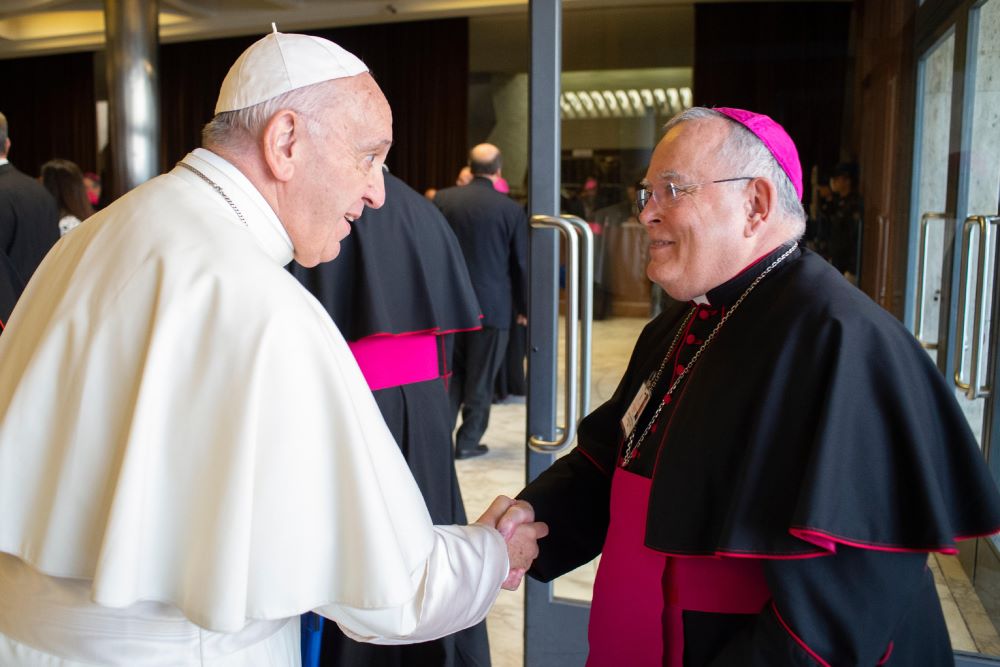 Pope Francis greets Archbishop Charles J. Chaput of Philadelphia before a session of the Synod of Bishops on young people, the faith and vocational discernment at the Vatican Oct. 16, 2018. (CNS/Vatican Media)

A recent article about synodality at First Things magazine by Francis Maier, the longtime amanuensis to former Philadelphia Archbishop Charles Chaput, displays a rhetorical trick that has become a staple of some conservative political operatives and their media hangers-on: Focus on your opponent's strength, and muddy the waters by claiming it is really his or her weakness. The attack is noteworthy because the opponent Maier has selected is Pope Francis.

Maier cites his former boss to claim that the synods held under John Paul II, or at least the 1997 Synod on the Americas that Chaput attended, were genuine expressions of the synodal spirit, with free-flowing discussion and exchanges of ideas.

"It was a great experience, my first real participation internationally in service to the universal Church," Chaput wrote. "It was there that I met then-Archbishop Jorge Bergoglio from Buenos Aires. He was an impressive man and made good contributions to the discussion. We sat near each other because we'd been appointed archbishops at about the same time. The synod led me to seek out a much closer relationship with the Churches in Mexico and Latin America, and Latino Catholics in the United States."

That 1997 synod was a smaller, regional synod, where it was no doubt easier for Chaput, who is not conversant in Italian, to fit in and join the conversations.

Pope Francis has made synodality such a central focus of his legacy, I think his critics need to try and derail it. They can’t risk the synodal process being a success.

Turning to the 2015 Synod on the Family and 2018 Synod on Youth, Maier relates Chaput's disapproval. "I was very disappointed by what I saw as manipulation of the synods and their agendas by elements within and outside the Church," Chaput said. "Instead of being occasions for an honest exchange of ideas, both synods were dominated by efforts to re-engineer the direction of the Church."

Maier recalls the late Archbishop Philip Tartaglia of Glasgow handing Pope Francis a note objecting to certain things being proposed, and claims Francis "dressed him down rudely for writing it, and then walked away." It is not clear why the pope would have been irritated by the contents of something he had apparently not had a chance to even read!

My colleague Jesuit Fr. Tom Reese wrote at the time of the 2015 Synod on the Family about some of the changes that were facilitating, not inhibiting, dialogue. He did not perceive anything in the way of manipulation, only the introduction of some new ecclesial approaches.

It is worth recalling that well before the 2015 synod, in the wake of the 2014 synod, the opposition to Pope Francis was taking shape, and the shape that opposition took was to denounce the effort to even discuss certain controversial issues. Who was one of the first U.S. archbishops to denounce the first synod under Francis? Chaput.

At a symposium hosted by First Things immediately after the 2014 synod, Chaput said, "I was very disturbed by what happened [at the synod]. I think confusion is of the devil, and I think the public image that came across was one of confusion."

It was an outrageous thing to say. Does Maier want us to believe that Chaput went in to the 2015 synod with an open mind, seeing as it was called to complete the work of the 2014 event that Chaput thought sowed devilish confusion?

As for the 2018 Synod on Youth, does Maier expect us to forget that he posted a photo on Facebook of a gathering of Catholic neocons during that event: writer George Weigel; David Scott, longtime aide to Archbishop José Gomez; Robert Royal, editor of The Catholic Thing; etc.

Way back in 1999, I pointed out that the American Catholic neocons failed to grasp the difference between engaging the world and complicity with the world, and this remains the defining problem with Maier's analysis: Synodality is, among other things, an effort to sideline ecclesial worldliness. How many times has Pope Francis warned that a synod is not a parliament?

Maier rounds out his analysis with some abstract comments about the relationship of truth and love, a nasty comment about the " 'hermeneutic of rupture' — which has dogged the Catholic life since Vatican II" — and the promise of prayers for the Holy Father.

This is not the first time that Maier has taken a shot at Pope Francis and the idea of synodality. In 2019, he delivered a lecture at St. Charles Borromeo seminary in Philadelphia in which he said:

Again, neoconservative critics do not see the degree to which their ecclesial approach is steeped in worldliness.

The real problem with Maier's analysis — and with Chaput's bitterness — is that it is no longer possible to believe they are acting in good faith. I frequently get notes or phone calls from conservatives who have difficulty with some things this pope says or does, but without the nastiness, without the "How dare he?" attitude, without the sour grapes.

Why is Maier's article coming out now? The next synod is not until next October. Pope Francis has made synodality such a central focus of his legacy, I think his critics need to try and derail it. They can’t risk the synodal process being a success.

Like the raft of articles speculating about the pope's resignation or even discussing who the next pope might be, Maier's article is an effort to undermine Francis' papacy, to hope that his reforms will follow him into retirement or into the grave. These critics fear that synodality might bring the new dynamic approaches to ecclesial life they have fought so desperately to keep at bay.