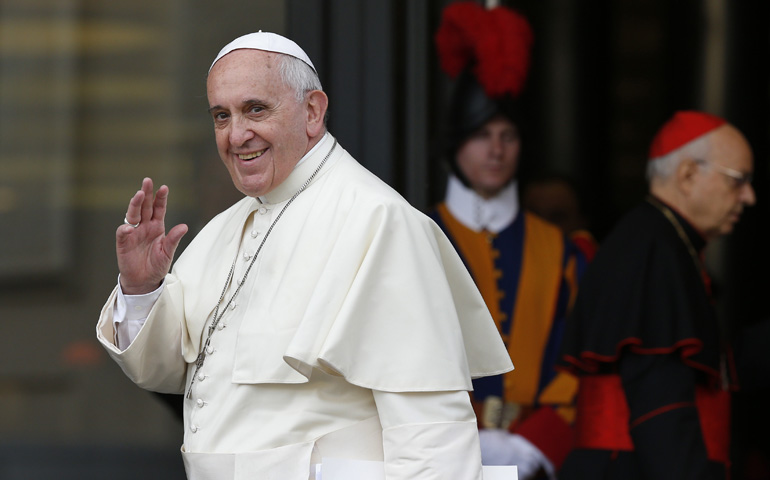 Pope Francis waves at the media as he arrives for the morning session of the extraordinary Synod of Bishops on the family Thursday at the Vatican. (CNS/Paul Haring)

For those who have watched the synod process since it was first initiated under Pope Paul VI, the current meeting has some unique aspects that come from Pope Francis.

Speak boldly. The most obvious change in the procedures is the pope's encouragement to the synod participants to speak their minds. "Speak clearly," he exhorted them on the first day of the synod. "Let no one say, 'This can't be said, they will think this or that about me.' Everything we feel must be said, with parrhesia," a Greek word meaning to speak candidly or boldly, and without fear.

The term parrhesia is used of Sts. Paul and John when they spoke before the assembled leaders, elders, scribes and priests in Jerusalem after the resurrection of Jesus (Acts 4:13). Pope Francis also applied it to Sts. John XXIII and John Paul II, whom he said were "filled with the parrhesia of the Holy Spirit."

"After the last consistory in February 2014," reported the pope, "... a cardinal wrote to me saying that it was a pity that some cardinals did not have the courage to say certain things out of respect for the pope, thinking perhaps that the pope thought differently. This is not good -- it is not synodality, because it is necessary to say everything that in the Lord we feel must be said: without human respect, without timidness."

It is difficult to exaggerate what a change this is in the synod process. At past synods, it was common for curial officials to warn participants not to bring up certain topics, like married priests, birth control, and Communion for divorced and remarried Catholics. Those who did were reprimanded. Rather than advising the pope, synod participants often used their speeches as opportunities to prove their loyalty by quoting the pope to himself.

At the last synod on evangelization, then-Cardinal Jorge Borgoglio was in charge of organizing and guiding the discussions.

"I was the rapporteur of the 2001 synod and there was a cardinal who told us what should be discussed and what should not," the pope told La Nacion, an Argentine newspaper. "That will not happen now." Francis is not afraid of discussion and disagreement.

If the synod accomplishes nothing other than more freedom of discussion in the church, it would still be a huge achievement.

Inductive rather than deductive. Past synods tended to start with church teaching and talk about how it could be applied to the world. This follows the classical philosophical and theological method that the bishops learned in their seminaries.

"What's happening within the synod is we're seeing a more inductive way of reflecting, starting from the true situation of people and trying to figure out what's going on here," said Archbishop Paul-André Durocher, president of the Canadian Conference of Catholic Bishops.

This approach, beginning with the data of experience, is familiar to many in the church; for example, the "see, judge, act" approach of those working for social justice. Those involved in pastoral planning also do situation assessments at the first stage of planning. Many contemporary theologians also reflect on the lived experience of Christians in their theological reflection. Rather than taking an ideal and imposing it on reality, one first reflects on reality.

This is another contribution of Pope Francis. "Synod assemblies are not meant to discuss beautiful and clever ideas, or to see who is more intelligent," he said in his homily at the opening Mass for the synod. "They are meant to better nurture and tend the Lord's vineyard, to help realize his dream, his loving plan for his people."

Remember, this is a pope who did not finish his doctoral dissertation in theology. He began life as a chemist and was a pastor and spiritual director, not an academic. He is certainly not anti-intellectual -- he is well read and respects theologians like Cardinal Walter Kasper -- but he has learned as much from experience as from books.

Collegial consensus building. There are many people urging Pope Francis to intervene on one side or another of the synodal debates. This is not his style. Rather, he urges everyone to speak and listen. He trusts in the Holy Spirit to guide the bishops in collegial discernment. He is not in a hurry. You might say that for him, the process is more important than the product.

This does not mean that he does nothing. But rather than giving impassioned speeches to sway the assembly, he will more likely speak to the bishops one by one, both at the synod and between synods, and facilitate consensus that way. This is the way he operated with the bishops in Latin America when he was archbishop of Buenos Aires, Argentina.

For the pope, the synod is not just a two-week process; rather, it continues until the end of next year's synod in October 2015. "Do not expect any final positions next week," the pope told La Nacion. "This will be a long synod, which will probably last a year. I am only giving it the initial push," he added.

One of the procedural changes initiated at this synod is to have an hour of "free discussion" every evening, where bishops are supposed to respond to what they heard during the day. In the past, prepared speeches were given, one after another, with no real interaction. People in the synod report that during this hour, greater interaction is taking place as synod participants respond to each other, but about half the bishops use this time to simply give another speech. Change comes slowly.

CELAM process. There is no question that Pope Francis brings to the synod his experience of working with other bishops in CELAM, the Latin American bishops' conference. The bishops had a frustrating experience at Santo Domingo in 1992, when the Vatican imposed its agenda on them.

In contrast, at the 2007 Aparecida meeting, then-Cardinal Bergoglio "wanted to create an environment in which there was a lot of participation," according to Archbishop Víctor Fernández, who as rector of the Catholic university in Buenos Aires worked closely with Bergoglio.

"Cardinal Bergoglio did not want to start with a pre-set text," Fernández said. He "wanted the bishops to speak with absolute freedom ... so that little by little consensus would be found." To those who felt the process was too slow, he would "say that if there wasn't time to write a document, that was too bad, but that's the way we have to work."

But CELAM had something that the synod does not: commissions that worked on topics between meetings. "There was a very free discussion" in the commissions, Fernández reported, "and texts would emerge from each of these commissions." When the bishops go home from the synod, they will have no commissions to continue their work until their next meeting. That will be left to the Roman Curia, which in the past has not been a big supporter of collegiality.

Francis could make a big difference by guiding the process between synods, but in the long run, the lack of synodal committees or commissions is a critical flaw in the process. There is a synodal council elected by the members, but the agenda is simply too big for one committee.

Pope Francis would do well to appoint more commissions after the synod to carry forward its work to the next synod. For example, there could be commissions on topics like the Orthodox method of dealing with divorced people, marriage preparation, interfaith marriages, new ways of talking about marriage and family, birth control, pastoral care of children in divorced families, pastoral care of gays, the impact of poverty and war on families, the role of women, etc. These commissions should be made up of synod members, not just curial officials.

One drawback of the CELAM process was that the texts developed by the various commissions did not always fit well together. "There was very little time to put together the Aparecida [concluding] document, which is why it's a bit of a mish-mash from the point of view of style," Fernández said. "But the greatness of that document lies in the fact that it was the fruit of a genuine debate, of real discussions where consensus emerged little by little."

"If you ask me what light this sheds for understanding the pope's behavior today [in the synod]," Fernández said, responding to my question, "I'd say it's quite possible that the pope wouldn't be too worried if this synod doesn't produce anything extraordinary or if it isn't greeted with great applause. Because he has always believed that time is greater than space, that the important things brew slowly over time, and that the important thing is to initiate processes rather than force decisions. And that these, at the right time, will produce good fruit."

There is one thing that the synodal process has that the CELAM did not: a pope. At CELAM, Bergoglio was one among equals. In Rome, Francis is pope, albeit a pope who wants to be collegial. How that dynamic works out will be interesting to watch.