A recent trip to the island nation with Benedictine Sr. Joan Chittister was enlightening 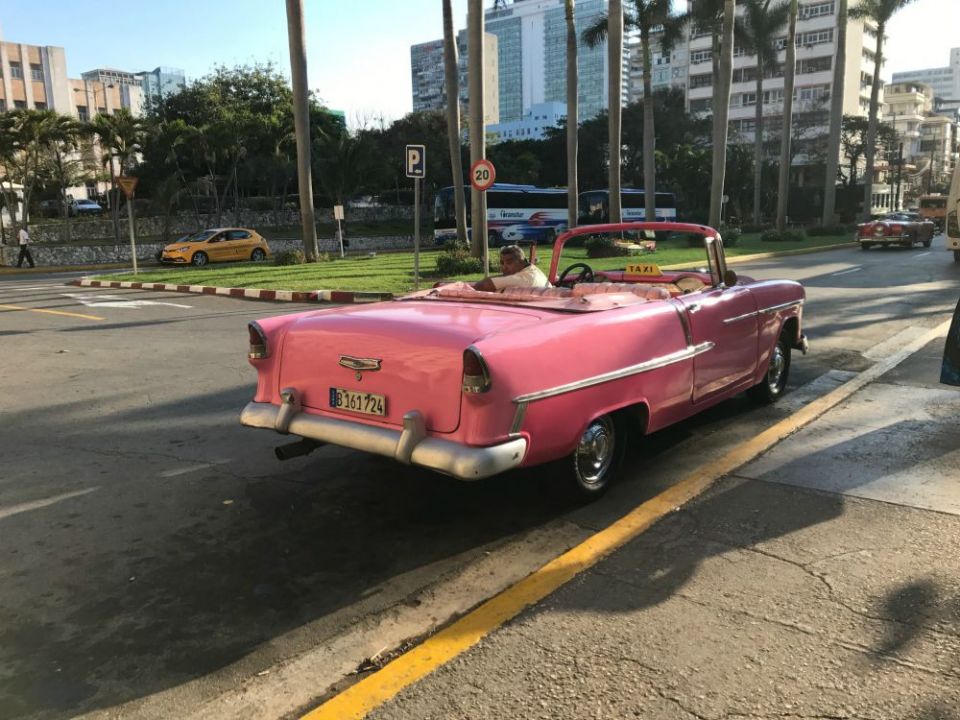 For $50, Cubans will take you for an hour's spin in one of "our national monuments," American cars from the 1950s. (Patricia Lefevere)

HAVANA, CUBA — "The most beautiful island in the world," Columbus is reported to have uttered on Oct. 27, 1492, during his first forays onto the sandy black beaches of the largest landmass in the Caribbean.

"Cuba" means "fertile land," Luis, my local guide told me, during two days of walking and hopping on and off tourist buses Feb. 5-6 in the Cuban capitol of Havana. The locals pronounce it "Koo-bah," he said, as a fleet of colorful 1950s Buicks, Chevrolets and Pontiacs whizzed past.

With no access to spare parts for cars, Cubans boast of being the top mechanics in the world. They have refitted the engines and for $50 will take you for an hour's spin in one of "our national monuments." Free enterprise is alive in Havana and in need of the 4.1 million tourists who visited Cuba last year.

I joined Benedictine Sr. Joan Chittister and 117 other tourists who had long wanted to see this land and to learn why it had been so difficult to visit for nearly all our lives. Our group held discussions on Cuban issues such as human rights, press censorship, healthcare, education and religion.

While most of my companions on the Educational Opportunities tour aboard the Greek liner Celestyal Crystal were retired Americans, a handful were Irish, British, Canadian, Australian and New Zealanders whose governments had had less contentious relations with Marxist Cuba 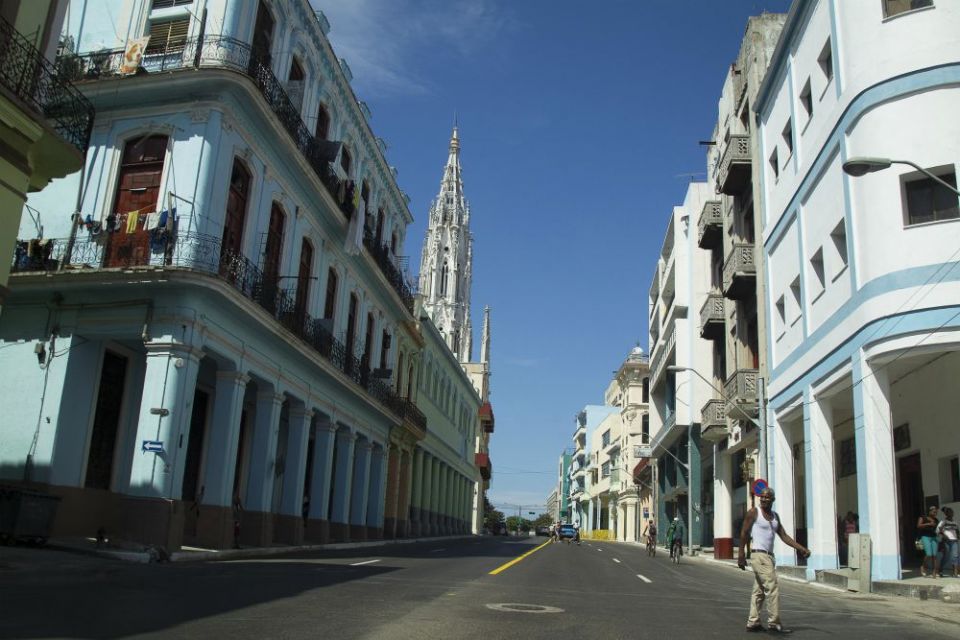 A man walks near the Church of the Sacred Heart of Jesus in Havana Sept. 19, 2015. (CNS/Tyler Orsburn)

Many seemed shocked by the evident poverty and shortages faced by most Cubans. "Nobody lives on $30 per month," noted our guides, referring to the government's official average monthly wage. They were quick to point to a quasi-"underground" economy in which even doctors and university professors supplement their wages as tour guides, baristas, maids and drivers. Several home owners offer hospitality to tourists, a Cuban version of the Airbnb business model. Coveted construction jobs are plentiful, too.

Many a Cuban thanked President Barack Obama and Pope Francis for normalizing relations between Washington and Havana after almost 60 years of ingrained hostility. They showed us the National Theatre where Obama addressed the Cuban people in 2016.

They hoped President Donald Trump would not stem the flow of visitors, as tourism tops Cuba's gross domestic product column today. Close behind, though no official figures are published, is the estimated $3.1 billion repatriated by Cuban exiles to family and businesses on the island last year.

Cuba — the size of Vermont and New Hampshire if laid back to back — remains the jewel of the Caribbean. Smack in the middle of the sea, it resembles a sleepy crocodile. Its head points west, its tail tucked under menacing anyone who would invade from the east. In between are harbors, estuaries, forests, mountain ranges, a lode of mines — copper, nickel, manganese, cobalt and chromium — and millions of acres of sugarcane, tobacco and coffee.

For five centuries these crops have been the economic mainstay for Spanish and American colonizers and for Cuban landowners. Spain imported a million Africans to work the fields, subjecting them to slave conditions. Africa's presence in Cuba is still visible in the art, music, dance and religious rituals of half of the island's 11 million citizens.

In Cienfuegos, a historic port city in south central Cuba, Hilda, our guide, pointed to a boulevard that prior to the Castro-led revolution in 1959 was a segregated avenue with whites on one side and blacks on the opposite.

Already in the 1930s, it was observed that black children of cane workers lived during the non-harvest months on only the guarapa sucked from crushed cane with rarely any protein to nourish their bodies and minds. 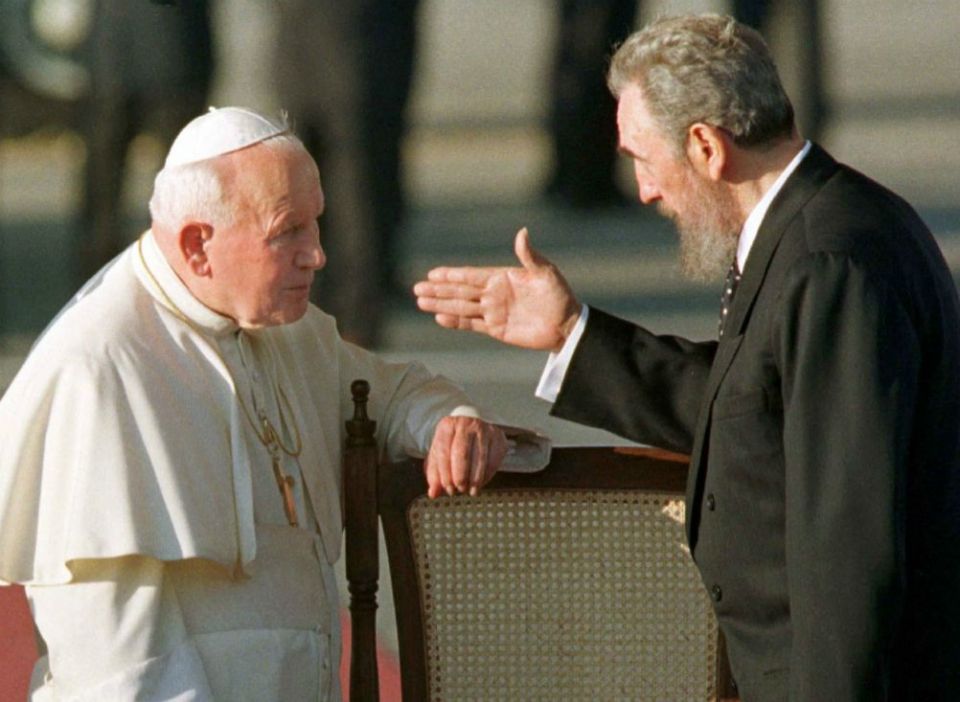 Propaganda? Fake news? Or simply a commentary penned by Ernesto Che Guevara that greatly influenced Fidel Castro during his student days at the Jesuit Colegio de Dolores where he read it. Fidel and his brothers, Ramón and Raúl, came as boarders to Dolores in Santiago de Cuba after studying briefly with the Christian Brothers who ran LaSalle, also in Santiago, Cuba's second largest city.

The three brothers were the illegitimate sons of Angel Castro, one of Cuba's largest land owners, and Lina Ruz González, a cook and servant girl whom Angel wed after the birth of their third son.

All three Castro brothers attended the prestigious school in Santiago staffed by some 80 Jesuit priests and brothers, a few other religious order men and a few lay teachers. The majority of the clergy educating and forming the 238 boys — nearly all from upper class, white families — hailed from Spain and were vocal supporters of its leader Francisco Franco.

In 1942, Fidel was asked to leave Dolores after an altercation with another student. He went on to Belen, another top Jesuit high school in Havana, where he graduated before studying law at the University of Havana.

Later in one of his rare interviews, Castro told Brazilian theologian Frei Betto that the Jesuits had taught him how to scale the hills on their school excursions — lessons he used to overtake the forces of Fulgencio Batista.

While he rejected all Christian education, nationalizing Catholic and other private schools, and exiling 3,500 priests and nuns soon after seizing power, Castro later credited the Jesuits with influencing his strict organization, discipline and values. "They contributed to my development, they influenced my sense of justice," he wrote in My Early Years. 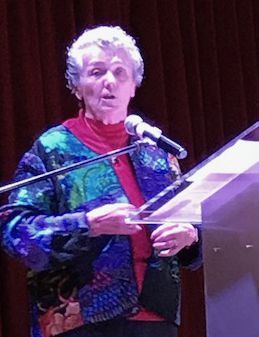 Castro missed out on both the changes wrought by Vatican Council II and by liberation theology, Chittister said during a series of four talks given while the cruise ship was circling the island. He had little understanding of the impact of religion on him or on Cuba, she added, pointing to his persecution of followers of the Afro-Cuban Santeria religion. But since Afro-Cuban culture, art, literature and religion are central to the island's identity, they are difficult if not impossible to extinguish, she noted.

Cuba's constitution had to remove the atheism requirement in 1991, amending it to proclaim the nation as secular rather than atheistic. In a 1998 talk, Castro aligned the teaching of Jesus with his own revolutionary ideology.

Chittister wondered whether this new "openness" to religion was not in fact for political gain, noting how much economic aid was coming from U.S. churches. Huge crowds showed up for the visit of Pope John Paul II to Cuba in 1998 and 1.1 million attended the Mass offered by Pope Benedict XVI in 2012. No visitor to Revolution Square leaves without hearing of these nation-changing events.

Another sign of Havana's improved relations with the church include the relief work undertaken by Caritas, the church's global humanitarian aid organization. President Raúl Castro has declared Good Friday a national holiday, and Pope Francis has become his ally in asking Washington to halt its 57-year-old trade embargo. Above all, Chittister pointed out, the Vatican never broke its relations with Havana, maintaining contacts with both Castro rulers. "That's huge," she said. 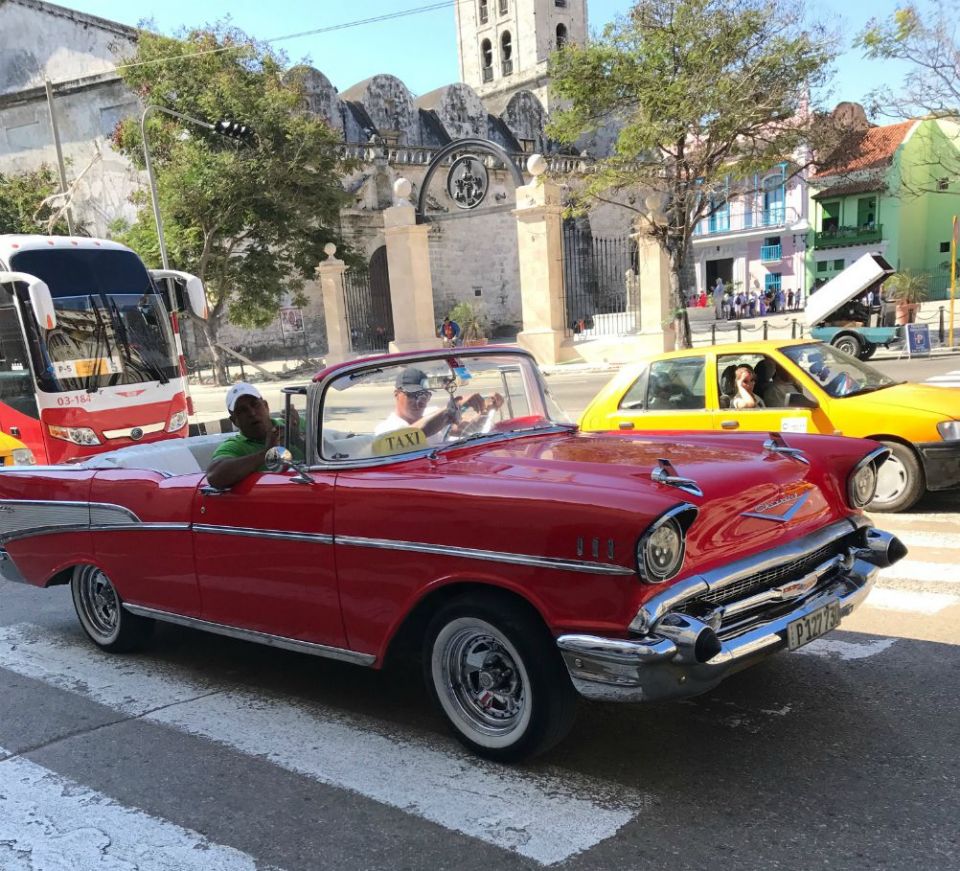 While the Educational Opportunities group was visiting, a new church opened in Sandino, Cuba, the first in 60 years, funded by a parish in Tampa, Florida. The Catholic Church is also holding leadership classes, offering a moral framework for several of the estimated half-million start-up firms that constitute a quarter of the Cuban economy and a third of its workforce.

Are all these efforts evidence that the church is playing a greater role in Cuba's future following the warming in relations between Havana and Washington initiated by Obama and Francis? As Latinos are fond of replying, their hands in the air, "Anything is possible; nothing is certain."

As another antique Buick showboat rushes past, beaming with happy tourists, those on the sidewalks wonder what the future portends for this beautiful nation's struggling people, cash-strapped and lacking so many goods that Americans take for granted.

A second convertible pulls up — this one painted white with all the black marks of a Dalmatian elaborated on its bodywork. A tourist climbs inside, hoping the country — like the car — can be refitted and that its state engine will continue to purr over the unsmooth pavement ahead.

What does Catholic President Biden need in his Vatican ambassador?

Examining the Affordable Care Act and where it goes from here

Faith and diplomacy: Hackett reflects on role as US envoy to Vatican

Supreme Court's decision on marriage called a win for love, 'a tragic error'