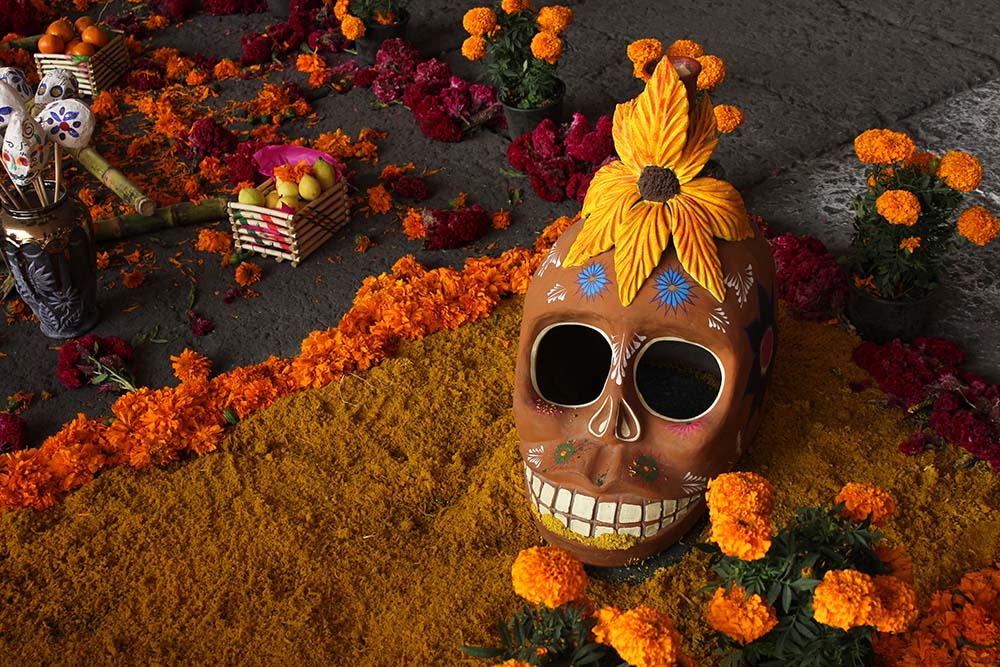 Two votive candles burn behind me.

These illuminate an ofrenda, a seasonal altar that occupies my living room. Assembling an ofrenda for Día de Los Muertos is an annual tradition, and this year, mine honors my family's Mexican matriarchs. On its lower tier, jars brim with flowers. Pink and orange tissue paper banners brighten the table. Incense spices the air while a cup of water offers relief to thirsty travelers. A dish of salt purifies and preserves. A picture of my grandmother Arcelia beautifies. A crucifix and rosary that belonged to my grandmother Esperanza evoke her long-suffering presence.

On the ofrenda's second tier, above a grinning clay itzquintli, a canine believed to chaperone souls to the afterlife, appears a sepia-toned studio portrait, a widow and her daughter dressed in Victorian garb. The widow, Narcisa, is my great-great grandmother. She sits, hands in her lap, peering at someone, or something, to the left of the camera. Felipa, my great grandmother, stands beside her, clutching a dainty purse.

Next to their portrait rests a green-eyed sugar skull, his fedora hat, iced in pastel colors, tipped to one side. He represents Magdaleno, my great-great grandfather. Federal officers executed him during the Mexican Revolution.

During childhood, my Mexican mother and Mexican American father taught my brother, sister and me about Día de Los Muertos, a religiously syncretic holiday that unites Catholic symbols, beliefs and practices with cosmologies indigenous to the Americas and Africa. Historically, this tradition has been observed in various parts of Mexico, including Oaxaca, Michoacán, Guanajuato and Jalisco, my mother's birthplace.

Celebrating Día de Los Muertos, which falls on Nov. 2, was one way that I came to weave ancestral veneration into the fabric of my daily life, and I relished the lore narrated by parents and other family members regarding the spirits.

I especially enjoyed stories involving the fate of food.

Food items, including a seasonal bread, pan de muerto, may be placed on a home altar or taken directly to a loved one's gravesite. Their purpose is to nourish hungry souls, and my father told us of a doubtful aunt who dared question the usefulness of feeding the departed. To prove that ofrendas served no purpose, she snatched pan de muerto from an altar and gobbled it. In horror, she announced, "It has no flavor!"

"Of course, it has no flavor!" her family admonished. "The spirits enjoyed it! They sucked the taste right out of it!"

My mother was raised near the second-oldest cemetery in Guadalajara, Panteón de Mezquitán. Established in 1896, murals cover the high walls surrounding its terrain. Some of these artworks feature incarnations of Death herself, and, depending on the weather, one can find Mezquitán's graveyard dogs sunbathing, hiding from the rain or scratching mosquito bites. During my grandmother Arcelia's funeral procession, a yellow canine appeared beside her coffin. My mother nudged me.

"It's your grandfather," she whispered. "He's accompanying my mother."

A breeze rustled the palm trees. The gold dog trotted alongside my grandmother, chaperoning her across cobblestones, dirt and grass. The animal watched as cemetery workers lowered her casket. At last, my grandparents were reunited. 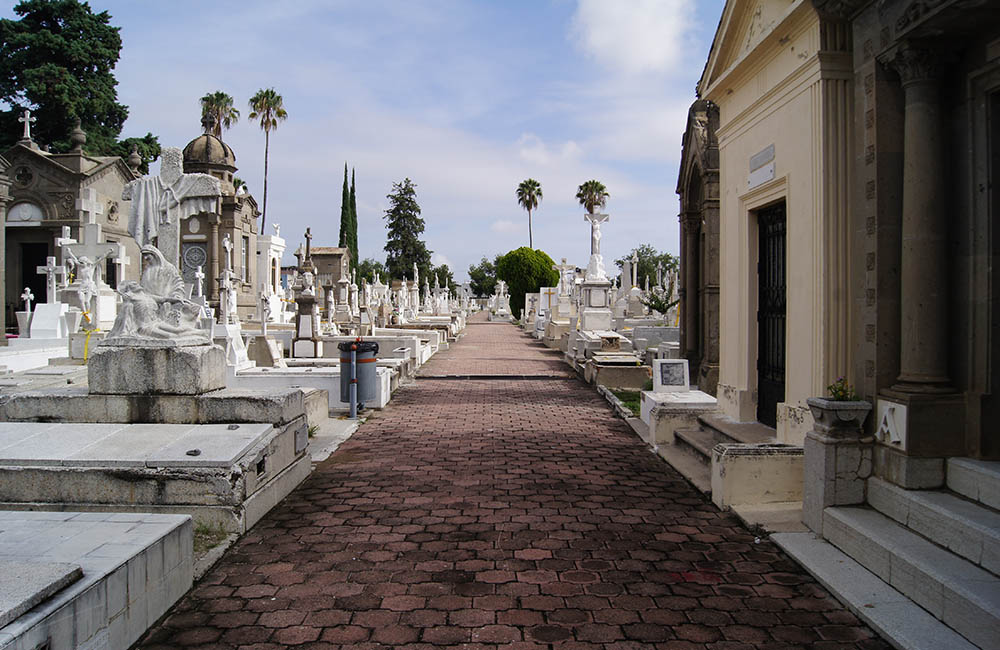 My mother tells me that as a child, she visited the graves of her ancestors and played in the cemetery. She says that she knew it was time to go to the cemetery when ants materialized everywhere, the proliferation of sugar skulls drawing them out of the ground.

My father also has childhood memories of Panteón de Mezquitán. He lived in Guadalajara until age 5 and recalls visiting the graveyard with an uncle. This relative found a human skull and sadistically chased my father through the headstones, terrorizing him.

The last time I visited Guadalajara, it was shortly after All Souls' Day. My beau and I strolled past the cemetery dogs, following the path to my family's tomb. The remnants of Día de Los Muertos surrounded us, the ghost of the holiday visible in all four directions. Faded and torn paper banners danced. Flowers wilted. Plush toys at children's graves oozed rainwater. Flies feasted on rotting fruit. Clearly, a party had happened.

Arriving at the tomb, the urge to hug my grandmother overwhelmed me. She had held me when I was a newborn, having taught my mother to swaddle me. Later, my grandmother, a portrait painter, taught me to make art and tell stories. I lay down on the blue slab covering her tomb and embraced the stone, sending love and appreciation to my grandmother. I thought of the white dress in which she was buried, how stunningly royal she looked at her viewing, her casket's glass pane letting us admire the graceful curve of her slumbering cheeks, her cloud of white curls resting against a pillow. I continue to honor my grandmother's creativity, placing a brush and tube of paint on my altar.

This essay is part of her ofrenda.