Are you open to praying to a black God? 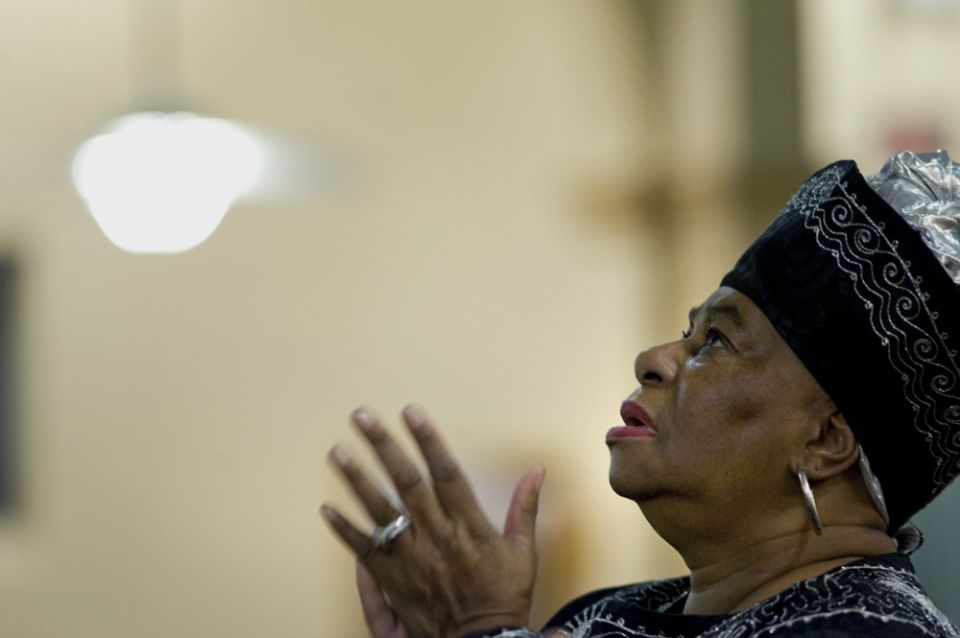 Unsurprisingly and sadly, however, I see no signs that our local Catholic parishes are celebrating Black History Month. While our problem as a church is the failure to take up the church's moral teaching for racial justice, our deeper problem is idolatry.

Catholic moral theologian Fr. Bryan Massingale emphasizes that the problem of racism is deeper than ethics. Our deeper spiritual malaise is idolatry. His Racial Justice and the Catholic Church exposes how the U.S. Catholic Church believes " 'Catholic' = 'white' " but rarely makes explicit that belief.

If white people are going to confront our own idolatry and betray the god of white supremacy, we need to "become black with God" to herald James Cone's A Black Theology of Liberation. As theologian Diana Hayes explains, Cone's metaphor works because it juxtaposes two seemingly incompatible ideas in America.

No one is shocked if God is white because that is the prevailing assumption of Western Christianity. Yet if white people were to "become black with God," we would need to address both the invisibility of our idolatry of whiteness and how we perpetuate anti-blackness.

Betraying the god of white supremacy may be an impossibility until we enter a process of contemplating and praying to a black God, as the theologian Laurie Cassidy suggests in her essay " 'Becoming Black with God,' " in Interrupting White Privilege. Cassidy draws upon the work of Cone and womanist theologian M. Shawn Copeland to imagine a way of praying that does not reduce God to race or to blackness.

For white readers who find themselves uncomfortable with the idea of "becoming black with God," perhaps that discomfort is a sign of God's grace, a recognition of our own need for purgation from the sin of white supremacy. 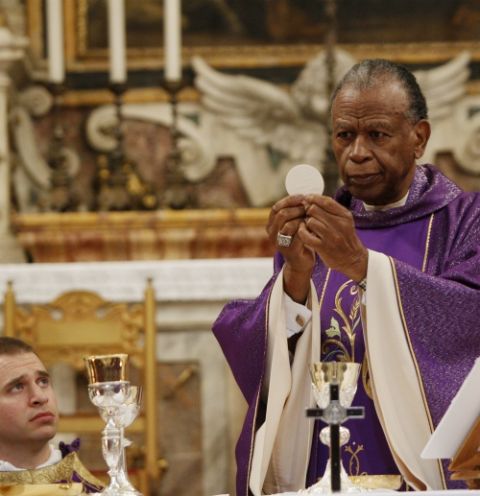 Bishop Edward Braxton of Belleville, Illinois, concelebrates the Eucharist during Mass with other U.S. bishops from Illinois, Indiana, and Wisconsin at the Basilica of St. John Lateran in Rome Dec. 11, 2019. (CNS/Robert Duncan)

How might people of faith who believe they are white begin to contemplate and pray to the black Messiah? In his "The Racial Divide in the United States: A Reflection for the World Day of Peace 2015," Bishop Edward Braxton of Belleville, Illinois, invites white people to change roles with African Americans and imagine that the images of God, the Holy Family and the saints throughout U.S. Catholic parishes are predominantly African.

Braxton invites white Catholics to join an African American friend who brings us into St. Charles Lwanga for Eucharist. Upon entering the church, we begin to notice that all images of the sacred, including Mary, Joseph and Jesus, reflect diverse African, Latina, Asian, Arab and First American faces. Braxton imagines God the Father "painted on the ceiling of the church as a distinguished older black gentleman." Even the angels throughout the church reflect African faces.

Undoubtedly, more than a few white Catholics might find themselves resisting or even angry with Braxton's suggestion. He wisely anticipates and responds to common white objections (see Section 7).

If you are open to praying to a black God, imagine with Cassidy how encountering "God in prayer may suggest God's female face as ebony and wrinkled with age as she embraces her children orphaned by AIDS."

Another possibility is following the lead of historian Cecilia Moore, associate program director of black Catholic studies at the University of Dayton, by praying with the art of sculptor Richmond Barthé, who depicted religious figures with Middle Eastern descent or as slaves.

Moore also celebrates the art of the black Catholic painter Clementine Hunter, born on the Hidden Hill Plantation in Louisiana, who often depicted a black Jesus on the cross. As Moore reflects upon the enduring legacy of these black Catholic artists, white people should also view them as "our master teachers" who teach "us through their art the beauty that radiates in us [black people], and that in loving ourselves, we love everyone."

As we prepare for and enter Lent this upcoming Ash Wednesday, white people may contemplate, following Copeland as our guide in her book Knowing Christ Crucified, the "dark and hidden wisdom" of slaves who "knew in their bruised bodies the power of prayer and openness to the Divine."

If white people are to become authentically Christian in an anti-black society, then we must become obedient to the God who is revealed in the life of slaves and the spirituals. By "dark wisdom," Copeland means "a wisdom expressed in paradox, a wisdom that countered the wisdom of the world."

The spirituals, she writes, "mediate the people's negotiation of their cruel situation, of their 'otherness,' of their blackness, these sacred incantations and chants mediate to us 'dark symbols and obscure signs.' " The biblical dark night signifies the presence of a God who " 'dwells in the thick darkness' (1 Kgs 8:12), and 'clouds and darkness are round about' the Lord God (Ps 97:2)."

The dark and hidden wisdom of slaves is in their knowing that slavery meant death for the slaveholder and slave trader and for anyone who "lived off of the buying and selling, labor and skill, rape and torture of human beings," Copeland writes. Slaves knew "the cross as the complete rejection of violence ... of mastery, of dominance."

Until white people become humble and dwell in the religious experience of slaves and their descendants, we will not be able to perceive how slaves knew that Jesus is "God's Black Slave who had come to put an end to human bondage," as Copeland quotes Cone.

Column | Are you open to praying to a black God?