In defense of the Vatican's 'back to the future' Nativity scene 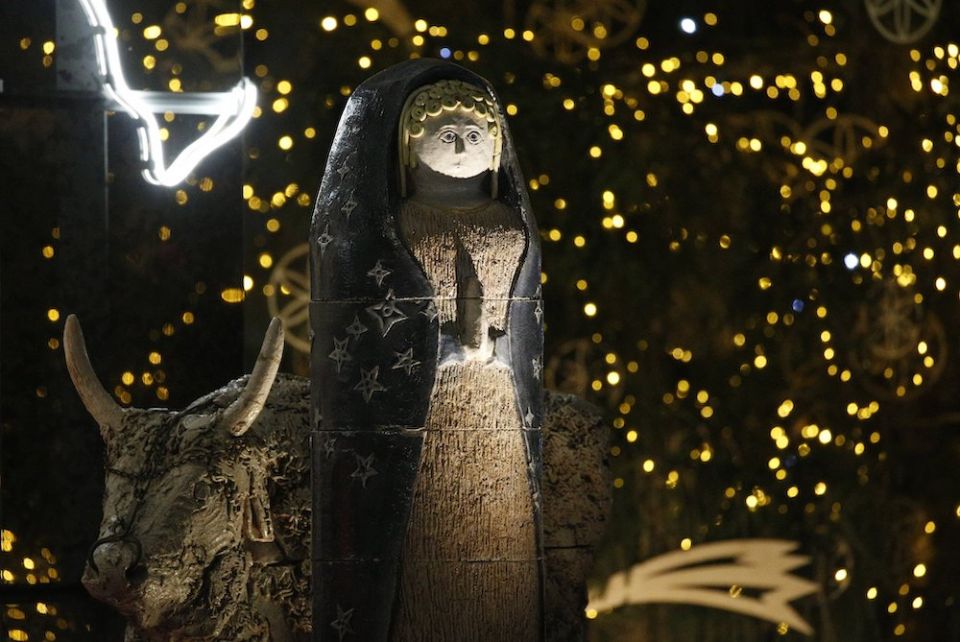 A figure of Mary is pictured in the Nativity scene in St. Peter's Square at the Vatican Dec. 14. The 52 ceramic statues were created by an arts high school in Castelli, Italy, between 1965 and 1975. (CNS/Paul Haring)

"Grotesque." "Demonic." "Weaponized ugliness." These are just some of the reactions to the Nativity scene the Vatican has placed in St. Peter's Square this year.

It is, to be fair, starkly different than many of the other crèches you might see this year in front of your parish or in your home — a selection of striking, larger-than-life ceramic statues from a 52-piece collection created by an arts high school in Castelli, in the Abruzzo region of Italy, between 1965 and 1975.

Like a magically magnified set of Playmobil figurines or more humble clothespin dolls, the figures in this year's display are simple and clear — bodies made of columns, with spheres for their heads. There are bright colors, rough textures and whimsical additions: an astronaut, come to bring a moon rock to the Christ child, a centurion called to conversion, a neon light hovering like the mountains over Bethlehem, and a towering angel whose near-translucence allows light through the ribs of its body and its tower-like wings.

Love it or hate it, they say.

I love it. For three reasons. 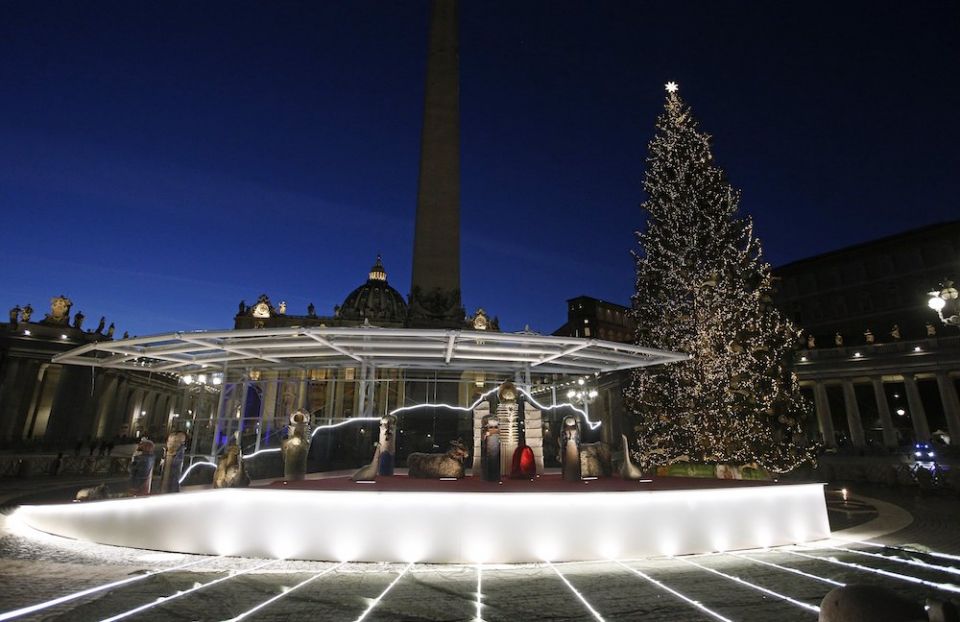 The Vatican's Nativity scene for 2020 is drawing strong reactions. It is set up with the Christmas tree in St. Peter's Square at the Vatican, seen Dec. 14. (CNS/Paul Haring)

First, because I love the simple joy and the playfulness of Nativity sets. Ours is the house where we need to clear off the shelves to display the dozen or so crèches we've received or found over the years. They range from a very figurative set, to handcrafted Nativities in ceramic from Peru and in wood from Malawi, to one composed entirely of rubber duckies.

As a child, my yearly job and joy was setting up the plastic set my mother ordered — without permission! — at her parochial grade school. In the darkness of December in New England, the crèche was a place of magic, where Advent and Christmas became a part of my life, rather than an idea.

It was where the baby Jesus miraculously arrived on Christmas morning, where I endlessly tried to balance the Virgin Mary on the back of an uncooperative camel, and where other toys regularly made an appearance. Care Bears, G.I. Joe soldiers and Transformers regularly came to adore the Christ child, so I'm not that fazed by an astronaut showing up on the scene.

Nativity sets have always been sacramental, making the Christmas story real, just as Francis of Assisi did when he set up the first living Nativity in Greccio. But to do that well, they've also always opened possibilities for play, for creativity and for joy. When I see an astronaut wander into St. Peter's Square, I see the Vatican participating in some of the childlike, unexpected joy of a surprise visitor.

Second, then, this particular Nativity might not be everyone's cup of cocoa; de gustibus non est disputandum ("There is no accounting for taste"), the saying goes. Here, I may be out of my depth — I'm a theologian, not an art critic. But we might do well to think carefully about what we think of as "beautiful" and "ugly" and not confuse those terms with "familiar" and "different," respectively.

I admit I have a soft spot for 20th-century modern art. I love, for reasons I can't quite explain, Mark Rothko's bold colors, Barnett Newman's abstract lines, Marcel Breuer's use of textures and new materials to create unexpected variations on traditional forms.

Not all of these artists were successful in every piece they created or building they designed. But they shared a fundamental conviction that artistic creation is not just the reproduction of familiar past forms but depends on the same experimentation with the new that made Gothic cathedrals, Michelangelo's "Last Judgment" and the current St. Peter's Basilica itself (!) possible.

When someone describes a new church as "not looking like a church" just because it's not Gothic, they're missing out on all the ways we might envision church art and architecture with all the creativity God has given us. 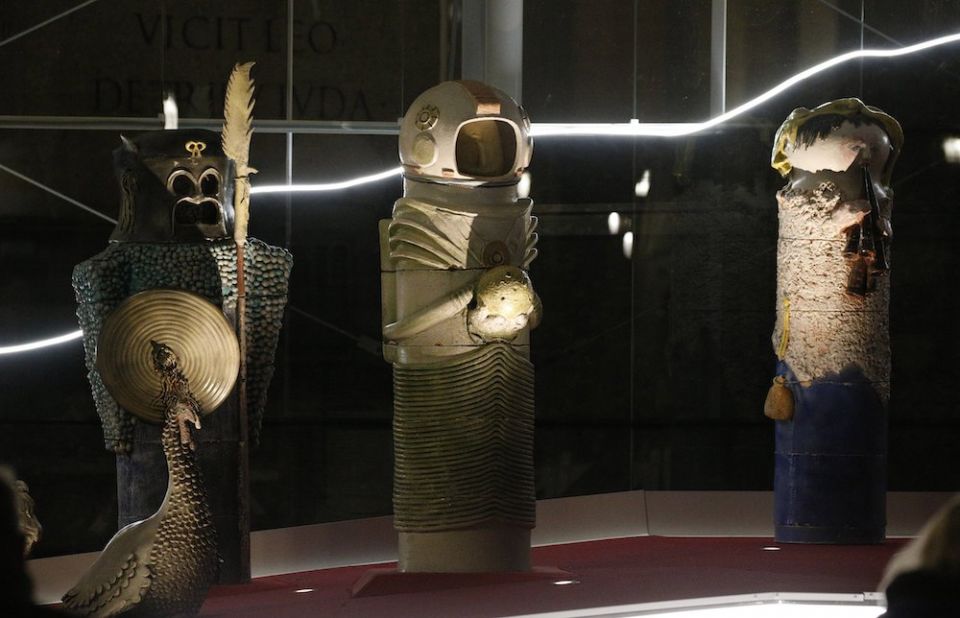 It's not a coincidence that these pieces from the Nativity the Vatican set up this year date from 1965 to 1975, from the immediate post-conciliar period, when both the church and the world looked with hope to the future. This was the era of moon-landings, of new lay spiritual movements, of both recovery of the past and aggiornamento. (CNS/Paul Haring)

You may look at this year's Vatican crèche and decide that you still find it ugly — that's fine! But all I hope is that you look at it first the way you would encounter a new culture, a new language, a new friend. Difference need not equal ugliness.

Third, and finally, the strong reaction against this year's Nativity speaks to me as an ecclesiologist about the continuing tensions within our church about the legacy of the Second Vatican Council and Pope Francis' attempts to rekindle the energy and the hopefulness of that time.

It's not a coincidence that these pieces date from 1965 to 1975, from the immediate post-conciliar period, when both the church and the world looked with hope to the future. This was the era of moon-landings, of new lay spiritual movements, of both recovery of the past and aggiornamento.

They may have been naively optimistic at times, but the Catholics of the post-conciliar period looked both to the past and the future of the church. As Pope John XXIII supposedly said about the church, "We are not on earth to guard a museum, but to cultivate a flowering garden of life." And so the church's embrace of its rich theological, cultural and artistic heritage needs to include embrace of the newness of the Gospel as it takes root today in new generations, new cultures and new artists.

To do that, we need to be on guard against the false aesthetic comforts of nostalgia, but also against the false ecclesiology that the church is changeless — or became so around the year 1600, preventing any further growth or development.

That is not an argument for rapid or radical change, for denial of the dogmas of our faith, or for embrace of newness for novelty's sake. But change in time, development in history, adaptation to new cultures and peoples, is constituent of a living church made up of human beings. The church is called by God to incarnate the Gospel of Christ Jesus in all times and spaces, and through the power of the Holy Spirit it is inspired to do so in unexpected ways.

As the official website of the exhibition suggests, this is "un Presepe per (ri)nascere," that is, "a Nativity to be (re)born." This Nativity, like the Second Vatican Council that partially inspired it, like the papacy of Francis, treasures the past and looks forward toward the continuing adventure of the church as we wait for the reign of God.

Above all else, I love this Nativity, astronaut and all, because it reminds us that the story of the church, the story of the God who is, and was, and is to come, is a story with both a past and a future. 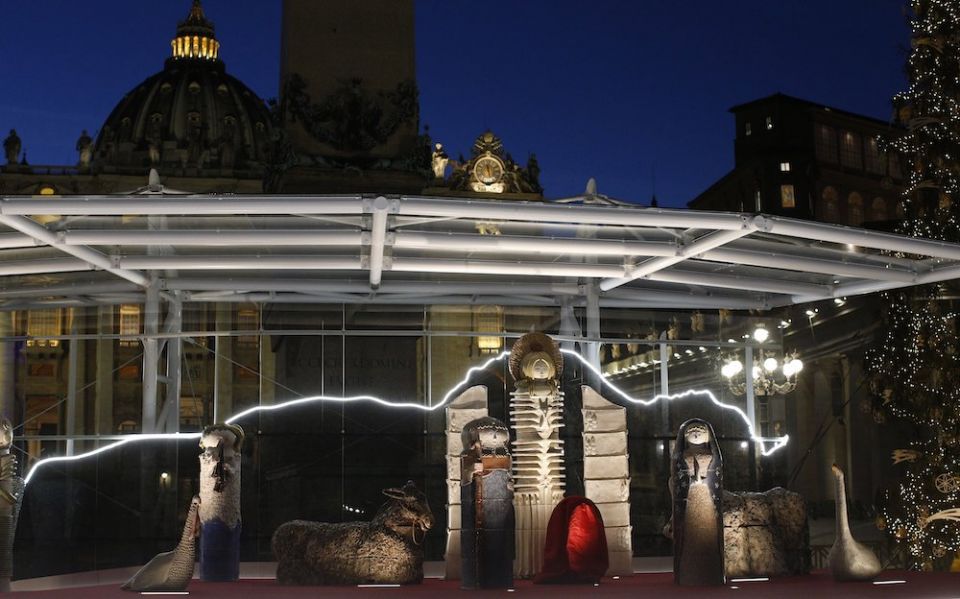 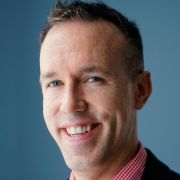 Brian Flanagan is associate professor of theology at Marymount University in Arlington, Virginia. He is the author of Stumbling in Holiness: Sin and Sanctity in the Church and the president-elect of the College Theology Society.