The Amazon synod is about the concept of social sin, not married priests 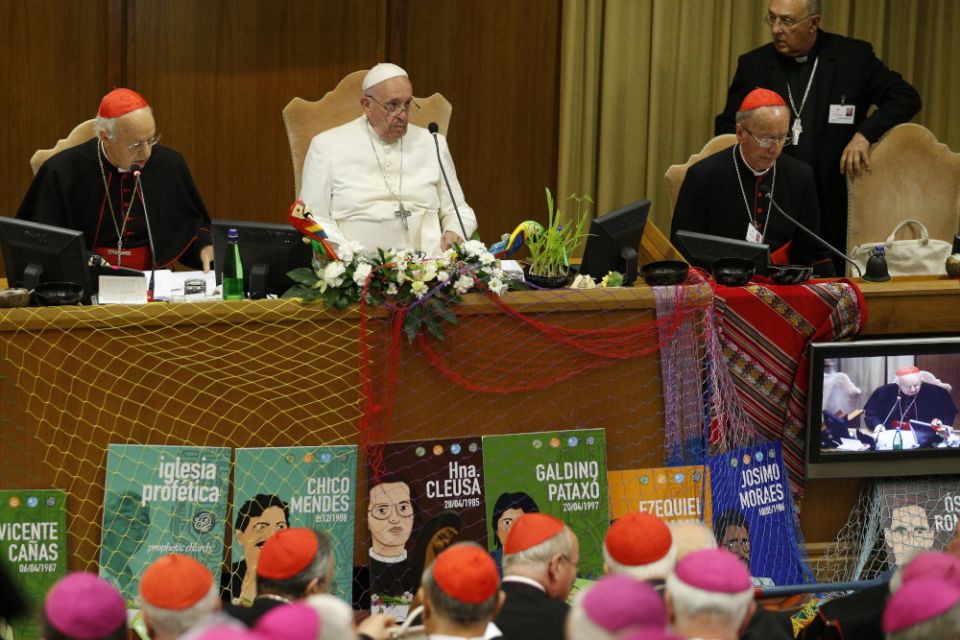 If you relied on the mainstream media, you would think that the three-week synod on the Amazon last month was mainly focused on the issues of whether or not to ordain married men and to restore the female diaconate. It wasn't.

"If we read the outcome document of the synod, we see the ministerial shifts for the Amazon are in part about servicing people so their human and economic rights are protected," says Eric LeCompte, executive director of JubileeUSA. "We read that as Catholics we must protect indigenous communities and our planet. Ultimately, the synod's message is that we all deserve to live in a world where we have enough, and not too much."

LeCompte argues that the synod document puts forward the most robust articulation of the concept of "social sin" since that concept came into official disrepute in the 1980s.

"Much of the Amazon synod's final document can be boiled down to the reality that we are consuming too much," he told NCR in an email. "Whether we live in the Amazon or the United States of America, we all are consuming too much. It's a tough message and it may be the closest the Catholic Church has ever gotten to the reality that there is social sin, that as an entire society — our level of consumption is sinful." This bringing back of the idea of social sin is a significant development in moral theology.

Still, I might put it slightly differently. The Holy Father has set before the church the idea of integral human development. Before the synod began, I registered my preference for the word "integrated" over "integral" because of the latter's hoary pre-Vatican II associations. But, what matters is the idea or, more acutely, the reality: The social and ecological and ecclesial and political are all interrelated, not only in the Amazon to be sure, but interrelated there in such a way that if we do not root out the sin that has permeated these various realities, the region, and with it the whole planet, are endangered.

For the church to help confront the challenges the peoples of the Amazon face, the church must be present, and for it to be present, the church must bring that most distinctive of Catholic practices and beliefs: the sacraments. Indeed, our Catholic sacramental sensibility seems to cohere with the integrated spirituality of the indigenous peoples of the Amazon in ways that are at first somewhat jarring to Western eyes but which, on second glance, appear quite beautiful, and beautiful precisely because they are so different from the hyper-rationalistic, Cartesian sensibilities of us Westerners.

Yet much of the discussion in the U.S. seemed ignorant of the fact that the mesmerizing discussion of ordaining married men and female deacons grew out of this prior discussion of sacramentality in the remote regions of the Amazon. It was not another chapter in our Western culture wars, nor should it be seen as such.

A friend sent a note in which he commented that after 35 years of Communio popes, now we have a Concilium pope, referring to the more conservative and more liberal theological journals created in the wake of Vatican II. Villanova University theologian Massimo Faggioli pushed back against this characterization of the pope.

"Pope Francis is not a Concilium guy," Faggioli told me in a phone interview. "He has none of the technocratic obsession many of the Concilium writers have." It has been a long time since I picked up a copy of Concilium but I do know this:  Francis clearly does not see his role as being the Theologian-in-Chief of the universal church. I recall Msgr. John Tracy Ellis explaining why popes did not choose among different theological schools of thought. "The chair of Peter is many things," Ellis said. "But it is not a faculty chair."

Trying to place a pope in the context of two mostly Western journals fundamentally makes the same mistake as the hyper-focus on gender: This was a synod about the Amazon. Most of the participants were from the Amazon. The issued were discussed and framed in terms of the needs of the Amazon. We in the myopic West want to reduce everything to gender, or race, or ideology, but that is not what was going on in this synod.

The vicious and stupid attacks on the indigenous peoples' spirituality came to a head with the tossing of the statues into the Tiber. Last week, on EWTN's "The World Over," Raymond Arroyo and his papal posse were still fretting about the statues being idols and what became clear is that none of them stopped to ask the indigenous people who brought the statues to Rome in the first place what they signified. Cultural myopia meets bad journalism. It seemed clear to me, and clear to the participants in the synod, that the people who brought the statues were themselves Catholics. Why would you accuse such people of idolatry without even talking to them?

We in the myopic West want to reduce everything to gender, or race, or ideology, but that is not what was going on in this synod.

It is the people who cheered the act of vandalism who are the real idol worshipers: They have made an idol of their conservative sexual ethics. "It is typical of certain Catholics in the U.S.," says Faggioli, "to embrace a narrative that focuses on the wrong markers for defining Catholicism." That is exactly right. (I had almost written "Bingo," another former marker of Catholic identity.)

In addition to the cultural myopia of most American commentators, it is worth looking at another issue that emerged from this synod, and from all of the synods in this pontificate: How does the church change? How does doctrine and practice develop? And we will pick that theme up on Wednesday.

Column | The Amazon synod is about the concept of social sin, not married priests

Pope Francis is still the key to reform

When it comes to the vocal minority, the tail must no longer wag the dog