Archbishop Chaput sees joy in letter from young father, but I don't 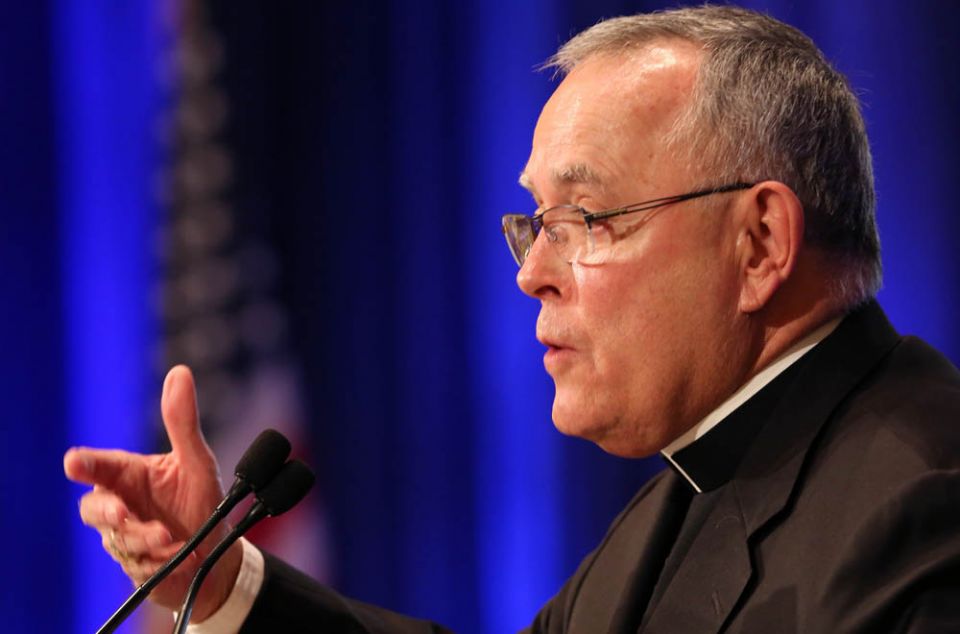 Archbishop Charles Chaput of Philadelphia speaks Nov. 10, 2014, during the annual fall meeting of the U.S. Conference of Catholic Bishops in Baltimore. (CNS/Bob Roller)

The Catholic Twitterverse exploded last week after Archbishop Charles Chaput published at First Things a letter from a 26-year-old father of three small children he had received in the mail. The letter came shortly after the meeting with young people in Rome in advance of October's Synod of Bishops on young people. The archbishop shared it with a wider audience because, "I think that continuing the process of listening to a wide range of young adult experiences is important."

The discussion in emails and Twitter was whether or not the letter was a fake. It smelled a bit fishy, touching almost all of the archbishop's top concerns. If this was a private letter, why would the author refer to "high-profile clergy" instead of just offering the name? Phrases like "banal modern liturgical music more suitable to a failed off-Broadway theater" seem like an odd phrase from a 26-year-old. So, too, the citation to Bishop Robert Barron's use of the phrase "Beige Catholicism." I do not pretend to watch or read everything that comes from the titular bishop of Macriana but I think he stopped using that particular phrase when the author of this letter was in grade school. The phrase "I offer these observations without bitterness or insult" sure sounds like it could have dropped from the pen of Fran Maier, the archbishop's longtime aide. The whole letter seemed to hit all the right buttons, and I do mean right.

I do not subscribe to the theory that this letter was a fake. That would be less disturbing in its way than the sad reality that it is entirely possible there are 26-year olds out there who write and think this way. If you visit enough right-wing websites and listen to enough EWTN, you, too, can become a 21st-century Jansenist.

Consider this checklist of Catholic identity. "We urgently need the Church's clarity and authoritative guidance on issues like abortion, homosexuality, gender dysphoria, the indissolubility of matrimony, the four last things, and the consequences of contraception (moral, anthropological, and abortifacient)," our 26-year-old states. I admit I had to look up "dysphoria." And, I never thought I would say this, but thank God for the four last things, without which this entire list of what young people need is about sex. Is that really what being a Catholic is all about? In Port Royal 400 years ago and in Philadelphia today apparently so.

The Lord Jesus provided His followers with a checklist that offers "clarity and authoritative guidance" about what constitutes holiness. You can find the list at Matthew 25: Feed the hungry, clothe the naked, give drink to the thirty and welcome the stranger, visit the sick and the imprisoned.

This young father does a fine imitation of the elder son in the story of the Prodigal when he writes, "In sum, many of us feel that we're the rightful heirs of thousands of years of rich teaching, tradition, art, architecture, and music." The adjective "rightful" strikes a note that is either self-important or proprietary and the Gospel is about gratuitous grace, is it not? From start to finish, this tome is a modern version of the parable of the two men in the synagogue. This 26-year-old sits rightfully in the front pew praying, "I thank thee God that I am not like other men."

He is not alone up there. Alongside him is His Grace of Philadelphia, who writes of this letter:

"I can add little to that kind of witness. I'll merely suggest the obvious: The future of the Catholic faith belongs to those who create it with their fidelity, their self-sacrifice, their commitment to bringing new life into the world and raising their children in truth, and their determination to walk Christ's 'narrow way' with joy."

It would be churlish to point out that prelates like Chaput are the ones who have put the "narrow" back into "narrow way." I would merely contrast this observation with the recent speech by Cardinal Joseph Tobin at Villanova in which the cardinal rebutted the idea that we should make an ideal of a "smaller, purer Church" and reminded us all that "It is only the Lord who ultimately judges who belongs or does not belong" in the Catholic fold.

And, I wonder why Chaput uses the word "joy" in this context. The most remarkable thing about this remarkable letter is that it is so impersonal, so abstract, so devoid of any emotion, let alone an emotion as profound as joy. This young father feels put upon because he has had to endure some lousy music, because he is only now learning of the Church's ancient and consistent teaching on the primacy of conscience, and that teaching is disturbing his preference for a clarity that allows him to pass judgment on others.

The early Christians were joyful, and they were being flayed alive and thrown to the lions! Chaput and this young father who sounds so much like the archbishop are many things but joyful is not one of them.

Such are my sins, I have always known that I have no business sitting in the front pew, so I do not know what the world looks like from up there. But, the archbishop is wrong, not even complexly wrong, but simply wrong when he asserts the future of the church belongs to this young father and those like him. The future of the church belongs to Christ and to Him alone. And, as Pope Francis reminds us repeatedly, the God revealed in Jesus Christ is most recognizable by His great mercy.

But, Chaput is no fan of the pope. He and the rest of his friends in the front pew do not see the need for this emphasis on mercy in the church's proclamation of the Gospel and that is really all you need to know about why the church has gotten so much smaller on their watch. Christians are joyful, and filled with a contagious joy, when they recognize the Risen Lord as their savior. This bunch is quite confident they have saved themselves.

Column | Archbishop Chaput sees joy in letter from young father, but I don't

My immediate reaction was to back down

Pro-life cause stymied, but not because of court decision