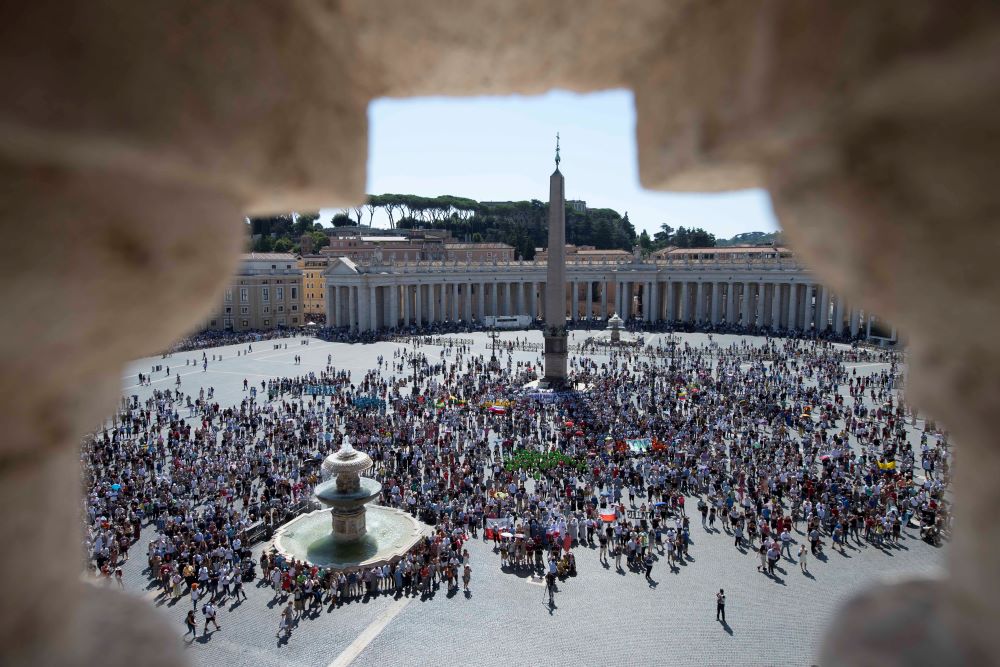 The crowd in St. Peter's Square is pictured as Pope Francis leads the Angelus from the window of his studio overlooking the square at the Vatican Sept. 5. (CNS/Vatican Media)

"And he said to them, 'Why are you afraid, O you of little faith? Then he rose and rebuked the winds and the sea, and there was a great calm." (Mt 8:26)

This passage from the Gospel of Matthew could be spoken today to the early critics of the new document on synodality the Vatican released this week.

Unfortunately, the document prepared by the general secretariat of the Synod—which is accompanied by an even lengthier handbook—will leave readers uncertain of what "synodality" means. So the outcome of the Synod process is unpredictable, and likely to entail more than a small amount of confusion.

Lawler, you see, thinks he has mastered all the riddles of salvation. The Holy Spirit who proceeds from the Father and the Son, whose presence was vouchsafed to us until the end of time (Mt 28:18-20), has evidently retired and left Lawler in charge. And Lawler is no fan of "unpredictability" or, worse, "confusion."

Jeff Mirius, also writing at CatholicCulture.org has a definition of synodality that he likes:

I have long held that there is one, and only one, proper understanding of the term "synodal" when applied to the Church. For the Church, finding a "way together" means that each member of Christ's Body properly discerns and actuates his role in the Body, his gifts for the Body, and his opportunities to strengthen the Body under the headship of Christ.

The language is a little new agey for my tastes, and reads like something from an employee manual at an internet start-up: "actuates his role?" Yuck. While Mirius is correct that synodality requires discernment, it is puzzling why he views it in such an individualistic manner. Less puzzling is the lack of a call to conversion, which synodality also entails. (The document calls specifically for "synodal conversion" at Paragraph 2.) Of course, if you have all the answers, there is not much need for conversion, is there?

That same paragraph is quite explicit about the necessity of relying on the Holy Spirit:

A basic question prompts and guides us: How does this "journeying together," which takes place today on different levels (from the local level to the universal one), allow the Church to proclaim the Gospel in accordance with the mission entrusted to Her; and what steps does the Spirit invite us to take in order to grow as a synodal Church?

Addressing this question together requires listening to the Holy Spirit, who like the wind "blows where it wills; you can hear the sound it makes, but you do not know where it comes from or where it goes" (Jn 3:8), remaining open to the surprises that the Spirit will certainly prepare for us along the way.

Conservative critics of Pope Francis have made it clear: They do not like surprises. But the cardinals of the church, having sung the "Veni creator spiritus" as they began their deliberations to elect a successor to St. Peter in the Sistine Chapel in 2013, delivered a surprise to the church. It is evident to most of us that the Spirit had a rather large hand in the surprise election of the man we know as Pope Francis.

Over at The Pillar, Ed Condon was fretting about the synod too (emphases mine):

… some aspects of the synodal process appear likely to foster division in the Church, and introduce controversy in areas of settled teaching.

… the synodal process appear likely to foster division in the Church, and introduce controversy in areas of settled teaching.

While the calls to revisit settled aspects of doctrine and discipline have not been reflected in the papal magisterium, or in the pope's post-synodal apostolic exhortations. ...

Condon writes like a not entirely sober betting man who told his bookie, "I’ll put all my money on 'Settled Teaching' to win." And tells him it again and again.

The preparatory document is more hopeful about the presence of the Spirit in the life of the church. One of the 10 "thematic nuclei" it articulates is called "Discerning and Deciding." It states, "In a synodal style, decisions are made through discernment, based on a consensus that flows from the common obedience to the Spirit."

Obedience to the Spirit. Not to the age. Not to whim. Not to some nonecclesial agenda.

It has long been evident that the critics of Pope Francis are in fact hostile to the ongoing reception of the teachings of the Second Vatican Council. They admired Pope John Paul II insofar as they thought he was trying to put the reforming toothpaste back in the tube. I think that is an unfair reading of a complicated pontificate, but he really did reduce synods to exercises in repetition and theological sterility. How did that work out?

Francis was elected to bring reform to the church, and synodality is a central part of his agenda to achieve that reform. That may frighten his critics, but it shouldn't frighten anyone who believes what Jesus said about sending His Spirit and remaining with the church until the end of time.