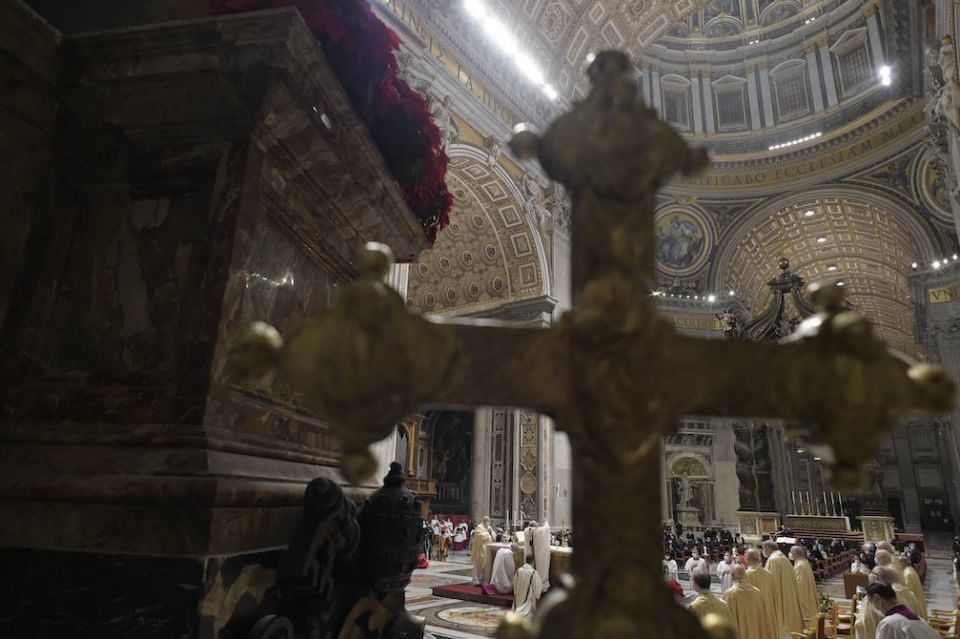 A cross is seen as Pope Francis celebrates Christmas Eve Mass, which was not open to the public, in St. Peter's Basilica at the Vatican Dec. 24, 2020. (CNS/Vatican Media)

At the end of January, Pope Francis delivered an important address to participants in a meeting of the National Catechetical Office of the Italian Bishops conference. It warrants attention from all the local churches because it shows, I think, why the opposition to Francis is rooted in the desire to put the Vatican II toothpaste back into a pre-conciliar tube.

In the address, the pope presented an understanding of catechesis that is so far from the dry appeals to chapter and verse that tend to characterize a certain kind of apologetical, conservative Christianity. "Thanks to the narration of catechesis, Sacred Scripture becomes the 'environment' in which we feel part of the same salvation history, encountering the first witnesses of faith," Francis said. "Catechesis is taking others by the hand and accompanying them in this history. It inspires up a journey, in which each person finds his or her own rhythm, because Christian life does not even out or standardize, but rather enhances the uniqueness of each child of God."

Contrast that approach with this essay by then Archbishop, later Cardinal, Raymond Burke regarding Canon 915 and denying Communion to pro-choice politicians, posted at the EWTN online library. He writes that "the question regarding the objective state of Catholic politicians who knowingly and willingly hold opinions contrary to the natural moral law would hardly seem to change from place to place."

In Burke's world, it is easy to tell the sheep from the goats, there is no grey, no ambiguity, and no sense of the mysterious workings of grace that, sometimes, take a lifetime to come to fruition. Who needs pastors? Just distribute the catechism, which is apparently self-explanatory. Burke is not a Protestant preaching "Scripture alone," but a Catholic preaching "Catechism alone." Francis could not be more different.

The second section of the talk deals with the nature of receiving Vatican II, and it is a barnburner. The Holy Father quoted his predecessor, St. Pope Paul VI, who in 1971 addressed the first International Catechetical Congress, saying: "It is a task that is constantly being reborn and constantly renewed for catechesis to understand these problems that arise from the heart of man, in order to lead them back to their hidden source: the gift of love that creates and saves." Francis adds, "Therefore, catechesis inspired by the Council is continually listening to the heart of man, always with an attentive ear, always seeking to renew itself."

Related: Francis: 'No concession' to those who deny Vatican II teachings

Renewal is not reinvention. The council did not plop out of the sky. The reforms were built upon the ressourcement, the return to the sources of Christian doctrine, the Scripture first and foremost and secondly the writings of the church fathers. You can spot a follower of the council, irrespective of their ideology, quite easily: They, like those early Christians, display wonderment at the amazing claim at the heart of our faith, the Crucified lives, the tomb is empty. That is why Francis is so appealing, is it not? He talks and acts like one who has believes the tomb is empty.

Francis continues, and I cite this paragraph in its entirety:

It is imperative that all of us, not only the catechists, think ecclesially, think with the church, and that means drinking deeply in the theological wells of Vatican II. There is no other path forward that keeps the church together and keeps it true to itself.

In the immediate post-conciliar period in the U.S. it was the Catholic left that ran amok, exercising "selectivity with respect to the Council," and often being punished by ecclesiastical authority for it.

Now, it is conservative Catholics who not only find themselves in dissent from the teachings of the council, but who openly disparage it or reject it outright. Last year, disgraced former nuncio Archbishop Carlo Maria Viganò made it clear in an open letter that his difficulties were as much with Vatican II — he calls it at one point "the coup d'etat of Vatican II" — as with Francis. Viganò's rantings are published and celebrated on a variety of conservative media outlets from LifeSiteNews to EWTN, bypassing pastoral relationships and normal ecclesial channels of communication.

This we must remember: Behind the opposition to Francis is opposition to Vatican II. The church in Latin America from which the pope came has been the locus of the most fertile theology since the council. The bishops there have received the council in ways we in the north have not, and it is time for us to listen and to learn. They have never stopped posing the question: What does it mean to exercise a preferential option for the poor?

In the third and final section of his talk, the pope highlights the need for community. It is a beautiful reflection, and I encourage you to read it.

All three sections really point the way forward for Catholics: We need to continue the process of receiving Vatican II and find genuine renewal and reform in dialogical, synodal, faithful reflection upon those texts. In church history class, they taught us that it takes about 100 years to receive a council, so we are only about halfway there. We have had some detours already. It is time to get back to work appropriating those magnificent texts and making them our own.