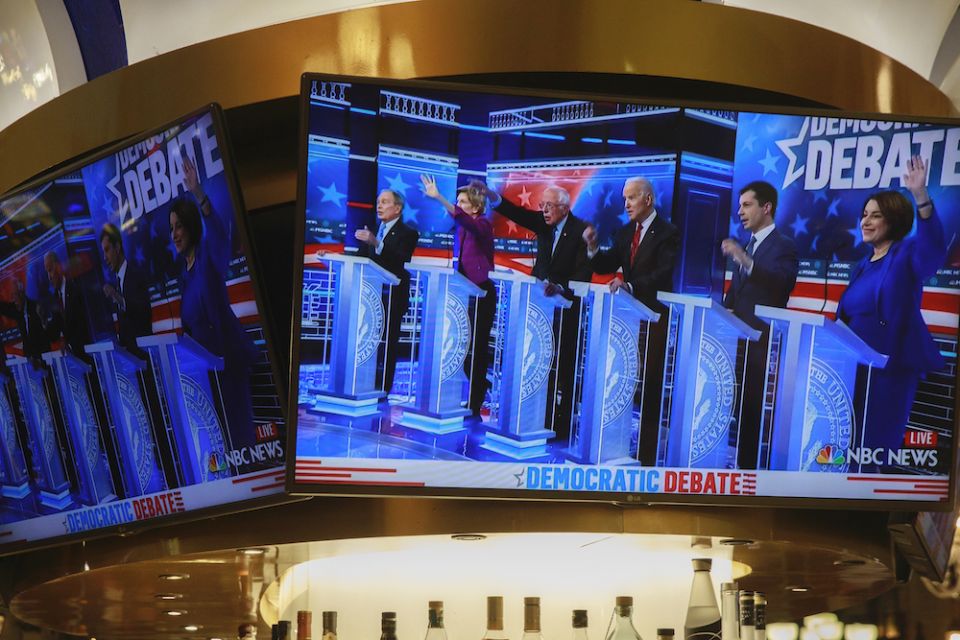 Democratic candidates are shown on television in a bar at a casino near the Paris Theater during the Nevada Debate in Las Vegas Feb. 19, 2020. (Newscom/SOPA Images/Sipa USA/Jeremy Hogan)

Tomorrow, the good people of Nevada, at least those who are Democrats, will get to add their voice to the selection process for a Democratic presidential nominee. Actually, there were four days of voting earlier in the week, voting that occurred before the Feb. 19 debate, and turnout was strong. After three days, 36,000 people had voted, nearing the halfway mark to the turnout of 84,000 in 2016's* one-day of voting.

Finally, we come to a state that is not overwhelmingly white. Indeed, whites are less than half the population of Nevada. According to the U.S. Census Bureau, 29% of the population is Latino, 10% is black, 9% is Asian, and whites are 49%. Latinos are also the backbone of the Culinary Workers Union, 60,000 members strong and the largest political powerbroker in the state. They are also overwhelmingly Catholic. Former Vice President Joe Biden desperately needed their endorsement, but they declined to endorse anyone. They did warn against Sen. Bernie Sanders because of his support for Medicare for All. In any event, this will be the first chance candidates Pete Buttigieg, Michael Bloomberg, Sen. Elizabeth Warren and Sen. Amy Klobuchar get to face a majority-minority electorate.

The principal problem with the Democrats this year is that too many primary voters decided to morph into Mitt Romney. As President Barack Obama's 2012 campaign senior adviser Dan Pfeiffer argued in an essay at Politico this week, if you singularly focus on the need to defeat the incumbent and do not frame the election as a choice between two futures — and frame the state of the economy, too — you lose. I have been making that argument all year, yet poll after poll indicates that the quality Democratic voters most want in a candidate is the ability to beat President Donald Trump. And that bloc of voters tends to break for the three B's — Biden, Bloomberg and Buttigieg. Klobuchar, who bombed in her backyard in Iowa but beat expectations in New Hampshire after a strong debate performance, is trying to appeal to those most concerned about electability, too. All four are running as the anti-Trump, and none of the four has done a whit to reframe the discussion of the state of the economy.

In Wednesday night's debate, the biggest difference from previous such encounters was the presence of Bloomberg on the stage. It did not turn out well for him. Immediately to his left, Warren began hammering him with questions and follow-ups for which he was not only unprepared, his answers were dismal. The video clip that was going to go viral had to do with the undetermined number of non-disclosure agreements Bloomberg has made with former female employees. He allowed that maybe he had made a joke they did not like. Millions of women, millions of Democratic women, rolled their eyes and said to themselves, "A joke? We call that harassment." Biden jumped in as well. It was devastating.

Bloomberg was equally dreadful on other issues. When discussing why he has not released his taxes, he prefaced his excuse by noting that he could not use TurboTax. How many viewers do use TurboTax? His job was to introduce himself as a regular guy who is very successful, not a condescending snob, better to say a kind of urban rube. The one question he had to know was coming concerned his support for the stop-and-frisk policy while mayor of New York City. He apologized in a monotone that conveyed precisely no emotion, apologizing for the outcome, not for the policy itself. Warren pounced.

Other dynamics were quite different, and I will get to them anon. The point of consistency was Sanders. In every debate, he is the same. He is always on message. Some of his messages continue to be weak: His defense of Medicare for All always starts with pointing to other countries with single-payer systems, but most Americans actually do not care how much Danes or Swedes pay for their health care. He never interjects a personal story to demonstrate the limits of markets in the provision of health care. He is not wrong, but he is ideological, and he is abstract. This does not cost him anything with his core of supporters, but he needs to find ways to attract additional support. His finest moment came when he was asked about being a socialist and explained that we already have socialism for the rich. We saw that in the bank bailouts during the 2008 economic meltdown. It is the poor for whom rugged individualism is the standard. Amen.

In the New Hampshire debate, Warren was subdued, disappearing from the conversation for long periods of time. Her claim to be a fighter was betrayed by her lackluster performance. Wednesday, she came loaded for bear. In the post-debate analysis, CNN commentator Van Jones remarked that Bloomberg came to a gun fight with a knife, but Warren came with a Howitzer.** She also took shots at Klobuchar and Buttigieg that reminded voters their claims to moderation were actually an example of thinking small when the problems are large. At one point, she intervened to defend Klobuchar, an action that had the benefit of making the point that she was not simply an angry person, but a person with passion. Just as importantly, Warren found ways to return to her central theme, that corruption in Washington prevents the kind of large, structural changes the country needs if we are to arrest the income inequality, the proliferation of automatic weapons, rising prescription drug costs — all of which threaten the common good. The post-debate consensus was that she won the night, and her campaign team had to wish that the debate had happened before the early voting began in Nevada.

It is not clear that Warren's strong performance can bring in the kind of money she would need to put up ads in some of the expensive media markets that are in play on March 3, Super Tuesday. Bloomberg's spending spree has had the effect of making ad purchases even more expensive than usual. But she accomplished something else Wednesday: She emerged as the only person with the potential to unite the party. Her decision not to attack Sanders, even when goaded to do so, demonstrated her awareness that she is no longer auditioning for the progressive lane but for the party unifier lane.

Buttigieg's success has always been a bit of a mystery to me. Wednesday night, his prepackaged, consultant-driven, poll-tested riffs, which had seemingly succeeded in past debates, were suddenly off-pitch to everyone. A friend who has texted me about every single debate to say he liked Buttigieg texted me Wednesday night that he found the mayor's sermonettes "creepy." Buttigieg tried to lay a glove on Klobuchar, and she spanked him with the best line of the night: "I wish everyone was a perfect as you, Pete." Ouch. Buttigieg did deliver the second-best line of the night. When asked about the prospect of Bloomberg and Sanders being the final two candidates in the race, he said, "Let's put forward somebody who's actually a Democrat!" It was funny but also a good dig, showing how, in their different ways, both men are not in the mainstream of the party. Still, Bret Stephens' verdict in The New York Times seems accurate: "The mask slips: Behind the polished debate champ there lies a polished debate champ."

Klobuchar's usual folksy funniness abandoned her Wednesday night. Her gotcha lines fell flat, seemed too contrived. Her discussion of policy was not devoid of passion, but it is hard to rile up a crowd when you are asking the party to settle for so little in terms of policy — a tweak to health care, a notch in the tax code. Her continued reliance on claims that she passed 100 bills as a senator are weak and need to be replaced with vision. To sustain the momentum she had after New Hampshire, she needed a good night and she did not get it.

"The big loser though was Bloomberg who was painfully unprepared, out of his league and, frankly, shaking in his boots for most of the night. Klobuchar perhaps committed the opposite sin, overpreparing — replacing her greatest asset, her authenticity, with canned ham," observed Stephen Schneck, longtime politics professor at Catholic University of America and now the executive director of the Franciscan Action Network. "Three candidates benefit from the shellacking of Bloomberg and the misstep by Klobuchar: Sanders, Biden and Warren. Sanders has his stride, dodging the oft-repeated attacks on his policies with a practiced hand. Biden probably benefits simply from being out of the line of fire and speaking less. Warren would benefit most if Bloomberg and Klobuchar slip."

Many of the candidates made policy-specific pitches to minority voters, but no one used a question to deliver a vision of how the Democratic Party can and should contend with historic injustices, work at leveling the playing field, but doing it in such a way that they do not appear like a pander bear. Whoever achieves that in next week's South Carolina debate will likely pick up a few points, and it is most essential for anyone trying to present themselves as a person able to unite the party.

But before that next debate and the candidates head to the Palmetto state, the voters in Nevada will deliver their own verdict. Who will win and who will lose is anybody's guess, and the expectations' game matters as much as the raw vote totals. Look for Sanders to continue to stoke his momentum. The rest is impossible to say, considering the introduction of early voting, the Bloomberg spending spree and the effects of last's night's feisty debate.

*The date has been corrected from an earlier version.

**Due to an editing error, this sentence has been updated.