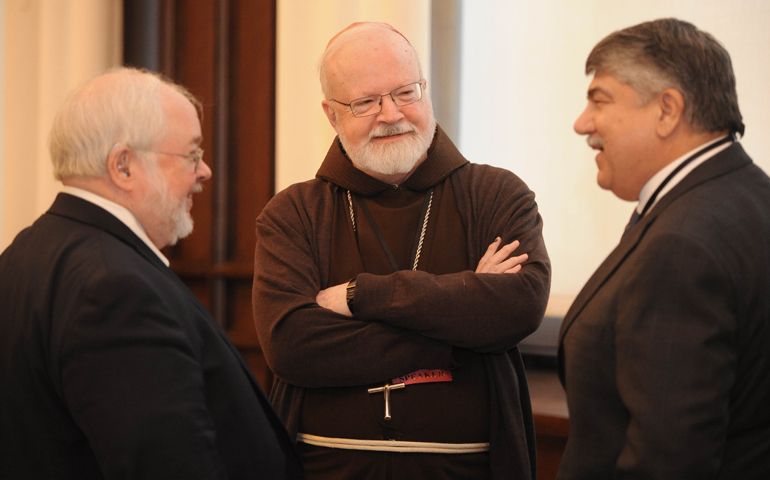 John Carr, director of Georgetown University's Initiative on Catholic Social Thought and Public Life​, left, Cardinal Sean O'Malley and Richard Trumka, president of the AFL-CIO, at the Jan. 10, 2017, conference, "Erroneous Autonomy: The Dignity of Work," the third in a series of conferences sponsored by the Institute for Policy Research & Catholic Studies at Catholic University in Washington, in partnership with the AFL-CIO. (Courtesy of The Catholic University of America)

Last week, I linked to an article at National Review online by Ed Whelan, President of the Ethics and Public Policy Center, in which Whelan wrote in opposition to the United States Conference of Catholic Bishops' amicus curiae brief. That brief supported the position of public sector unions in the upcoming Supreme Court case Janus v. AFSCME (American Federation of State, County and Municipal Employees).

Whelan wrote that, "Both as a Catholic and as a lawyer, I find the USCCB's brief badly misguided in important ways." I am not a lawyer, but I am curious as to why Whelan thinks he should oppose the brief "as a Catholic." He seems to mistake both Catholic social doctrine and the facts of the case.

Whelan argues that the bishops should not have compared this case to Roe or Obergefell, even though "the attentive reader will discern that the brief implicitly recognizes that how best to defend the legitimate rights of workers is, unlike the matters of abortion and marriage, a matter of prudential judgment on which Catholics can in good faith disagree." This is a false categorization and can easily turn prudential judgment into a get-out-of-jail-free card for people who dissent from church teaching. In fact, public policy issues always involve both a moral principle and prudential judgment.

For example, all Catholics must be opposed to abortion, but we can disagree about how to proceed politically. Those of us who have been involved in pro-life advocacy for a long-time can recognize how important it has been to beat back the idea, once prevalent, that the pro-life movement was somehow anti-woman. In recent decades, the bishops have been consistent in linking their support for protecting the unborn with demonstrated concern for women facing crisis pregnancies. So, even though candidate Donald Trump mouthed pro-life sentiments, and as president he has undertaken pro-life policies at the edges, his repeated examples of misogyny make him not only an unlikely champion of the pro-life cause, but could set back the pro-life movement over the long haul.

Similarly, Whelan asserts that he assents to the church's teaching about the right of workers to organize but that he supports a ruling that would cripple them because public sector unions behave badly, they oppose vouchers or other school choice initiatives that harm Catholic schools, and some of them even support candidates who favor abortion. He was especially upset that AFSCME, the union in this case, donated a large sum to the Planned Parenthood political action fund. I was upset, too. Regrettably, labor unions have been under attack from Republican legislatures and governors and have turned to Planned Parenthood's political arm for help. Those donations are for voter files, campaign organizers, and the like. In any event, prudence can question such donations, but it can't obliterate the Catholic principle that workers have the right to organize.

I understand why teachers' unions see school choice programs as a threat: My mother taught in an inner city public school and used to complain that the Catholic school siphoned off some of the best students and most engaged parents, which made her job all the more difficult. When I moved to Washington and had neighbors who saw the local Catholic school as a life saver, indeed the only life saver, for their children, I came to understand their value. Reading the research of Nicole Garnett and Peg Brining about the amount of social capital Catholic schools bring to a neighborhood, I became a full convert to the Catholic school program. So I disagree with union opposition to vouchers and the like, but I understand it and, most importantly, I do not believe workers lose their right to organize because they take a different political stance from me.

To quote Pope Benedict XVI, "prudence demands humble, disciplined and vigilant reason that does not allow itself to be dazzled by prejudices; does not judge according to desires and passions, but seeks the truth — even uncomfortable truth." Trimming the teaching of the church in order to achieve the political result one wants is the opposite of prudence.

We need prudence to decide when pro-life candidate A, who sounds good, may not be able to accomplish what she promises on that issue, while pro-choice candidate B may be awful on abortion but is unlikely to have much to do with the issue and could cause grave harm in another area of moral concern. But, in this Supreme Court case, no one needs to pit the church's commitment to life against its commitment to workers' rights because our nation's grievously flawed abortion law is not at issue.

Bishop David Zubik of Pittsburgh made an important point regarding unions taking positions a member disagrees with in his column this week. "The man who brought the lawsuit took a union job, agreed to the union terms, and then sued on free speech grounds because he objected to the union's political positions. … As a union member, he has the right to argue within that union for what he believes," the bishop wrote. "I urge any Catholic union member to push for reform of union policies that may occasionally be unjust or wrong-headed. That's democracy at work. But if the Supreme Court rules that union political advocacy violates the free speech rights of someone who has agreed to a union job, that ruling will threaten any organization that takes a stand on any issue."

Bishop Zubik's column also makes an important point about what a negative ruling in this case could mean for the Catholic Church and the importance of intermediate social organizations like churches and unions. He knows from where he speaks, as he was the lead plaintiff in the lawsuits against the contraception mandate in the Supreme Court case Zubik v. Burwell. I shall address this issue on Friday.

Whelan seems unclear about the facts in this case. Janus is not arguing that he should not have to contribute to a fund from which political donations are made to groups of which he disapproves. If AFSCME suspended all political donations tomorrow, Mr. Janus' agency fee would not be altered by a dime. The fee represents his share of the costs of negotiating a contract and enforcing it, nothing more or less. He argues that even those activities are inherently political and therefore unconstitutional "forced speech." But, if he wins his case, then the other members of the union must pay more because Janus is getting a "free ride." To my mind, that is no different from stealing intellectual property.

Sometimes, when discussing government funding for Planned Parenthood (which I oppose), the argument is made that "money is fungible." If the government gives Planned Parenthood money for cancer screenings, then the organization has more money to perform abortions. There is no such issue in this case. State law dictates that the union totals the amount spent on representation of the workers, and divide it by the number of workers involved. That is how the agency fee is determined. Again, if public sector unions ceased all political activity, the fees would not change. So, this case is not about AFSCME giving money to Planned Parenthood. It is about the court being asked to value Mr. Janus' conception of his own autonomy and place that ahead of all the other workers' decision to form a union. His is a libertarian argument. As the bishops' brief noted, Janus' case is "a misguided effort to protect one individual from government coercion [that] would leave only individuals to stand against government (or economic) coercion." I am surprised that Whelan buys into it.

I previously noted a mistake, and a large one, in Whelan's article, in which he alleged the brief cited previous statements from groups that were not really from bishops, mentioning the National Catholic Welfare Conference's opposition to the Taft-Hartley Act in 1947. From 1922 until 1966, the bishops' conference was known as the National Catholic Welfare Conference, so the brief's citation was to a document from the bishops.

Whelan replied with a post that has since been taken down. I called over to National Review and asked why the post was taken down, but no one called me back. In that post, Whelan repeated the charge that the staff at the USCCB had run amok and, as evidence, he pointed to a statement by Bishop Thomas Paprocki of Springfield, Illinois, in which Paprocki repudiated the brief. Paprocki questioned whether the brief reflected the will of the bishops because "no vote was taken on whether to file such a brief." I have been covering meetings of the bishops' conference for 20 years, and I do not ever remember a vote being taken on whether or not to file a brief. The reason the bishops have a permanent secretariat, and structures such as an executive committee and committee chairs, is so that they can respond in real time to issues like filing an amicus brief. In this instance, I am told that the relevant committee chairs and many bishops were consulted. I am reasonably certain Paprocki's metropolitan, Cardinal Blase Cupich, was consulted because a talk he gave to the Chicago Federation of Labor was cited in the brief. This was not an example of the staff running amok. In fact, the brief is so deeply rooted in Catholic teaching I wonder if anyone thought there was much need of consultation. Paprocki wants to do what Janus wants to do, overturn a group decision he did not like.

On Friday, I will return to the issue of why, as Catholics and as Americans, we should all be hoping the unions prevail in this case and why the bishops' brief hits the nail on the head.