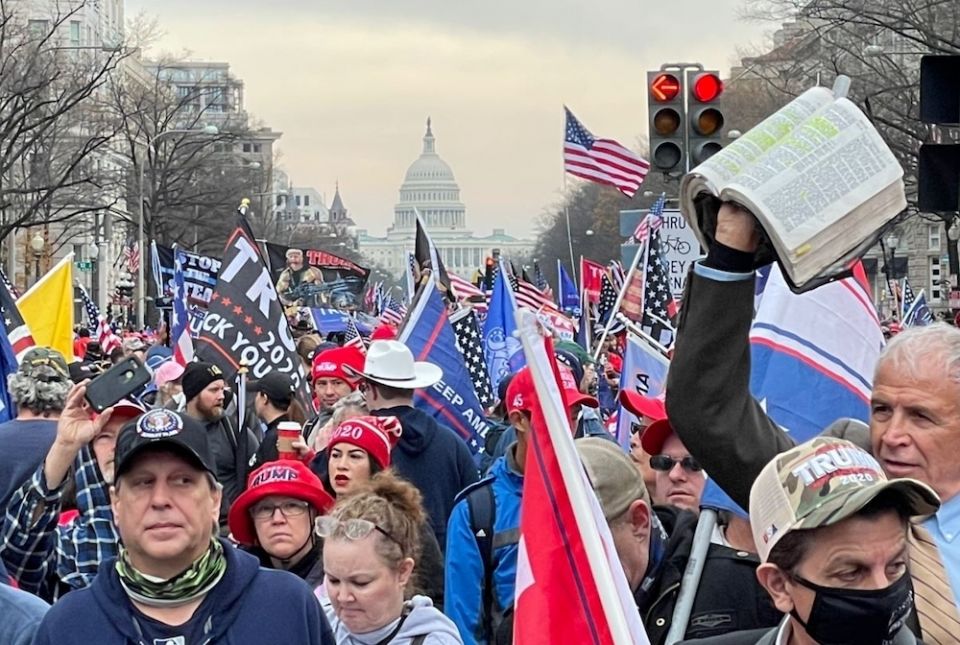 People march in Washington, D.C., in support of President Donald Trump, Dec. 12, waving flags and Bibles. The second such march following the election, it included a religious element, the Jericho March's "Let the Church Roar Prayer Rally" on the National Mall. (AP/sptnk)

It isn't every day that you see a Catholic priest, in this case Fr. Greg Bramlage of Colorado, standing on the National Mall in the nation's capital, pronouncing prayers of exorcism (it starts at min. 18).

"Wow, wow, wow. That is some weird Catholic stuff," said the emcee at last Saturday's "Jericho March," Eric Metaxas, after Fr. Bramlage completed his prayer. "I don't know if I believe that, but this is an ecumenical gathering. If you believe in Jesus, I am all in."

Nor do you expect to hear a disgraced former ambassador to the United States, in this case Archbishop Carlo Maria Viganò, appearing at the same event via video feed (min. 59). He wedded the biblical story of Jericho to his penchant for QAnon conspiracy theories, saying, "We are the silent army of the children of light. … The walls of the deep state, behind which evil is barricaded, will come crashing down." His Manichaean worldview fit the temper of the rally, but it has never fit with Catholic orthodoxy.

After a long rant by conspiracy theorist extraordinaire Alex Jones and several evangelical preachers, Fr. Frank Pavone comes on screen to offer a prayer of thanksgiving (at 3 hours and 31 min. into the program) that included this: "Oh God, we praise your loving providence, by which you have always protected your people in distress. We thank you for the United States of America, which you have preserved through many trials and have blessed with the greatest president we've had, Donald J. Trump. Time and time again, you've given him victory over his enemies, who are absolutely certain he could not ever win, who spied on his campaign, misused federal intelligence agencies against him, fabricated lies about him, launched fake investigations and impeachment proceedings, and undermined the integrity of our elections. Lord, you have given President Trump victory over all these enemies, and we ask you to give him and us victory once again."

Fr. Pavone lives entirely in that alternate reality in which up is down and down is up.

And what off-the-charts bonkers religio-political event would be complete without an appearance by Bishop Joseph Strickland of Tyler, Texas? The good bishop was looking away from the camera, in profile, like a 1940s movie star. This time, however, Strickland did not play exclusively to type. His prayer was among the more normal of the bizarre day, knee-deep in Christian nation nonsense, but at least not obsequious when speaking of the nation's most conspicuous sore loser. Still, the presence of a Catholic bishop, a successor of the apostles, at this jamboree of conspiracy theory carnival was shocking. (His part, also on screen, starts at 3:53:18 with the Sign of the Cross.)

Should we be alarmed by events like the "Jericho March" Dec. 12? Yes and no. Religion should be at least a little bit weird to those outside. Anti-Catholics from the first century to the present have attacked our central act of worship as cannibalistic. I will never understand how my Jewish friends go without pork.

And politics has gone completely screwy the past few years. The speakers at the "Jericho March" were not the only ones to suggest that Joe Biden is a socialist, a suggestion that could scarcely be more absurd. And you do not have to be a born-again Christian to believe that the election was stolen.

Nor is it true that evangelical and Catholic collaboration necessarily ends in the kind of zaniness we witnessed in Washington last week. The Circle of Protection lobbying effort brought together a variety of denominations, including evangelicals and Catholics, to defend programs that ameliorate poverty and that could scarcely be more consistent with the New Testament.

Still, the core problem with the conservative iteration of the alliance of throne and altar is that it always reduces religion to ethics and thence to politics, and does so in such a way that it harms the reputation of both.

It wasn't long after the Rev. Jerry Falwell started Moral Majority in 1979, a political action committee for evangelical Christians, that the blustery Baptist noticed something he had not anticipated. Many of the dues-paying members of the organization were Roman Catholics. Falwell had, in classic Southern Baptist fashion, often denounced Catholicism for the many and varied ways it had strayed from primitive Christianity, as he understood it. But the goal of Moral Majority was political, not ecclesial, so Falwell welcomed the papists with open arms.

In 1994, the group Evangelicals and Catholics Together (ECT) was started by Fr. Richard John Neuhaus and evangelical leader Chuck Colson. Much of the initial focus was on avoiding conflict in mission work, but the political ideology of the group was clear from the beginning: "Americans are drifting away from, are often explicitly defying, the constituting truths of this experiment in ordered liberty," their founding document stated. "Influential sectors of the culture are laid waste by relativism, anti-intellectualism, and nihilism that deny the very idea of truth. Against such influences in both the elite and popular culture, we appeal to reason and religion in contending for the foundational truths of our constitutional order."

The focus on culture-war politics in the U.S. only grew as the ECT developed. The group jumped on the religious liberty bandwagon early and their shared opposition to same-sex marriage was a defining moment. As I noted at the time, they should consider renaming themselves "Evangelicals and Catholics (Angry) Together." I did not see in 2015 that the tone of resentment that marked their anti-gay statements was paving the way for an embrace of the politics of Donald Trump. Now that connection is clear — and revolting.

More worrisome than the "Jericho March," at least in the short term, is the planned "Christmas Day Uprising," an effort to convince Catholics to ignore the dangers posed by COVID-19 and pack their local churches on Christmas Day, flaunting social distancing guidelines and other public health restrictions. The expansive understanding of religious liberty has become one of the cornerstones of the evangelical-Catholic alliance, and the essential libertarian understanding of the First Amendment's free exercise clause that alliance champions is offensive to both constitutional principles and the teaching of the Second Vatican Council.

It is an ironic fact of history that the loudest Christians in America are the ones who never pause to consider God's transcendence of our human affairs, never question their inability to unravel the mysteries of salvation, and divide humankind into good and evil camps as if the Master had not taught that the measure by which we judge would one day be applied to us. Their embrace of Trump shifts the moral assessment from ironic to pitiful.

It falls to us liberal Christians to remind the culture that our awesome God will not be mocked by enlisting him in partisan campaigns, that the economy of salvation is always shrouded in the mystery of God's grace. Politics is an important part of life, but it is only a part.

A push for compromise on LGBTQ protections may tear evangelicals apart

Should Trump worry about white Catholic and mainline Protestant votes?