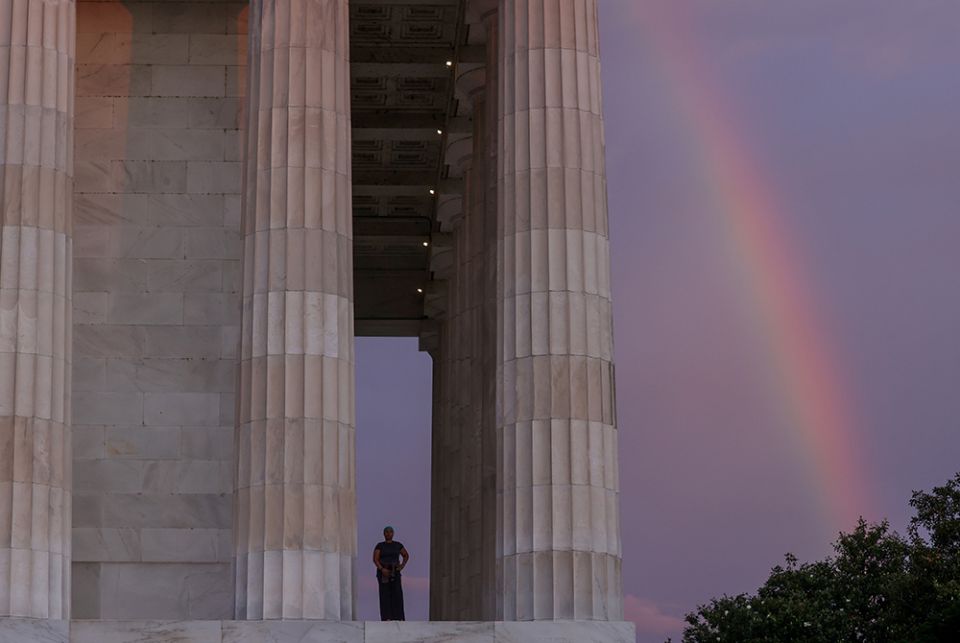 A rainbow appears behind the Lincoln Memorial in Washington June 19, 2020. The date, known as Juneteenth, honors the end to slavery in the United States and is considered the longest-running African American holiday. (CNS/Jonathan Ernst, Reuters)

Evanston, Illinois, passed a city ordinance last month that is the nation's first civic enactment of a race-based reparations program. The city recognized the role housing discrimination, known as redlining, adversely affected the ability of Black residents to accumulate wealth. Black residents who lived in the city between 1919 and 1969 can apply for a program that would give them $25,000 towards a real estate purchase or home improvement.

The Evanston City Council's decision was not without controversy. In advance of the vote, some conservative critics questioned the legality of the program, voicing complaints similar to those made against affirmative action in hiring and college admissions. They do not think current discrimination should be permitted in order to correct the ill effects of previous discrimination. That objection confuses formal equality, which can exist merely on paper or in theory, with real equality, a confusion that has beset some Enlightenment thinkers — and their critics — for centuries.

A smarter critique from those who oppose the idea of reparations under any configuration would be the charge of anachronism. In his essay on Johann Gottfried Herder in the book Three Critics of the Enlightenment: Vico, Hamann, Herder, Isaiah Berlin warned against "the dangers of cultural arrogance — the tendency to judge ancient societies in terms of modern values." Our culture, or at any rate many of our academics, have grown comfortable wielding anachronistic weapons to make a point, even if it is always a cheap point that is made. That is one of the problems with anachronistic thinking: It is so unmoored that it is as useful to the propagandist as to the philosopher.

Most curious are the objections from some African American academics and activists, who claim the Evanston program gets off on the wrong foot. In The Washington Post, authors A. Kirsten Mullen and William A. Darity Jr. argued that the Evanston program did not even constitute a true reparations program. "The cause of justice demands proprietariness about the meaning of 'reparations,' and we object to these kinds of piecemeal and misleading labels," they write. "True reparations only can come from a full-scale program of acknowledgment, redress and closure for a grievous injustice." They advocate society-wide reparations for slavery with cash payments from the government of $5 trillion.

Alas for Mullen and Darity, no one gets to own the word "reparations," or the concept, and it is worthwhile thinking through the issue, which is surely going to become a hot potato in the culture wars. Among the most persuasive recent articles advocating for reparations for slavery I would include SUNY-Binghamton history professor Anne Bailey at The Conversation, Penn State's Joshua Inwood and University of California Berkeley's Anna Livia Brand, also at The Conversation, and Rashawn Ray and Andre Perry at Brookings.

The word reparations became prominent after the Treaty of Versailles demanded reparations from defeated Germany for having started World War I. The reparations, like the other treaty provisions, were political, not judicial, which is to say they did not pretend to treat all equally but were an example of winners punishing losers, of might making right.

Statues of Justice show a woman with a blindfold, but none of the victors at Versailles wore blindfolds. The statesmen at Versailles knew whom they were punishing. The financial payments made for good politics back home even while they left the German economy a wreck, which only served to breed political extremism. We all know where that led. So, reparations got a bad name in the 1920s and '30s.

The other usage of the word comes from judicial proceedings, and refers to the recompense ordered by the court in a tort proceeding. If someone has been wronged, and a financial payment can ameliorate or compensate the victim of the wrong, the court orders the perpetrator of the wrong to pay a reparation. This is a judicial, not a political, understanding of reparation and it is what is classically known as commutative justice.

For it makes no difference whether a good man has defrauded a bad man or a bad man a good one, nor whether it is a good or a bad man that has committed adultery; the law looks only to the distinctive character of the injury, and treats the parties as equal, if one is in the wrong and the other is being wronged, and if one inflicted injury and the other has received it. Therefore, this kind of injustice being an inequality, the judge tries to equalize it; for in the case also in which one has received and the other has inflicted a wound, or one has slain and the other been slain, the suffering and the action have been unequally distributed; but the judge tries to equalize by means of the penalty, taking away from the gain of the assailant.

It is specific, the way a tort claim is specific. The Georgetown University reparations program, which helps the descendants of 272 enslaved persons the school sold in 1838, is similarly specific. As is the Evanston program. 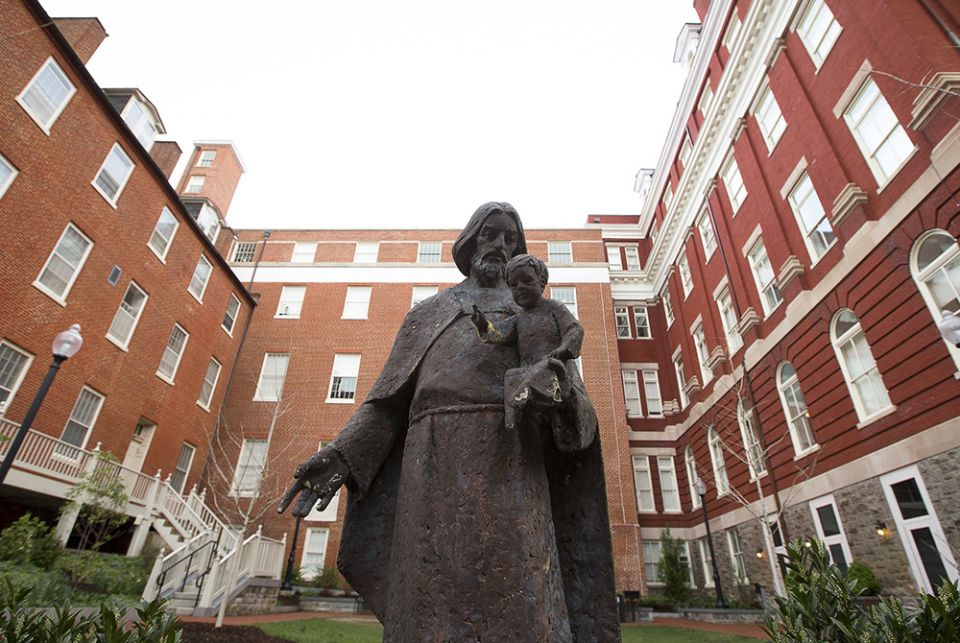 Mulledy Hall, also known as Freedom Hall, center, is seen April 4, 2017, on the campus of Georgetown University. The building has been renamed after Isaac Hawkins, the first enslaved person listed in the Jesuit university's documents on its selling of slaves. (CNS/Tyler Orsburn)

Aristotle's distinctions enter the Catholic intellectual through the writings of St. Thomas Aquinas who, in Question 61 of the Summa Theologica, the Second Part of the Second Part, distinguishes commutative from distributive justice. I have been asking theologian friends for weeks if they know of a book or even a long article that examines how commutative justice intersects with distributive justice, the other variety of justice Aristotle identified. No one has found me anything on the topic.

The more recent concept of "transformative justice" obfuscates this difficulty, but the concept is so far ill-formed. For the purpose of this column, let me note that the idea of transformative justice emerges from the experience of the Nuremberg trials that were designed, in part, precisely to avoid the kind of society-wide blame assigned at Versailles in the form of reparations. The literature shows a conflation of politics and justice — which definitely was part of the motivation at Nuremberg — lending some of the pristine moral status of justice to the always less elevated tasks of politics, where interests and the allocation of power compete with moral concerns. Like all conflations, this leads to confusion.

Any society-wide, generalized program of reparations for slavery would need to focus on exactly this point — what kind of justice is being achieved — and to do so in ways that account for the intergenerational character of the harm.

It is clear that Black Americans suffered from slavery and that emancipation did not end the disadvantages they faced. But, with the passage of time, other factors came into play; history moves on. Additionally, it is obvious that racism, which still sickens our society, was not slayed with the passage of the 13th Amendment to the Constitution.

How, then, do you erect a reparations program for slavery of the kind the activists and academics noted above advocate? The short answer is: You don't. The descendants of Russian serfs, who belonged not to a person but to the land, or of Italian messadri, poor sharecroppers, or Mexican campesinos, bear no personal responsibility for chattel slavery in the American South. Expecting those descendants to pay for a reparations program with their tax dollars would not only be unjust, it would be a political disaster.

In the essay noted above, Inwood and Brand argue that the roots of much of America's contemporary economy are rooted in the slave economy, so that it should be relatively easy to determine what the descendants of those slaves are owed. Certainly, large parts of the antebellum economy were rooted in slavery, and even in the North there were various points of contact and complicity. But the argument ultimately is akin to that of the anti-abortion zealots who complain that you cannot take a vaccine derived from a cell line from an aborted fetus. With clear exceptions, like that which inspired Georgetown University's reparations program, whatever connection exists only rises to the level of remote, material cooperation with, or appropriation of, the evil of slavery.

Any scheme for society-wide reparations for slavery encounters difficulty not only in determining who should pay, but also in determining who should receive the reparation. If we stipulate that slavery is the source of the grievance, and we make a payment to the current generation, would not a yet-unborn child suffer from the effects of slavery too? What if the child's parent received the reparation and placed it in a bad investment? Do we, as a society, owe nothing to that child, for whom racism will not have vanished?

Finally, there is the political hurdle. We live in a highly polarized society, fraught with political landmines on racial issues. If 42,921 votes in Arizona, Georgia and Wisconsin had gone the other way last November, Trump would have tied the Electoral College and doubtlessly won the vote-by-state delegations in Congress. The most surprising part of Trump's ability to keep the 2020 election close was the degree to which he improved his numbers among Black and Latino voters, for whom Trump's language of opportunity, success and patriotism was more attractive than the language of racial grievance that dominates the politics of the left. The advocates for slavery reparations are knee deep in the language of grievance and, no matter how understandable that sentiment is, it is political suicide.

Rather than a strained, tendentious advocacy for slavery reparations, progressive Catholics should work for for candid, forceful government policies that confront racism today. They may, or may not, support organizations like Georgetown University and cities like Evanston that wish to provide reparations for past specific injustices. Combating racism is more obviously political than judicial. It lacks the moral dignity the word "justice" confers. Defeating racism will be arduous and complicated, it is cultural as well as political, it will take time and a variety of approaches. But a politics aimed at alleviating the ill-effects of racism is highly moral and the "justice" offered by reparations is a veneer. Veneers are insubstantial things. Black Americans and others who continue to face the injustices of racism deserve more than a veneer. So do we all.

Column | In the fight against racism, reparations are not the answer