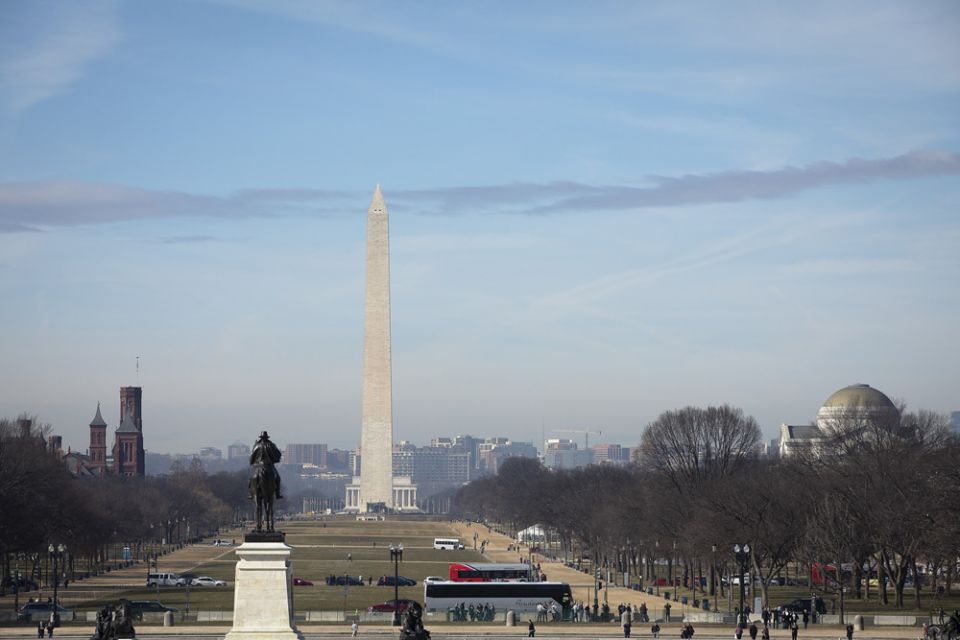 The Washington Monument in Washington is seen Feb. 5. (CNS/Tyler Orsburn)

Salvador Rizzo, one of The Washington Post's fact-checkers, looks at the liberties Attorney General William Barr took in describing the results of the investigation by Special Counsel Robert Mueller. I understand and agree with Speaker Nancy Pelosi's reluctance to begin impeachment proceedings against the president, but what about the attorney general? His misrepresentations were in a letter to Congress, and while they were not made under oath, a case can be made that it was still an instance of lying to Congress which is a crime. More on the Mueller report tomorrow.

Every once in a while, The New York Times surprises. This beautiful op-ed by Peter Wehner on what it means to worship a crucified God is one of the finest reflections I have read at Passiontide. People rightly recognize the many ways our Christian faith is at odds with the spirit of the age, but nowhere is the difference more thoroughgoing and defining than on the experience of suffering.

Also at The New York Times, a deep dive by Emily Badger and Claire Cain Miller into the ways young people are developing their political views in the Trump era. It doesn't look good for Republicans: Even self-identified Republicans are more liberal than their parents. But, two things are worthy of note. First, what does the designation "liberal" means to these young people? Is it based on an understanding of democracy, a commitment to economic justice, or does it rely mostly on culture war issues? Second, events change history and worldviews. No one knows what the next few years will bring, so while Trump's election was seismic, yet more seismic events may shape these young people's views.

At the National Committee for Responsive Philanthropy, Jeanné Isler displays a lack of self-awareness that is every bit as comprehensive at the similar lack she is accusing others of exhibiting. First she writes that, "As a Roman Catholic who has visited Paris many times, I was sad to learn that Notre Dame Cathedral was burning. But I became angry when I saw how quickly 'lovers of humanity' mobilized money for rebuilding a building in contrast to the sluggish pace at which institutional philanthropy moves money to human beings." OK. We get it that your job is to call attention for the need to raise money to help human beings, but if you don't understand the pride and love that the poor feel for the great cathedrals which, alone among great works of architecture, belong to them as much as to the wealthy, you really are reducing the poor to their material needs. And, then Isler writes this: "The speed of the philanthropic response to support Notre Dame's repair exposed the hypocrisy of a sector that too often claims an inability to move quickly. This incident shows that philanthropy has the resources and the ability to support urgent social justice and movement-building work, but chooses not to." Hmmm. Ever wonder if there is not something more deeply wrong here, Ms. Isler? Ever wonder what economic injustices created all these wealthy philanthropists in the first place?

At Commonweal, George Dennis O'Brien has made a fine contribution to the discussion about paradigm shifts in the history of the church. Do they really happen or is the concept incongruous with a church that holds a deposit of faith? How are they akin to, or different from, paradigm shifts in the world of science? O'Brien introduces many useful complications to the discussion and helps all to avoid simplistic and ideological positions that do not hold water. Just a splendid essay.

At Politico, Peter Canellos on President Trump's idiotic comments while visiting Mount Vernon. As Canellos points out, it would be a mistake to attribute modesty or humility to Washington, who was punctilious about managing his public persona. But, Canellos correctly observes that Washington exhibited some of the finer attributes of his age, specifically its concern for legacy, while Trump is the ultimate child of all that is worst about our age, his vainglory and reptilian need for instant gratification.

The second night at the GOP convention

'Catholics for Trump' puts Fr. Frank Pavone back in the spotlight