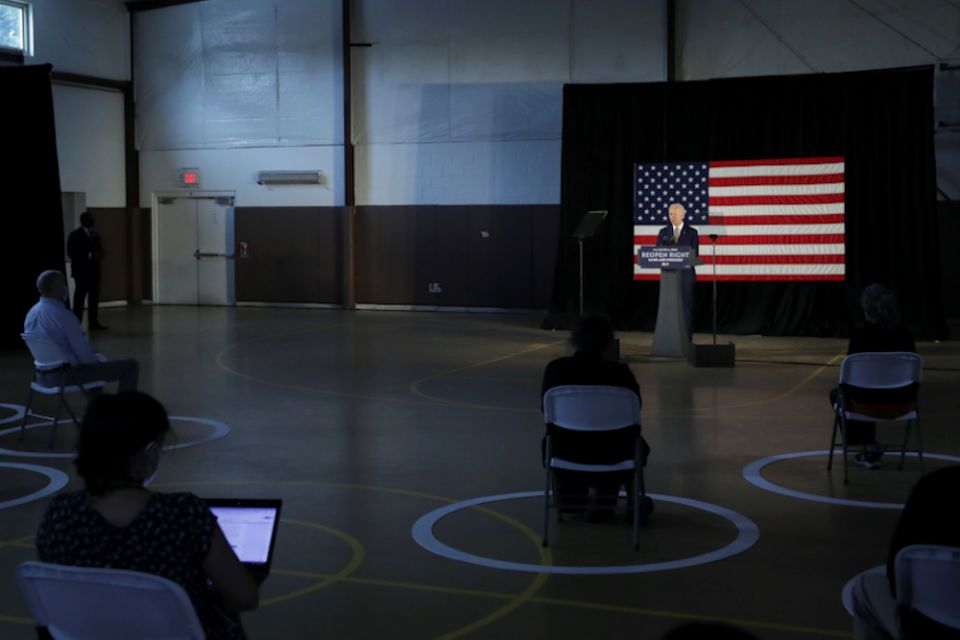 From the Omaha World-Herald, Daniel DiLeo and Thomas Kelly of Creighton University spank Nebraska Gov. Pete Ricketts, and school him in basic principles of justice and Catholic social teaching, after he threatened to withhold funding for counties that require people to wear masks in county offices. What is up with these Republicans in positions of responsibility being so unwilling to demand simple inconveniences from the electorate in order to defend human lives?

From NBC News, as Joe Biden narrows his search for a running mate, several polls indicate that Black Americans prefer Sen. Elizabeth Warren, who is white, over Sen. Kamala Harris, who is black. Outspoken advocates may insist on Biden choosing a woman of color, but outspoken advocates tend to be self-appointed. Biden needs to energize young voters, with whom he struggled in the primaries, and they will not be impressed by Harris' corporate-friendly resume.

Relatedly, in The New York Times, Frank Bruni makes the case for Sen. Tammy Duckworth to become Biden's running mate. The Iraq war veteran who lost both legs in combat might be a perfect counterpoint to President Donald Trump's faux-leadership, and Duckworth has a winning personality to be sure. But would she excite young people who really want to see progress on issues like universal health care and combatting income inequality and protecting the climate? Her life story is exceptional but her politics have always seemed exceedingly normal.

At Politico Magazine, a fun look back at the previous political conventions held in Florida. I had forgotten all about the disappointed Tampa strippers who actually lost business in 2012 when Mitt Romney and the GOP came to town. By and large, conventions are like vice presidential selections: They usually only matter when they go terribly wrong.

In prepping for a recent podcast, Commonweal's Matt Sitman discovered a reprint of a splendid essay by Alexander Chee about his time working as a cater-waiter in New York City and, specifically, at the homes of Bill and Pat Buckley. Mrs. Buckley raised money for the treatment of AIDS at St. Vincent's Hospital in New York City at a time when her husband was advocating mandatory tattoos for people infected with HIV. It is nice in these fraught times to remember that people are complicated.

In The Washington Post, E.J. Dionne looks at some of the demographic reasons Biden has opened up such a big lead over Trump. It is true that younger people, including younger white people, are more liberal on racial issues, and more of them are now eligible to vote. I wish Dionne had included a warning in his piece: Hillary Clinton's campaign counted on demographic changes to put them over the top. You still need to convince people to give you the keys to the car.

Hulu was criticized for pulling an episode of "The Golden Girls" that deftly updated the "Guess Who's Coming to Dinner" theme, that is, it struck a blow against racism, not for it. Movies and television often played a role in undermining bigotry: Think of "Auntie Mame" and "All in the Family." The current cultural climate needs to allow artists to be creative, and that means willing to risk a mistake.

At Commonweal, a 1938 interview with the great philosopher Jacques Maritain. His perceptions of the situation in Spain after the triumph of Franco, as well as his views on the U.S., fascinate. These words read as if they had been spoken yesterday:

At present the materialism of the modern world is such that a measure of this sort would, in my opinion, involve the danger of aggravating the evil it proposed to remedy. As long as the democracies have not rediscovered and purified their vital principle, which is not the individualistic liberalism of the bourgeois age, but rather a heroic sense of the dignity of the human person, the measures which they might take against the freedom of expression of their citizens, in order to preserve liberty, would run the risk of turning against liberty, of protecting only vested interests, and of serving fascism or communism or both at the same time.

His subsequent remarks about the need to be mindful of both foreign propaganda and of lies only add to the surreal "been here before" sensation one gets reading this. Kudos to Commonweal for reprinting this fascinating interview.